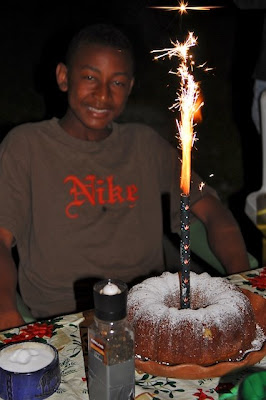 Two of our closest Ugandan friends died this past year, Dr. Jonah in December and our neighbor John Mukidi in May.  Both were men we met within days of our arrival in Uganda in 1993.  Both were the kind of people who would be genuinely concerned for our welfare, who would share meals and life, who would advise and listen, who would include us in their family celebrations, and we included them in ours.  This kind of friendship is rare, particularly cross-culturally, and we lost much as they died.  And though they died months apart, from very different causes, both are having major remembrances this week.  Yesterday was the second death rite for John Mukidi, his oluku, the official end to the period of mourning, as he takes his place as an ancestor.  And tomorrow we will head to Bundibugyo Town's main protestant church for a memorial service for Dr. Jonah.
So in between those two events, today, we had an interlude devoted to life rather than death.  Mukidi was from the generation preceding us, Jonah was our peer, and now we are left looking to the next generation.  We celebrated the 14th birthday of our friend Ivan, a boy who has found his way into our hearts and lives as our kids' friend (Jack's best friend).  His mother left him to re-marry after his father's life crashed around alcoholism, and when he's not at our house he lives with his young uncle in a small room behind a commercial clinic in Nyahuka.  By God's grace this boy has maintained humor and perseverance and hope in the face of a chaotic and disappointing life.  Tonight we cooked a great meal, and sat by candlelight under the bougainvillea, with a sparkling candle on the cake and a few simple gifts.  The moment of focus, of specialness and appreciation, does not come often in most kids' lives here.  Ivan has been a great gift to our family.  Tonight was no exception, sandwiched by mourning we exhaled for this evening of celebration, the affirmation of ongoing relationship and a new generation of hope.
Posted by DrsMyhre at 8:32 PM

Hi to the Myhres. I just wanted to tell you again how much I appreciate you sharing your lives with us through your posts. I eagerly check your blog site each morning in hopes of finding a post, and every time I read your remarkable stories I feel so moved emotionally as I get to experience from afar all that God is leading you through - the joys and sorrows, the celebrations and mournings, the excitement and challenges. I pray especially this week that the service for Dr. Jonah will be more encouraging than sad not only for your family, but for Dr. Jonah's wife and children and others in Bundibugyo who knew and loved Dr. Jonah. I am so glad to read that your children are doing well despite the obvious struggles of growing up in general, as well as the unique challenges they face in everyday life there in Africa. Your stories of daily life there are always so beautifully written, so full of descriptive details that I feel I am almost there myself, and your perspective and attitude always encourage me to keep my eyes fixed on Jesus. Your family and all those there in Bundibugyo are daily in my prayers With love - Cindy Nore

I am in awe everytime I read your blog. Thank you for making the lives of the people you work with "real" and not a statistic.

God has blessed you with amazing talents of writing and photography. Maybe one day you could publish a book based on this blog. I, for one, would buy it.

God bless and keep up the good work