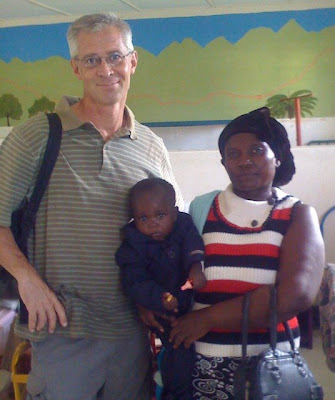 Pictured above, Dr. Scott with Baby Scott, the first child born in our new Pediatric-Maternity ward a year and a half ago. He was born to an HIV-positive mom who took her prophylactic medication, weaned him to goat's milk provided by the Matiti project at age 6 months (she also named the goat Scott, by the way), and ended up with a healthy uninfected boy. He came to greet us in the clinic today sporting a spiffy suit, so we had to snap a photo.

More encouragement today: first patient in line, Kambale, growing and thriving, the little boy whose mother struggled to find her way home from Northern Uganda and deposit all her children with her own mother a week before dying of AIDS. Her act of bravery and kindness saved Kambale's life, at least for now, as his competent illiterate little old grandmother faithfully maintains his medicines. Next, one of my patients missed clinic and his mom just asked for a medication refill . . . because he started school. This was a child whose life hung in the balance for months as a baby. Now he's healthy and big enough to go to kindergarten. Later an unfamiliar-looking 13 year old girl was shown into my exam room, with records from Kampala where she had been on ARV's through a Baylor/Mulago initiative. It took me a while to realize she was one of our first diagnoses of HIV, many years ago. She also is healthy and strong and attending school, but has moved back to the "village" with her mother.

Who would have imagined that our AIDS patients would provide the clearest view of God's redeeming mercy, of hope?