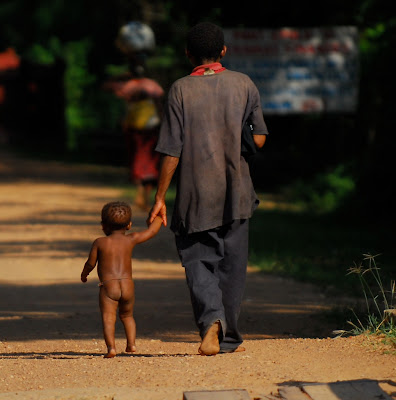 We have been traveling in Eastern Congo for almost a week, but without internet access, so all the posts have been piling up. Short version: flew to Bunia, drove to Nyankunde where a mission hospital is being resurrected, and then Epulu to see the famed Okapi Reserve. Back via Oicha and Beni. About 640 km of driving through an area that has been known for war, destruction, rape, and death on an unprecedented scale over the last decade-and-then-some (in the last year we've been to Rwanda, South Sudan, Gulu, and now East Congo, sort of have a theme going). But also a region that is rich in mission history, and on the verge of re-emergence. In most of the place, life goes on, as it ever has, in simple subsistence and family, work and worship. When the troubling conflicts are acknowledged, they are uneasily relegated to outside influences. The MONUC presence is muted, behind brick walls and barbed wire, and probably resented. And in this place where missionaries laid down their lives, countless Catholic priests and nuns and then the faith-based American missions we visited in Bunia, Nyankunde, Oicha, and Beni, in spite of much darkness the Kingdom holds on, both in people and in institutions. It is easy to be bleak and critical about Congo from afar, even from just over the border where we've watched. Our original "Africa Team" calling as we came out of college was to invest in the Batalinga of Eastern Congo, until we found out they are the same as the more numerous Babwisi of Western Uganda where World Harvest asked us to go instead. And as it turned out, in spite of our own rebels and Ebola and other heartaches, Bundibugyo has been a more stable base, and we see God's mercy in giving us that place to love. But a part of our hearts has always listened and ached for Eastern Congo, and now rejoices to see much good here.
For the long version, read the six posts below.
Posted by DrsMyhre at 9:58 PM

I can't wait to read all these posts!!! Congo! Always wanted to adventure there too. Only made it to Japondi.
Mary Ann

WONDERFUL to have you back. Your posts are such sustenance to my spirit. I am so glad you had a happy birthday present worthy of you and your service. And I am praying for you as you say your farewells and finish up your affairs in Bundibugyo. What a wonderful gift you have given and leave behind. What an exciting prospect of future service as God's hands. Blessings on you all. Judy in HMB