Scott and I both opt to begin the day around 7:30, checking on critical patients before rounds. Which is a good thing, because we're almost immediately called about a transfer from Naivasha. A strike-effect, a very sick baby lands our way. Throughout the day the combination of an increase in patient volume (one man went to ICU after 36 hours of bouncing from one non-functional hospital to another after his road traffic accident) and the considerable decrease in functioning work-power. 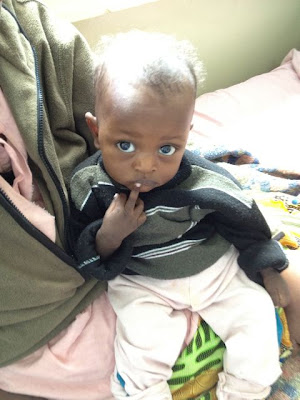 This cheerful little girl spent over three weeks on our service, as the TB therapy finally kicked in and she began to come back to life. This was her first day without an oxygen mask on her face, and I just had to take her photo. Though the endless stream of malnourished, dwindling, gasping, struggling little people can get depressing, the wonder of watching most of them move from lethargy to life makes it worthwhile. 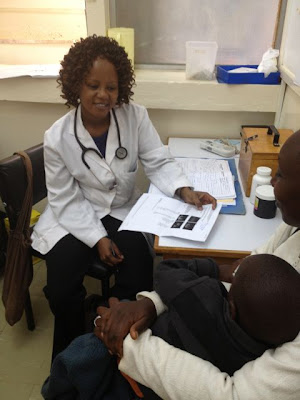 My team is down to Lillian, the Clinical Officer who works full-time week-days in Paeds, and me. The strike is harder on people like Lillian than anyone else. Our 20-ish patient service used to be shared between her, a medical officer ntern (doctor) and one or two clinical officer interns, who would all review some of the patients and present them, or follow up labs, or write up new admissions. Now she tries to come in early, too, to see as many patients as she can, and we review all of them and then finish up together. Lillian is bright, caring, cheerful, competent, willing . . everything you would want in the person you spend most of your days with. So one of the blessings of this strike is working with her. After rounds we go to the Maternal and Child Health clinic where we see patient after patient again. And keep checking in with ICU, casualty (emergency), nursery, the floor. I'm called to private clinic to see a sick missionary baby, and to the neurosurgical ward to help with a deteriorating four year old. It's non-stop. 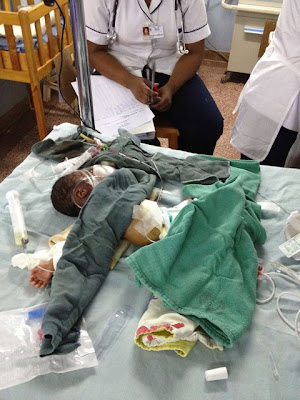 In the late afternoon I find out that one of the preemies in nursery has dangerous levels of jaundice and needs an exchange transfusion. This baby temporarily dies while we are putting a line in her umbilical vein, requiring CPR. I try and explain what's happened to her anxious parents. Then the charge nurse and I begin the tedious process of removing her blood volume and replacing it twice over, a teaspoonful (5 ml) at a time. After a short time the line fails to work and I am rescued by the ever-patient paeds surgery resident, who helps me replace it. At first I am relaxed and chatting with my nurse about Christmas but the baby once again begins to have a falling heart rate, and it takes all our care to keep her alive through the procedure. My advent devotions pointed out that if Jesus could come to Bethlehem, God can show up anywhere, so we should expect him in the hard places. Once again the exchange transfusion reminds me of a crucifixion, a small innocent person spread out and pinned down, lots of blood, what looks like murder and turns out to be life-saving. 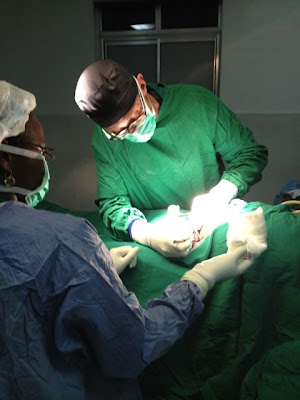 I hand the baby over to the nursery nurses several hours later, because at the last minutes of the exchange the OB nurses want me in the operating theatre, where Scott has gone to do a C-section. It's about 8 pm. A small perk of shared OB/Paeds call is we keep meeting over babies. This time the mom has failed to push the baby out and the baby's heart rate is falling. Scott extracts her surgically, untangles the umbilical cord from around her neck, and hands her over to me. 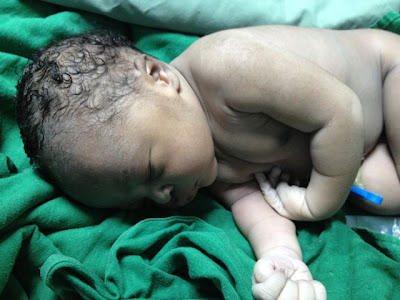 Another perk of no interns: the happy moments are mine alone, a healthy baby who could have died and is now squalling and strong. But no time to linger, the preemie in the nursery needs more support post-transfusion, and another baby keeps forgetting to breathe. Then I remember that hours ago I'd been called to go to an admission in casualty. 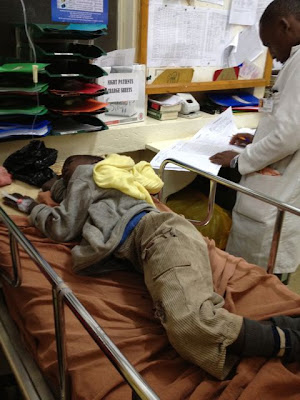 This is our most interesting patient of the night, a six-year-old Maasai boy who was perfectly normal and well until a couple of days ago, when he began to bleed. in his eyes, his gums, his skin, his vomit, his urine, his stool. Being from Bundibugyo my first thought is ebola, and my second was along the lines of the ER docs that he had leukemia. But he just wasn't that sick. His platelet count turned out to be 1000, which is a half a percent of normal. Frightening. But the words ITP popped into my head, hopefully from the Spirit, and I decided to gamble on treating him for an immune disorder. We admitted him for a blood transfusion and steroids and protection from trauma, hoping he can avoid bleeding somewhere critical like his head before his platelet count recovers. Saw a couple more kids there, one in severe heart failure for admission, one who had swallowed a ten shilling coin, which is smaller than a dime and worth about that much. 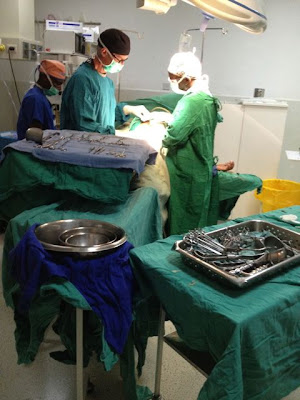 Then back to the operating theatres, where Scott was doing another C-section. This mom had had a previous c-section, and now was carrying twins. She was supposed to deliver at the district hospital, but due to the strike was sent here, which likely saved all three lives. She had massively dilated blood vessels covering her uterus and could have bled to death. 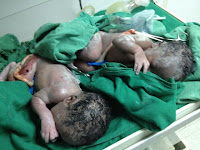 Instead she had two identical boys. Lovely. 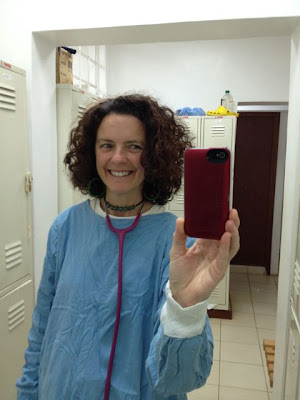 Earlier in the day I passed a visiting prayer warrior, Jeanne B, in the hall. We first met umpteen years ago when we were working at Kijabe temporarily, because she comes with her retired pathologist husband for 3 months every year. She said, "How can I pray for you today" and I said "pray for my attidtude". So this photo is for Jeanne, I snapped it in the theatre dressing room on the way out, because I know her prayers were with me. 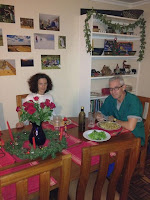 One admission to ICU, and back to see the sickest patients in ICU, Nursery, ward, last check-in at Casualty and then, just after midnight, I came home. Scott had been able to help the kids with dinner hours ago, but not eaten, so they left us each a nice plate of spaghetti and green beans and salad, and we sat down to eat our first meal since breakfast. 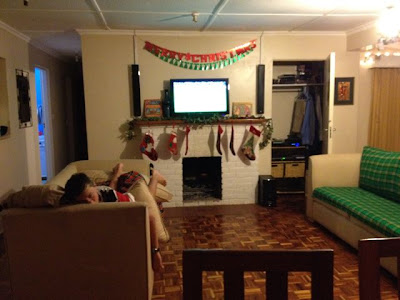 Jack graciously waited up for us and watched football on TV.

By 1 am we're both about to sleep, for a short while. I get paged to nursery, but the competent charge nurse tells me the xray I ordered earlier can wait for review in the morning. I want to hug her. We sleep. At 2:30 Scott gets called back for a couple of middle-of-the-night hours to care for the mother of twins whom he ends up admitting to ICU, and I spend from 5 to 7 am trying to keep the baby from Naivasha, and my two ICU patients, alive. 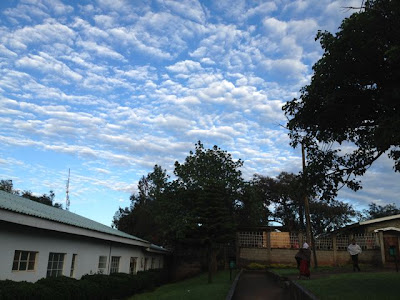 When I realize it is 7 am, I opt for a quick trip home to shower and have tea. And as I walk out of maternity, this is the sky I see. It's still raining most of every day, but glimpses of sun and sky are appearing.

And so Day 3 begins, back before 8, for the usual chapel, rounds, C-sections, admissions, babies, consults. I do appreciate the medical officer interns, it is NO PICNIC to take call without them. I remember being in med school and residency 20 years ago, when days like this one would be common and constant, and no excuse for not working full-out the day after. Only this time I have kids whom I miss, and whose feeding and care I have to still ensure through phone calls. Oh, and I'm a few years older I suppose. But thanks to the attitude prayers, I found a lot to enjoy in those intense 24 hours. Because the public medical system serves the poor, they are the ones who truly suffer from this strike. I'm just missing a little food and sleep, but not my life.

God bless you guys. It sounds tough and glorious. Will pray for strength and attitude.