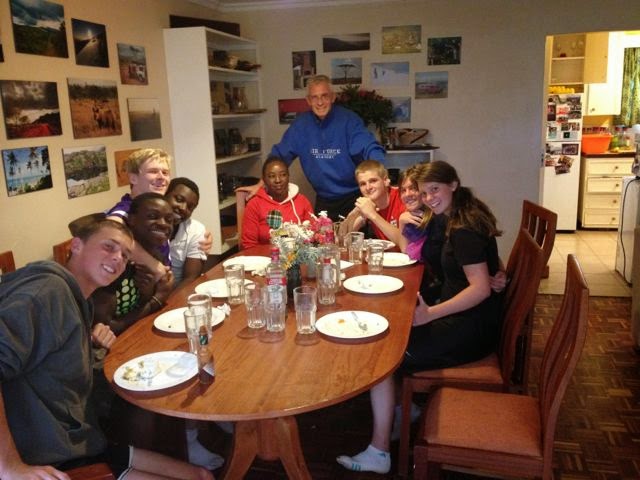 On Thursdays, our kids come home for lunch (the only day they do that) and bring an assortment of others.  Generally we started this to touch base weekly with the kids for whom we serve as guardians, back-up parent-help.  Sometimes we have a half dozen, and sometimes we have 15 or more. One of our traditions is to go around the table (and since we usually don't fit, around the room) and listen to each person share a High and a Low from the week.  It's a way to celebrate the victories and commiserate the losses, to build a little community as we talk about what strikes us from the last few days.  I am finding it harder and harder to get a lunch break and am often late.  Today I had Abigail prepare double, thinking that since it is an exam schedule with longer breaks, attendance might be extra high.  Wrong.  But still nice to see these kids one last Thursday, and share our week together.

So in the same vein, a few highs and lows of the week. 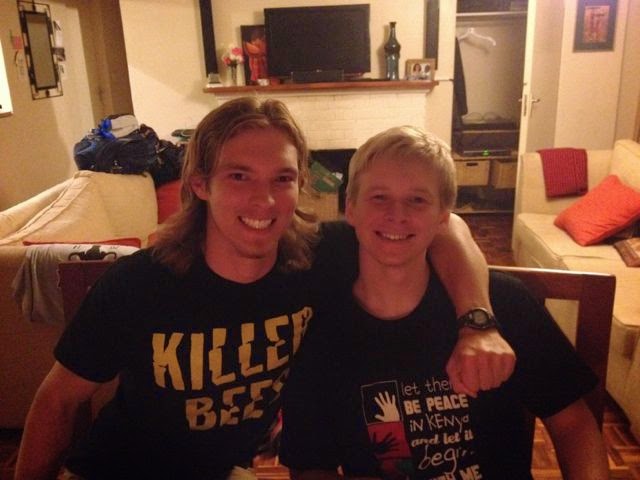 HIGH:  'Tis alumnae season.  A quiet knock on the door as we lingered around the dinner table last night at nearly 9 pm, and then big hugs.  LOW:  Caleb can't come back for alumnae weekend (the two-year-post-grad is the main event).  HIGH:  His friends are here, which makes me feel closer to him in some way.   Titus and Aneurin had just come off a bus from Uganda, hungry.  It was like old times.  Can't wait to see more of them.  Hoping to host as many as possible. 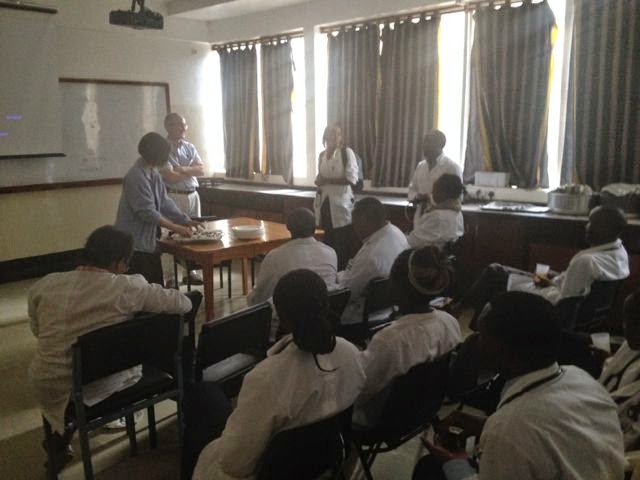 HIGH:  Meaningful goodbye parties for the Gessners yesterday.  LOW:  You have goodbye parties because people are leaving.  HIGH:  Many got a chance to verbally express appreciation.  We had a lunch for consultants, nurses, and permanent CO staff.  Then we had a cake for the interns at our weekly teaching conference. 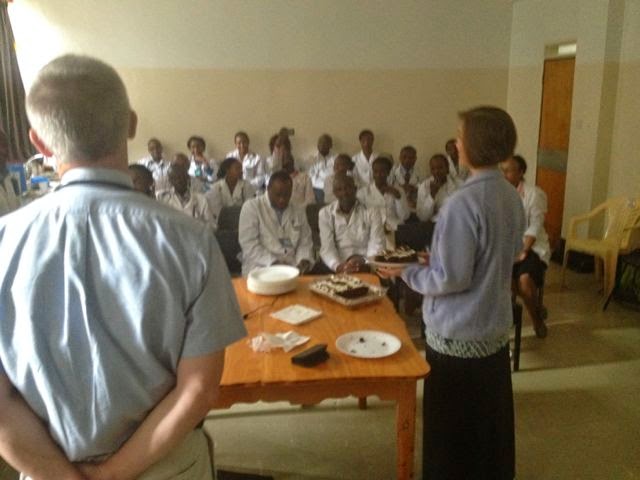 They will leave a huge hole in our department.
HIGH: As they leave, we welcomed Dr. Carola for five to six months, a German paediatrician who wants experience.  And for a month we have Dr. Donna and family from Georgia.  New Serge missionaries Dr. Roger and Ginny Barnette (he's an anesthesiologist) arrived for a short term stay in advance of their long-term commitment starting next year.  We've had each of these newcomers for meals this past week-plus.  Tonight we also welcomed former team mate Pamela and Serge colleague Joel here on a mission-planning trip.  'Tis the season of visitors.  It rained as we made pizza, which in Africa is a sure sign that visitors = blessing.  So I won't count the rain as a LOW. 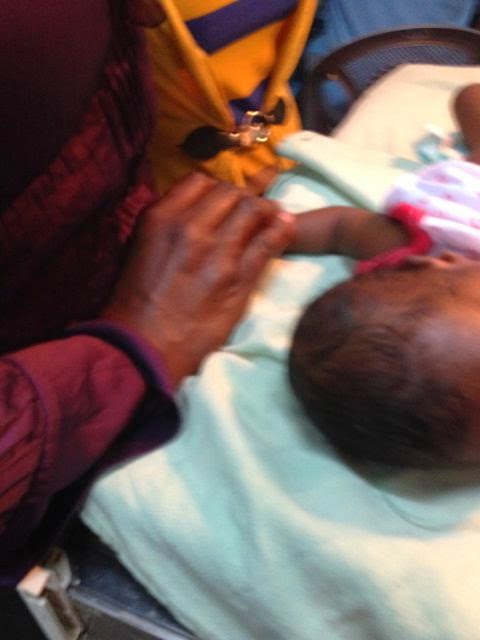 HIGH:  Because our department is working hard on excellent and compassionate care, we are busy.  Every day more patients come.  Often the sickest, the end-of the road, the desperate.  Some of them get much much better.  We've had some fascinating diagnostic dilemmas this week.  Rare syndromes.  Hypertension that turned out to be a blood clot extending from the aorta into the kidney's blood supply.  Severe malnutrition that turned out to be TB. A massive bone infection; an infected knee.  Seizures of all sorts.  A baby referred because poor growth pointed to a congenital heart defect, but who was actually infected with HIV.  A preemie discharged who returned with pallor and shock, resuscitated and OK now (this is her great-aunt praying as I bagged her little lungs full of oxygen . . she made it).

LOW:  Not enough resources of any sort.  Not enough beds.  Not enough energy or wisdom.  Not enough money.  Every day is a marathon of juggling and survival.  Who can I move from a critical-care area to a less intense one?  Who can I send home?  How can I manage this baby without admission?  Is this one getting treatment in the hours and hours of waiting for a bed to open up?  How can I respond to calls from various areas while still seeing patients on rounds?  What can I teach our trainees as we go through the day?  One day this week this came to a head when I'd been on call, was very tired, and very frustrated.  I talked to a half-dozen people to address some issues that endangered a patients' life, and I ended up hurting some feelings.  I got reprimanded.  It was a low day.  Praying for grace to infinitely extend my patience, my diplomacy, my wisdom, and even by some miracle my joy.

HIGH:  Money raised by Mardi for a patient with spina bifida, a sweet little boy PN.  He survived pneumonia, the ICU, and now he's going home.  In fact we've been spending money on lots of kids lately.  So, LOW, our Needy Children Fund account is in deficit.  But our chaplain tells us, the more we spend the more God will send.  Testing that these days. 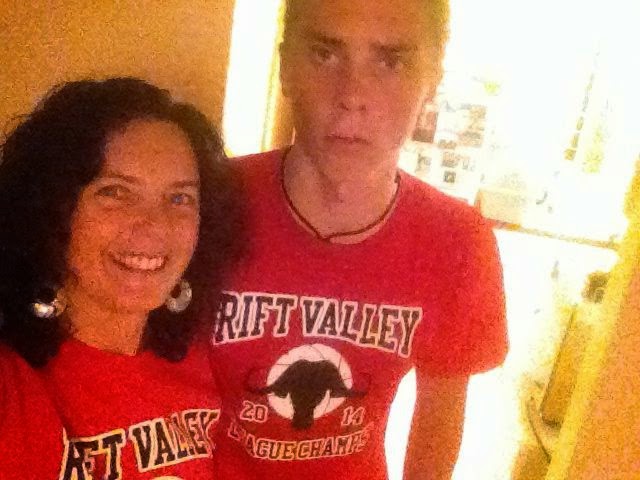 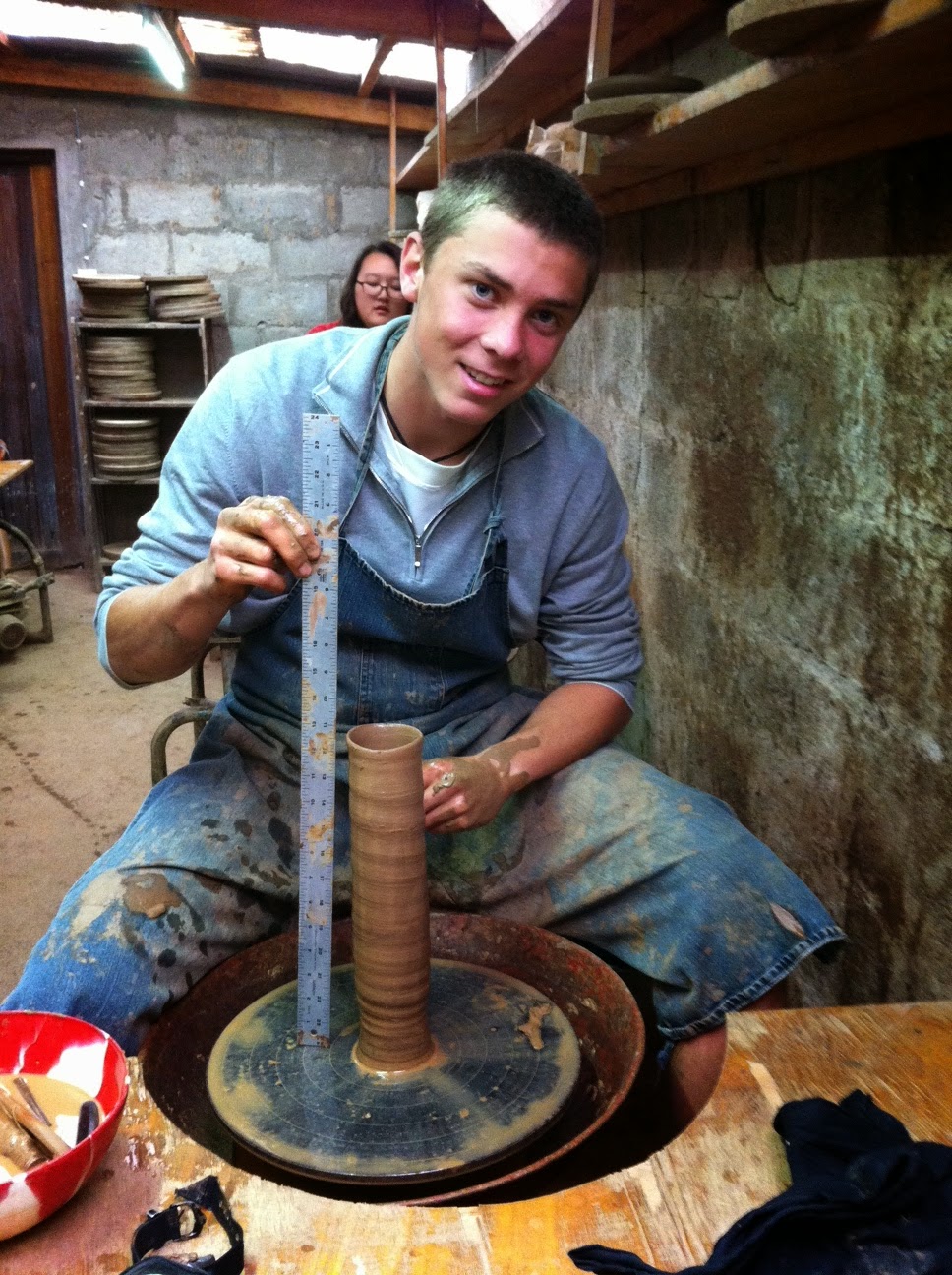 Literal HIGH:  the pottery class does a contest to see who can make the tallest thin vase "tower".  Jack did 12.75 inches, which evidently topped the instructor, and won him two mugs.  He has brought home lovely pieces from the pottery class.  It is the right combination of his manual dexterity and artistic bent.


LOW:  If you read the post below, it is clear that a huge portion of our week was spent in sympathy with our friends and team from Bundibugyo.  The story is on CNN and the Wall Street Journal, so anyone who wants can find out the details.  Here is President Museveni's explanation which is worth reading, and boils down to tribalism.  The four traditional Kingdoms that preceded British colonization were long suppressed, but after decades of peace allowed some ceremonial roles.  However, now many smaller groups that never had monarchies have seen the financial and political bonus of a "kingdom" and demanded that their leaders be recognized as kings. After the government allowed a Bakonjo kingdom (a fairly large language group in Western Uganda and Eastern Congo, but the minority in Bundibugyo) the Babwisi/Baamba also agitated for a king.  The groups have long had a simmering conflict (does anyone remember our baptism party fiasco?) but the establishment of the recognized kingdoms has escalated divisions.  Money, power, jealousy, fear all play a role.  Maybe even the oil discovered in the Albertine basin.  Maybe mistrust, lies, the sense that it is us or them, the drive to survive.  So one group theoretically riles up its youth and sends them on 13 coordinated attacks over three districts, armed with only pangas and spears, to steal guns from police barracks and army posts.  The army fights back with actual automatic weapons and slaughters these youth.  The newspaper reads, "In summary:  Mayhem."  Here is an alternative minority view, focusing more on the possibility of cross-border anti-government rebellion. It asks some good questions about who did that impressive coordination, and what the purpose of the whole event was.
HIGH:  It was quickly suppressed, and the army and police are patrolling in full force.  LOW:  It is another round of uncertainty and loss in a place that has known too much.  DOUBLE LOW:  Our whole team evacuated.  TRIPLE LOW: This happened at a time when a former team mate and son were trying to visit CSB, which had to close for safety concerns.  And when other visitors were there.  HIGH:  By Tuesday we were talking to friends in the district who felt much relief.  Schools had been told to open, buses and taxis were moving, shops were reopening.  HIGH AND LOW:  So we decided to allow Luke and his room mate to drive in on Weds/Thurs.  This was a big part of his epic trek, to visit his home, and greet his old friends.  It is not something one imagines saying as a parent, yes, you can go to a place where 90 people were killed three days ago.  But we are glad we listened to the people on the ground, and let him go.  He had such a wonderful time connecting with so many people and places.  The rest of the team is going to make decisions about returning next week.  Luke is now back in Fort and on the way east to Kampala and then Kenya.  LOW:  We grieve for the deaths, the divisions, the hard task of discerning what is best, the healing of tensions and fear.  And for the same in Kenya and South Sudan.

HIGH:  Scott got interviewed this morning, live, on BBC radio. LOW: He was asked about Ebola, because we once lived through an ebola epidemic.  Still it was sort of cool, and immediately followed by an email from a German TV station requesting an interview tomorrow.  My only fame moment today was as I was walking out of the hospital at 6 pm, a random dad asked me to pose for a photo with his very cute daughter dressed in pink.  I'm pretty sure she wasn't one of my patients, but I complied.  Maybe she'll be a doctor one day and look back on that photo  . . . We have some odd life moments.

HIGH:  Caleb got to fly on a C130 to a neighboring country, and is learning and observing a lot about life on an air force base in a foreign country and in a time of war.  Another HIGH, he's been able to practice some of his Arabic.  SUPER LOW:  lots of running is making his knee hurt, so he's not really healed, and we still long for that.  He's less mobile again now.  Sigh.  HIGH:  we have been able to talk over internet a couple times.  LOW: That's two kids adjacent to war zones.  Stressful.

HIGH:  Julia signed up for classes at Duke.  LOW: that means she's really going to leave and go to Duke.  One week 'til graduation.