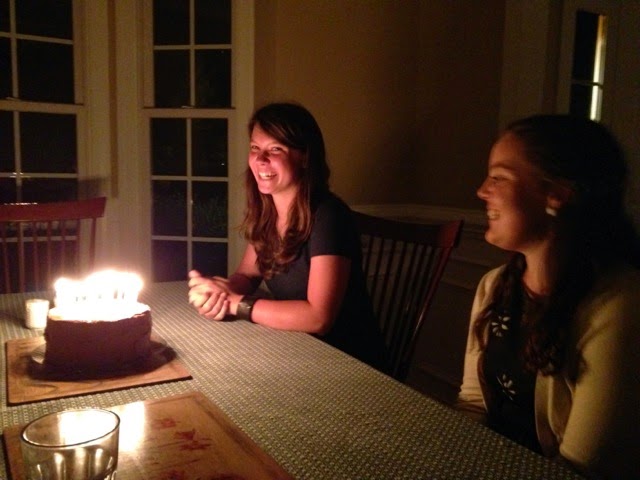 Julia's 18th Birthday, a moment for milestone thankfulness and wistfulness.  Mostly thankfulness, because she is a jewel:  precious, beautiful, shining, tough.  She has plunged into her first year of American school since preschool with courage and openness, making friends and enjoying classes and braving bike transport and the newness of just about every aspect of her life.  She is practical and prayerful and loyal and true.  We love her so much. 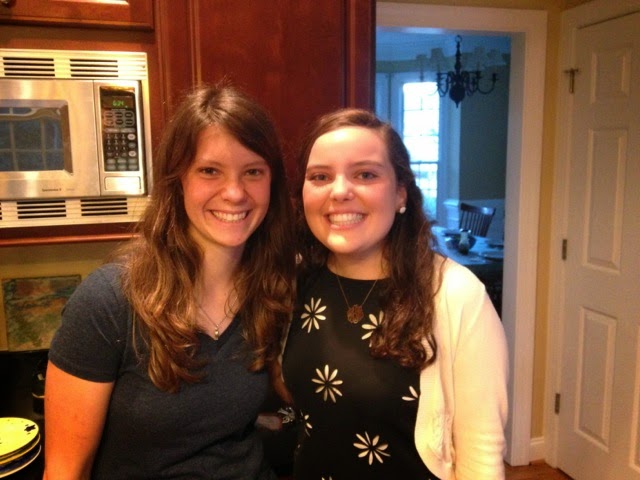 And thankful for our friends the Harteminks (and the Barts who connected us way back when) who invited her for a birthday dinner and cake.  And Grammy who could not come but treated cousin Emma and Julia to a dinner out together the night before in absentia.  And friends who hang out late at night in the dorm and celebrated her, and a thousand other things. 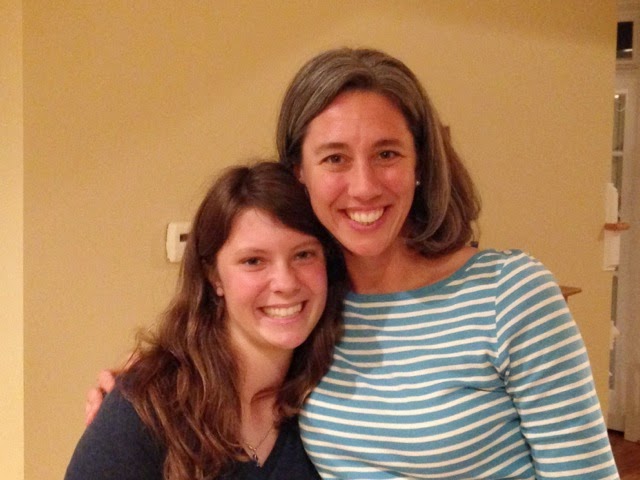 But we are also wistful, because we don't get to celebrate this milestone of transition to adulthood in person.  Because it is the beginning of the rest of life, when birthdays are spent mostly apart.  When we feel deeply the chasm of the continents, the time zone gap, the challenge of knowing our growing adult kids. 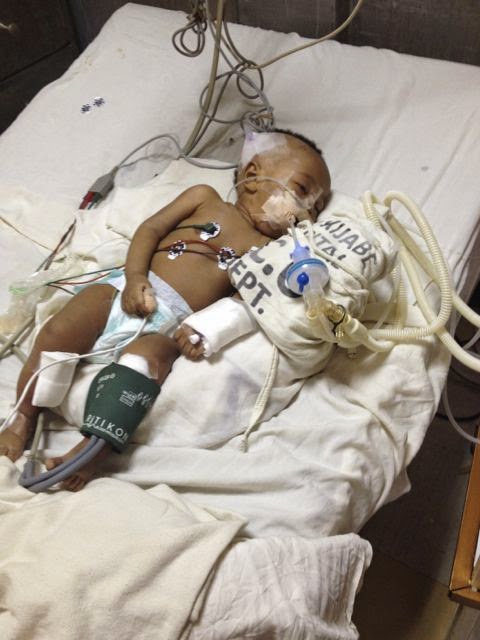 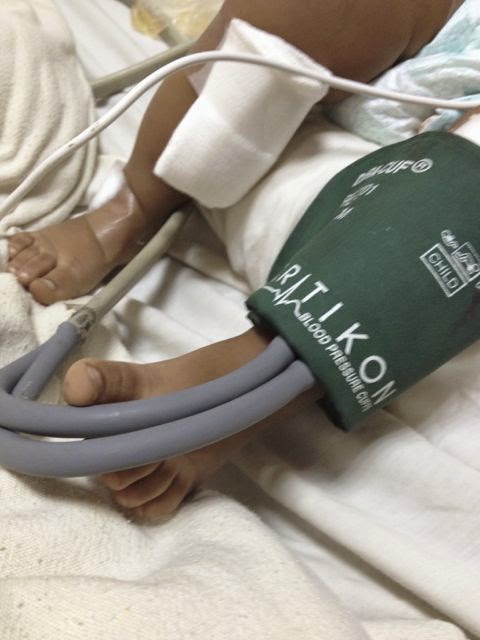 Yesterday, on her actual Birthday, as I went to early morning rounds, I felt acutely the responsibility of someone else's daughter.  Precious came to us last Monday morning, as I answered a page in the early morning to come quickly to the casualty (emergency).  Three months old, she'd had a viral-sounding cough and cold that progressed to severe gastroenteritis and then seizures.  She was convulsing and barely breathing.  Her initial pH in the blood was 6.7, which is very very bad, not many people come back from that.  With our casualty doc I intubated her and we started repleting fluids in her shocky, dehydrated body.  I was bagging breaths with one hand and holding my phone with the other making desperate calls to rearrange patients and space and call in extra nursing help to allow us to admit her to the ICU.  Now six days later she was still alive, moving a little, slightly improved, but still comatose on the ventilator.  That first morning as I rushed around casualty, I paused to explain things to her mother.  Who stood there at the end of the gurney, tears flowing.  I don't usually hug moms, but this one needed one.  I tried to be soberly realistic.  Her daughter was almost dead, and we weren't sure we could pull her back.  But also hopeful, that God brought her here in time, that we would do everything in our power.  And my own heart went into this struggle as we prayed together.  Love costs vulnerability.  I want Precious to live.  I don't claim to care as much for my patient, someone else's daughter, as my own.  But I do think the longing I felt Saturday morning to be with Julia helped me focus and pray and work for Precious.  Still hoping. 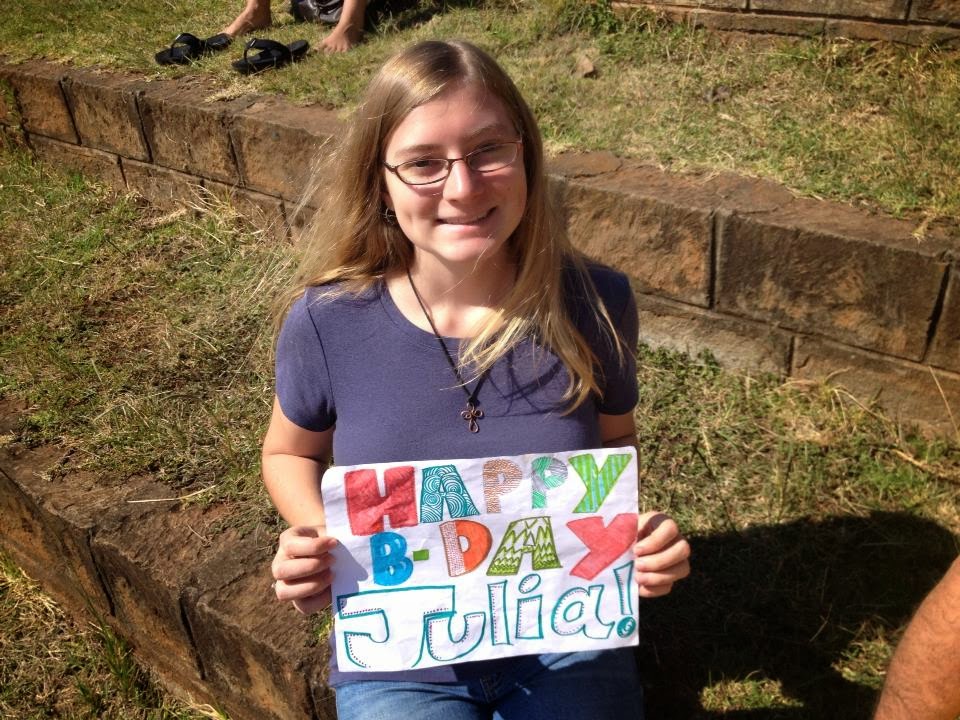 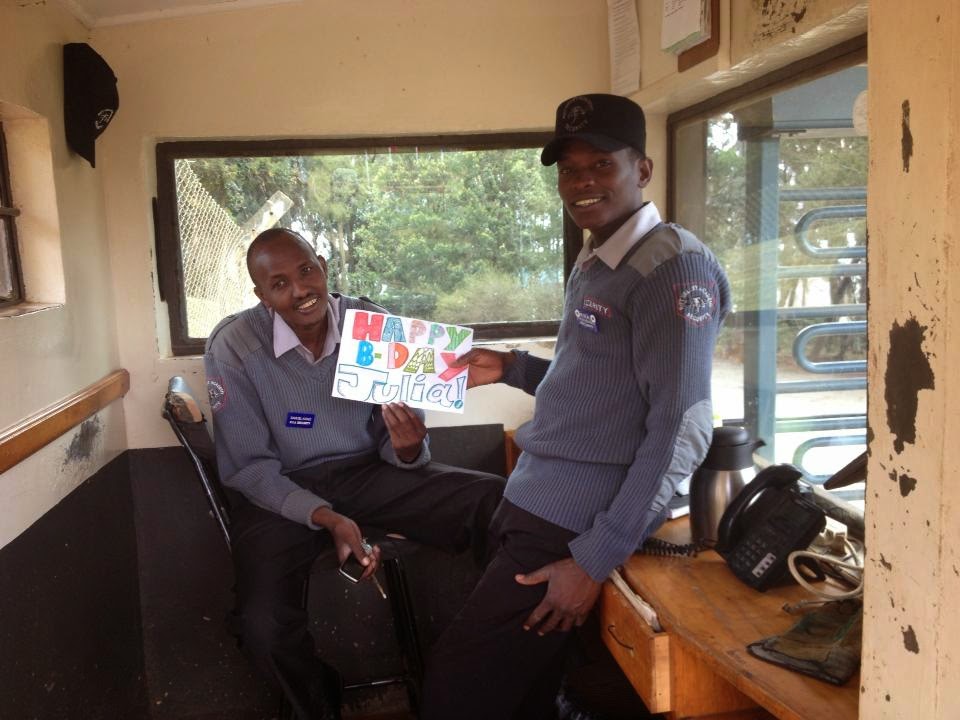 Then, up the hill to RVA, for the Sports Tournament/Senior Store Saturday.  And as I reached the top, I had the idea to take pictures of people wishing Julia happy birthday and post them to her on facebook. Liana Masso is way more artistic than I, and agreed to make a sign.  So as we watched games and stood in line for food and talked to friends, I snapped a dozen or more photos of people who knew Julia, greeting and smiling.  The edge of wistfulness was blunted by being in a place where people know Julia and care about her, where they can light up with the reminder that it is her birthday, and the opportunity to participate. 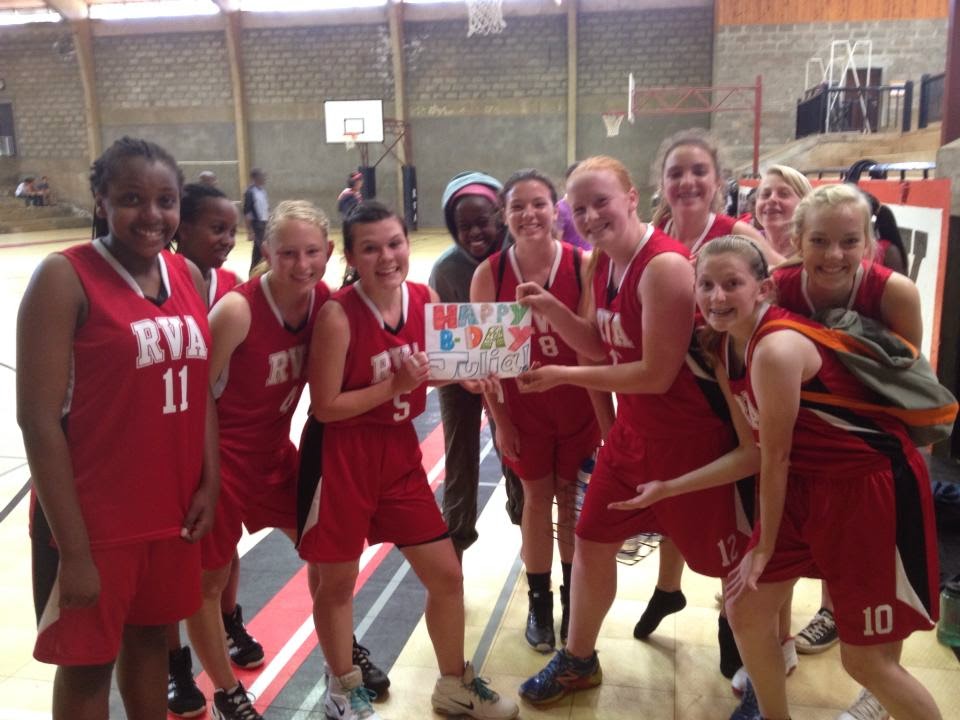 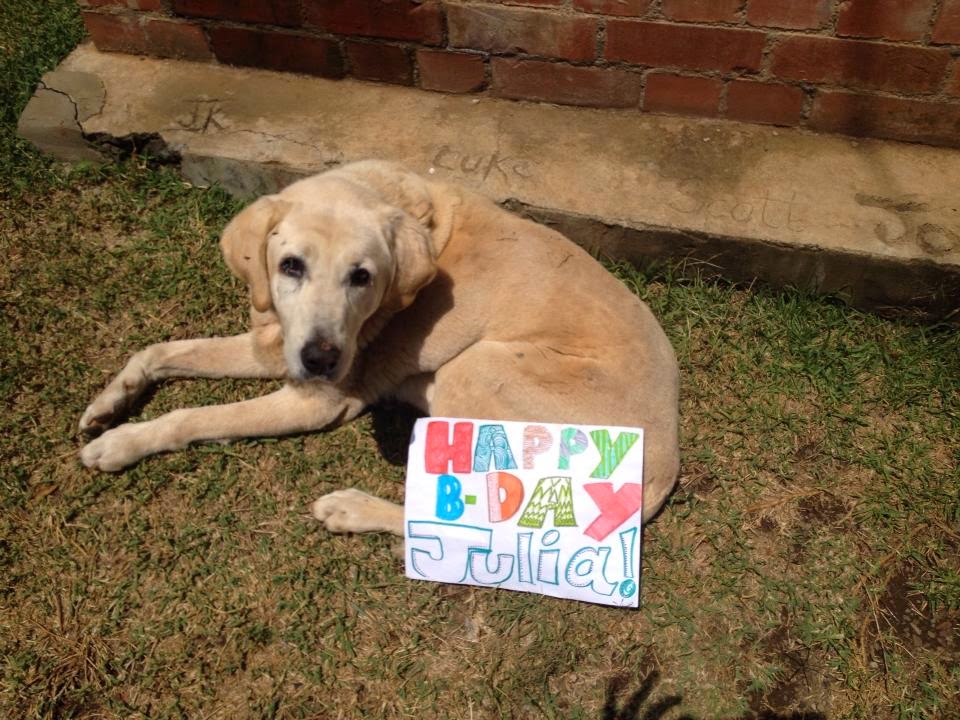 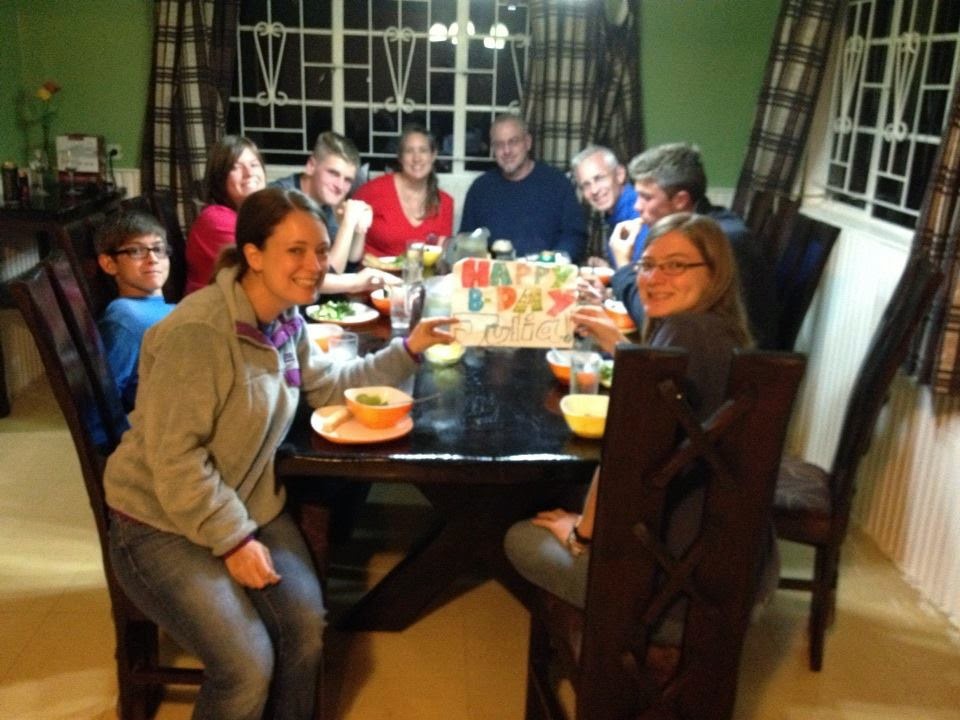 Our evening ended with dinner at our good friends' the Massos, because they are like family, and know it is hard to be away from a daughter on her birthday.  From experience.  When their daughter was with us.  Full circle now, they pulled us in for a cake and calling and passing the phone around the table to all say happy birthday to Julia. 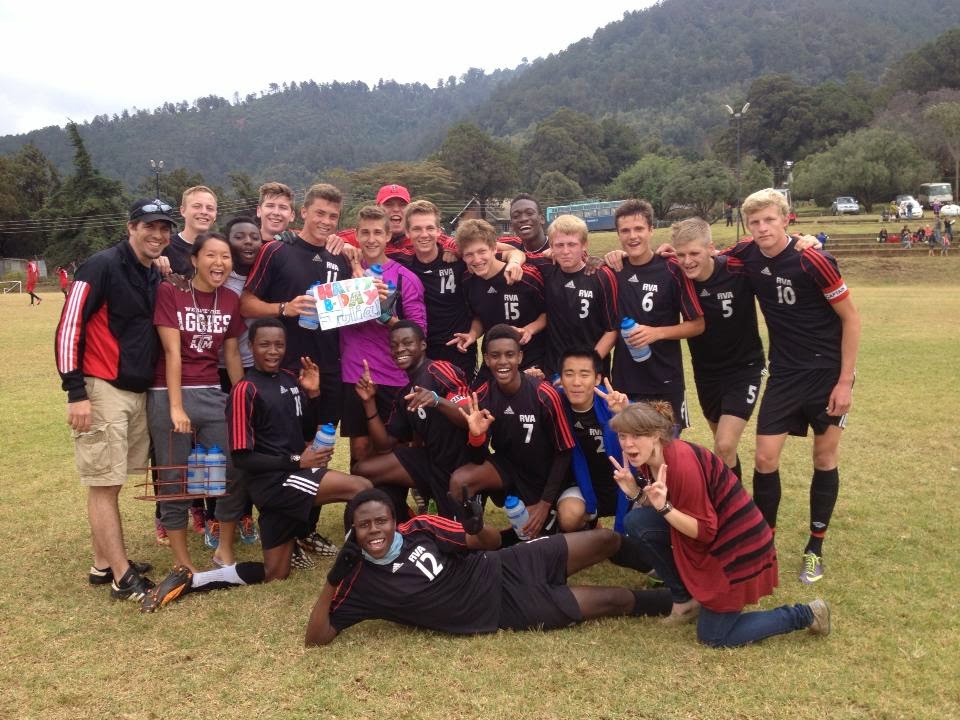 The boys won the tournament.  Jack scored a key goal in one of their closest games (he had promised Julia to score one for her!) and assisted the second goal that won that game, as well as the overtime golden goal that won the semifinals.  He played with skill and passion.  I love seeing him use his speed and strength to battle it out, and the way he passes into the center and gives his team mates the opportunity to score.

But today the wistfulness is edging out the thankfulness.  Partly from the realization that I don't know where we will be on future birthdays, but we are unlikely to be around as many people who know our kids as we are here.  Part of what binds us to Kijabe and RVA is that it was a home for them (though never for the six of us together), that when I walk around on October 4th I run into LOTS of people who know and love Julia.  And while we have a long way to go until our HMA (furlough), part of what will make it hard to leave will be leaving behind people who share in our love and parenting.

So it's Happy 18th to Julia, and THANKS to our friends especially the Massos and Harteminks, and PLEASE PRAY to those whose daughters are also PRECIOUS that this 3-month-old would wake up, and that we would take the vulnerability of love in stride, and keep walking this path.