Post-Liberia Quarantine - not quite jail 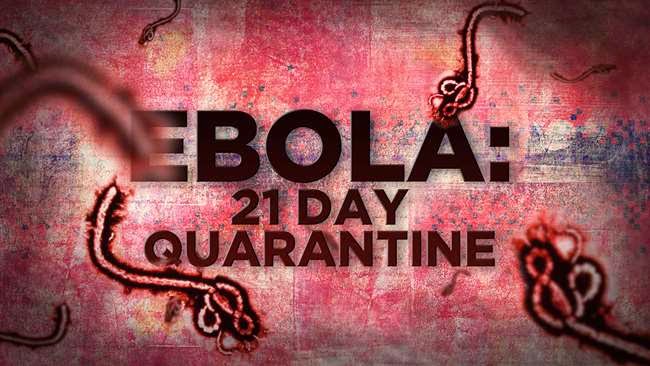 I did my homework and I planned to isolate myself in my parent’s home in California for 21 days following my service in Liberia.  I chose to come to the USA because Kenya wouldn't allow me to come back and because I know almost everybody treated for Ebola in the USA survives. However, I wasn’t expecting the level of intense scrutiny and enforcement from the Federal and State authorities which I’ve experienced.

When I arrived at San Francisco airport on Tuesday evening, the Immigration and Customs Officer nearly gasped when he read “Liberia” on the list of “Countries Visited” on the form which I had filled out.  He immediately picked up the phone calling his supervisor.  “Is Liberia one of those countries where they have Ebola?”  He then looked at me and said, “We need to take you to Secondary.”  We walked down a long hall while he insisted a half dozen times that “this is really routine”, “they just want to ask you a few questions”, “this won’t take long”, “you are going to be just fine.”  His level of anxiety was starting to stress me out.

I was ushered into a small room, given a mask to put on my face, and asked to wait.  A mask, really?  Ebola is not an air-borne disease - so I put the mask on the desk and waited.  After a half hour with no information, a Senior Immigration entered.  “You just came from Liberia?  And you didn’t pass through one of the five designated Ebola Screening airports (JFK, Dulles, Newark, O’Hare, or Atlanta)?  That’s not suppose to happen.”  It happened.  I had purchased my own air tickets - in separate purchases.  The first piece was the Brussels to Monrovia leg.  I had to get that in place before I could figure out the rest of the complicated travel.  My itinerary ended up looking like: Nairobi-London-Brussels-Monrovia-Brussels-London-SanFrancisco.  Kind of crazy - but it worked.  Despite not being a designated screening airport, the San Francisco Immigration Dept did manage to get the job done.  They had a prepared packet from the CDC for travelers returning from an Ebola-affected country.  It included a “symptom-checklist” and a digital thermometer.  We then went through the detailed symptom review with a CDC doctor from Atlanta by conference call, took my temperature, got every possible contact and address from me and after about an hour, I was released.  My was the lone bag left, sitting by the quiet conveyor belt from the London flight.

While in the car on the way home, I was contacted by the California State Department of Health who informed me they would be calling me in the morning to set up our Quarantine Process.  Finally reached Mom & Dad’s home late in the evening.  First time I have ever come home and not been able to hug my parents.  My dad gives the biggest hardest bear hugs to welcome me home - but not today.  During dinner I got another call from the CSDH because they wanted to give me a special number to call in case I developed a fever overnight.  “Don’t call 911.”  Those First Responders are not prepared to handle you.  Call this number and we will send a Special Team if you get symptoms of Ebola (read: Hot Zone Space Suit-clad Team).  You’ll be taken to the University of California at San Francisco which is the Regional Designated Ebola Treatment Facility.  OK.  (Gotta remember to take that malaria prevention medicine, I thought, because any fever is going to be a disaster).

The next morning I was called by a Public Health Nurse representing the California State Department of Health.  Yet another hour of questioning and explaining of the context of the situation where I worked in Liberia.  Then…4 hours later the doorbell rang and the Director of the San Mateo County Department of Public Health came to serve my “Quarantine Order”.  This was a legal document stipulating the very specific terms of my Quarantine Period.  No public contact of any sort.  I may not go anywhere where people gather.  No shopping, no restaurants, no church, no theaters.  No public transport of any kind: train, boat, plane, subway. I may leave the house only to go for solitary exercise.  And I must check in by Skype twice a day: 9am and 4pm.  During that time, the public health nurse will watch me take my temperature with the digital thermometer - and I will show her the reading on the Skype camera.  And report if I have any symptoms consistent with Ebola. Violation is punishable by stiff fines and/or  jail time.  Enforced by the Sheriff of the County. 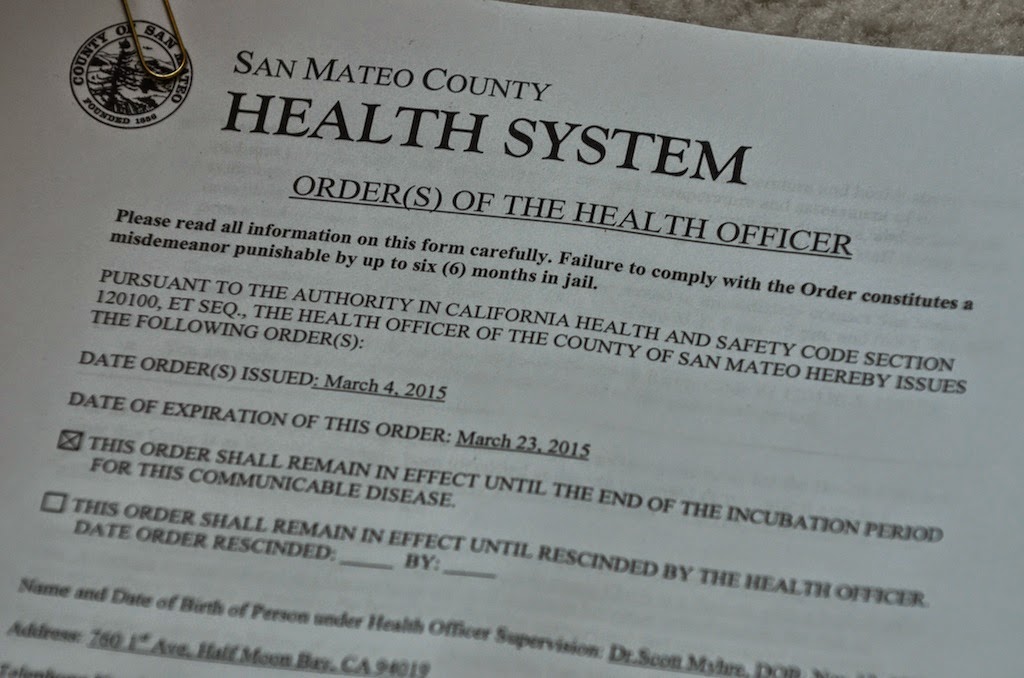 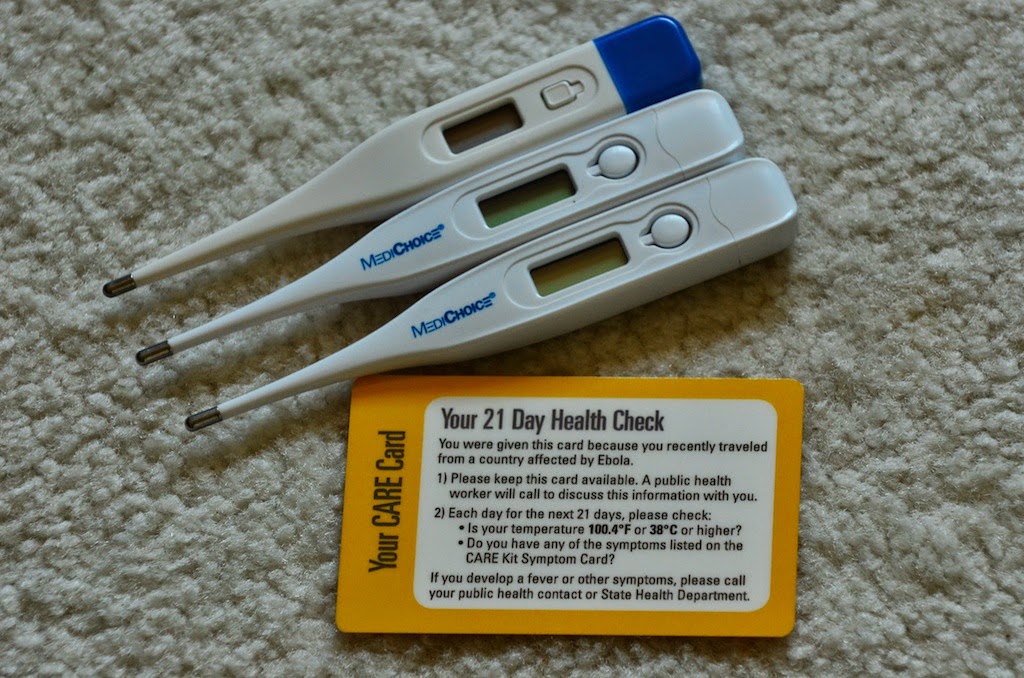 The Director (a doctor), told me that there are currently about 1400 “travelers who have recently returned from the Ebola-affected region” who are currently being monitored and in quarantine in the United States.  Of that group about 95% fall into a “Low Risk” category meaning that they were not involved in any patient care.  I’m in the “Some Risk” Category (the other 5%)  which includes those that worked in an Ebola Treatment Unit or provided general medical care in a non-Ebola setting.  The “High Risk” Category is for those who have had a known body-fluid exposure from an Ebola-infected patient.  The “Low-Risk” group reports their temperatures but doesn’t do it in the Directly-Observed-by-Skype method which the “Some Risk” does.  Many of the “High Risk” workers seem to be admitted to a hospital for testing and observation.

So, this little vignette certainly serves to illustrate that the CDC has their game on. They are super-organized and super-serious.   I didn’t really expect this level of intensity in my post-Liberia monitoring.  Is it onerous? Not really.  Every person has treated me with kindness and respect.  The San Mateo County Public Health staff have expressed their appreciation to me personally for my sacrifice and service.  Of course, it might feel a bit more oppressive were I not staying with my parents who live two blocks from the Pacific Ocean and pamper me as if I was their only son.  Three weeks of jail = three weeks of rest.  And I got three free digital thermometers courtesy of the CDC. 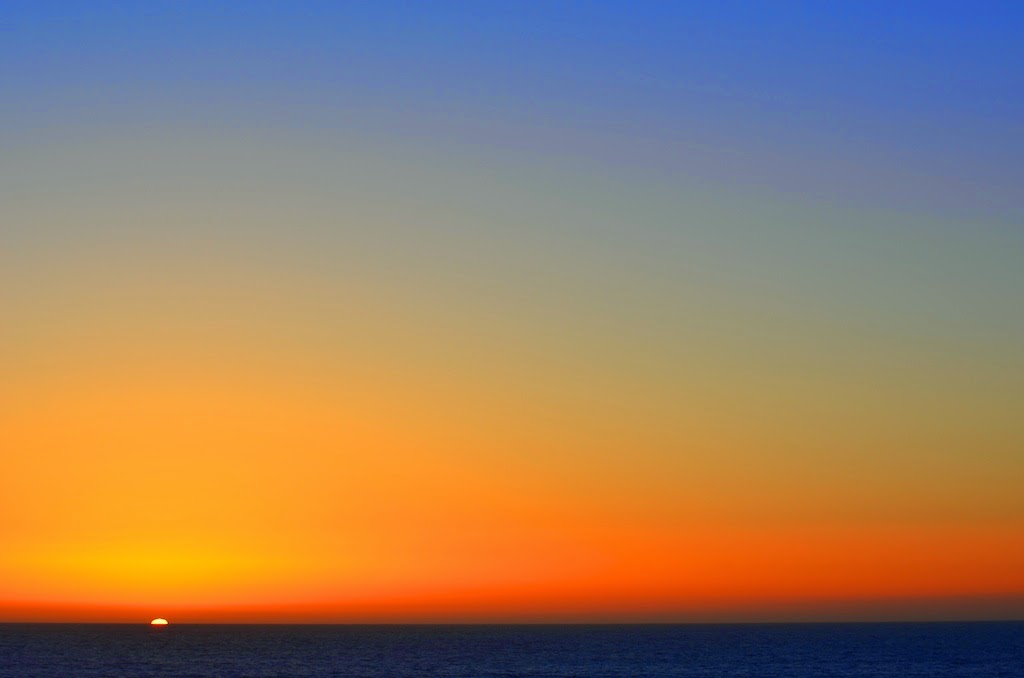 must be nice being the only son

Glad you are almost Home

God's way of giving you much deserved rest and downtime!!

Praying for your rest, recovery, and re-connecting with loved ones!

Hi Scott, Sorry I can't come down personally to say hello and thank you for your service. But I am thinking about you and about Dave and Ruth with appreciation. Hope that you will enjoy 95% of your visit here, and that the 5% spent with the CDC people will pass quickly. With warmest regards, Judy in HMB

I started reading your blog in 2007 when Ebola found your village in Uganda. I have continued to read about and pray for your family. I've been serving in Liberia since 2007, and was happy to learn that you would be making a visit! (I've been in the States since mid-April because of Ebola) THANK YOU for loving, serving and sacrificing for the people of Liberia! Yes, Liberia needed frontline Ebola fighters, but she needed good doctors to prevent unnecessary deaths even more! Cooper Beach (just around the bend from that top picture) is my home. I've sat on that OB-3 bed, thanking God when my namesake was born! Thank you for leaving family and comfort to go to Liberia--a scary, unknown situation-- to serve. Enjoy your 3 weeks of "mandatory" rest and may the reunion with your family and friends in Uganda be sweet-o! Many blessings...and I'll still be reading and praying!

Thank you for your service and for your heart for the people of Africa. May you stay symptom-free!