Malaria
Jack was feeling a bit exhausted this week, which we thought was understandable as a senior slogging through AP's and rugby practice.  Thursday morning he had a headache and was quite tired, but we just kept the ibuprofen and coffee flowing until he could make it through the final exam for his online advanced calculus class (which is on an American school calendar, and ending, unlike RVA which continues through mid-July).  That afternoon he actually LEFT RUGBY practice early, which is unheard of, and Scott had the sense to pull out one of the rapid malaria tests we had left over from our Regional Retreat.  Sure enough, he was positive for plasmodium falciparum, which is quite serious but treatable.  He had taken a month of prophylaxis during and after his time at the coast, but it seems it merely suppressed and did not clear the parasites.  One injection and 5 doses of coartem later, the vomiting and high fevers and chills have receded and he is up on his feet again.  Today is the major RVA social/sport event of the year, the Blackrock Rugby Tournament.  Thanks to all who prayed for him. He's not 100% but he can at least go!  This is huge.

Rebels
Friday our team from Mundri, who have all been evacuated for nearly two months, began getting distressed messages from South Sudanese friends still in town.  The situation is still unclear, but it seems that rebels loyal to Riek Machar moved into the area and battled national military loyal to the President Salva Kiir, and the rebels now took control of town.  The families of the Bishop and Principal we mentioned in our last post have fled deeper into the bush to escape gunfire.  Please pray for them, and all the peaceable Moru people who are caught in the crossfire of political power-grabbing.  There is one American NGO worker, a woman named Amanda, who is friends with our team and was also caught in the mess.  Pray she can get out to her own safety networks.

Awards
Meanwhile at Kijabe, the centennial celebrations continue.  At Thursday morning's chapel, five current hospital workers were given Centennial awards:  a driver for compassion, a laundry worker for faithfulness, a nurse-in-charge for leadership, an plumber for longstanding ingenuity and service . . . and me for "excellence", which is mostly about our Paeds department and how it has been built up by all of the great paediatricians here over the last five years.  I was floored and bumbling in my thanks since I had gone hoping to see Scott get recognized for compassion post-ebola-service, not me.  Anyway it was kind of the staff to vote for a nod to our department and to missionary input (the rest of the awards went to Kenyans). 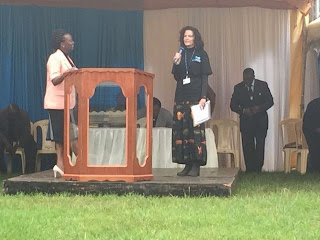 Presidential visit
Friday's celebrations were devoted to the dedication of the new Bethany Kids Children's Center, a 70-bed wing of the hospital for kids, which is about 80% completed but not yet ready to use. President Uhuru Kenyatta landed in a helicopter, and our hospital rolled out the red carpet (literally).  He took a tour, and as he passed through the new children's center a dozen or so doctors and nurses stood behind the new nursing station in a line of greeting and respect.  He stopped and shook a few hands, including me, so I have now said "good morning" and exchanged "how are you"'s with the President.  The tour was followed by a traditional couple-of-hours of speeches, songs, and presentations.  Our CEO boldly asked for assistance since we care for so many patients from all over the region.  President Kenyatta's speech was articulate, kind, insightful.  He went out of his way to honor those who serve, and to treat people with cheer and respect.  It was an impressive day.  The former missionaries who returned all received nice award trophies from him, including our friends the H's who are staying with us.  In all a real capstone day for the hospital, for Mardi and David Shirk's hard work too.  Thankful it all went off well. 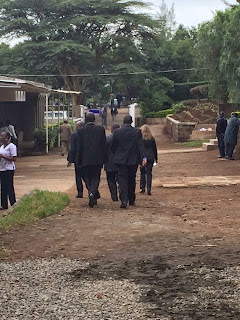 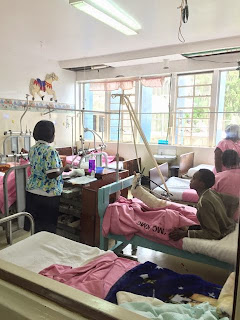 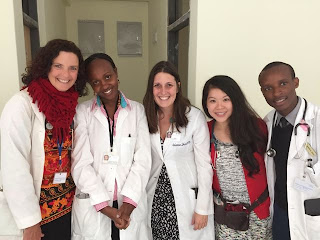 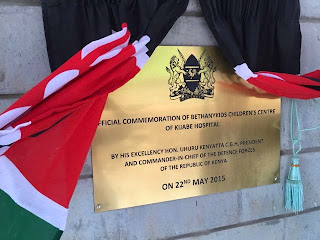 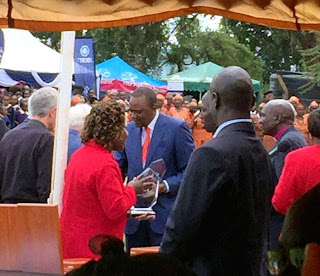 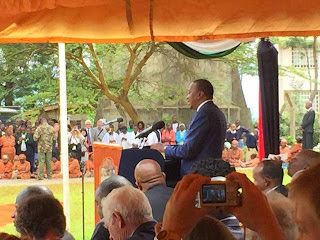 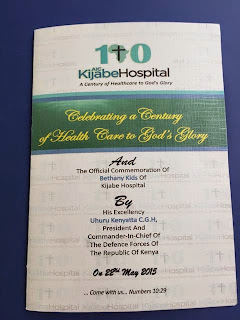 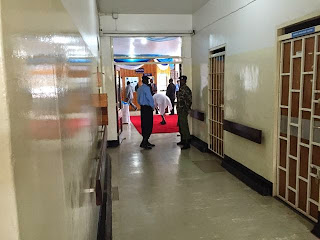 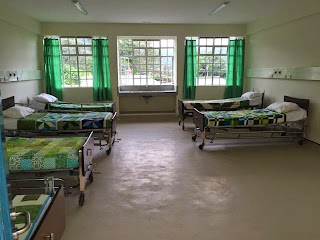 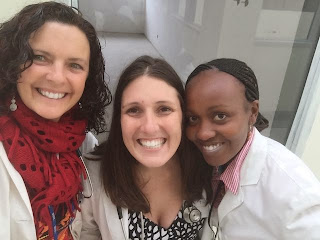