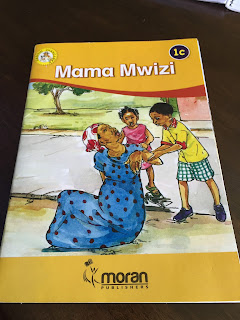 This week we progressed through some Bible stories, medical role plays, and the children’s school-book “Mama Mwizi.”  The title is a dead give-away that this isn’t a sanitised American politically-correct story where our minds are broadened to accept any lifestyle choice as legitimate, and where everyone ends up friends.  If you aren’t up on your Swahili, the translation is basically “Mrs. Thief.”  Two children are left home alone on a Saturday while their parents travel to a party (which in Kenya would be an all-day affair).  Their father gives them strict instructions to not open the door to anyone they don’t know.  But they venture out to spend a dime on candy, and on the way back fall victims to a well-planned scam.  A car slams to a halt and an apparently pregnant woman is shoved out the door.  She lies helpless, crying as the car speeds away.  The gullible/tenderhearted children help her to her feet and as she wails of injury, they escort her to their rural home.  One runs to find the taxi-driver in the village to take her to the hospital, and the other runs to find a local nurse for advice.  Meanwhile the woman calls on her accomplices to come to the house with a lorry, and they systematically empty the contents of the home, from the radio to the clothes to the furniture and appliances.  The shocked parents return to a ransacked, empty house, followed soon after by the kids, the nurse, and the taxi driver.  Luckily the thieves have been stopped by the police not far away for a “random” shake-down, and when they can’t show the police any receipts for the items in their truck they are apprehended.  The story ends with the goods returned, and children sobbing in front of an angry father, who lectures them for disobedience and then cancels his promise to take them to the game park in the future. 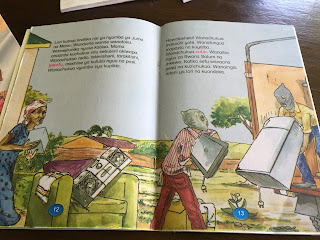 Perhaps this sounds harsh for a 1st or 2nd grade picture book.

But the plot reminded me of many fairy tales, where disobedient children run into potentially fatal consequences.  In the old days, and in modern Kenya, the point of these stories was not to calm or delight or broaden the young minds who read them.  They were/are cautionary tales in a world filled with danger.  A child could not be assumed to avoid some of the world’s harsher realities, like lying thieving con artists, or child traffickers, or HIV.  So obeying some rules could be life or death.  Bad things, really bad things, happen.  Kindness is not always rewarded.

Our generation tends to trivialize evil, to deny any such category, or to glorify it, or to spew it forth with such repetition we become numb.  Our story lines become cartoonish, with self-absorbed angsts and occasional unavoidable random misfortunes.  Or become prurient. But we need fairy tales, where creepy goblins lurk and where witches cast spells and where choices must be made.  And where all of the evil has not been explained or tempered into a bland universe of shades of grey.

Truly terrifying evil on the order of a Biblical universe with hellish beings has some merit, though it is most often relegated to the fringes of horror movies and paranormal books.  I think David Mitchell and Cormac McCarthy write evil properly.  Small doses are all I can take, for sure, sort of like immunisations, to help us make sense of the Cross.  True confession--besides Mama Mwizi, this is on my mind because a friend who shall remain unnamed got us watching Stranger Things.  We're a few episodes in, and I can't vouch for the whole series, but it is truly terrifying in the Fairy-tale genre of other-wordly evil creeping into a small-town late-70's looking place that reminds me of my childhood.  This thoughtful essay about another movie I haven't seen grapples with the same phenomenon, finding truth in fictional horrors, and the way such stories help us live in South Sudan (the author of the essay just evacuated from there to our former church in Baltimore) or treat malnutrition or counsel the sorrowful.  It's a reason I liked the Hunger Games series as well:  adolescents conscripted to fight on behalf of corrupt all-powerful regimes sounds awfully close to real life.

So if you're an 8 year old in Kenya, you better know about thieves and scams and the importance of locking your door.  And if you're a middle-aged doctor in Africa, you might need some TV series and novels that take evil seriously.  And if you're thinking of giving the next book in the Rwendigo Tales series to someone you love, be warned that rebels and abduction and human trafficking make an appearance.  Evil is part of all these stories, but not the end of any of them.

I agree -- I'm reading a Cormac McCarthy book now. Enjoying it for it's differences from what I usually read -- and the way it's set out -- but I'm ready for it to be done. Too much evil!!

You have to hurry back quickly, because I am not watching that show by myself! Sincerely, "a friend who shall remain unnamed"