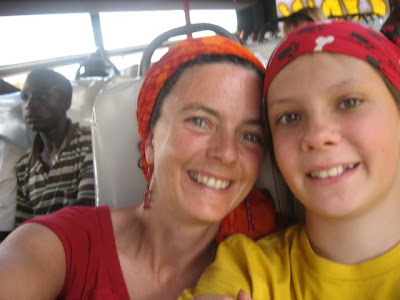 . . . began with a bus ride. Which should not be so adventurous, except for the fact that public transportation is the most death- defying activity for an otherwise healthy foreigner in Africa. I had long clung to the safety of traveling in our own truck, with our own defensive driving, and I admit that in over 15 years of living here I had never braved the bus before (I know that makes me a wimp of a missionary . . . ). Our family had arrived in Kampala from Kenya a week ago on a Friday evening, and we knew that if Julia was to participate with her Christ School team mates in the Girls' National Football Tournament in Fort Portal, she and I would have to take the bus Saturday, parting ways with the guys who needed to stay and buy medicine and food and do all the usual Kampala errands. So we packed as little as possible in bags we could easily carry, and Scott dropped us off at a congested intersection in the heart of the city. I pretended to know where I was going to discourage the inevitable hustling offers of dubious guidance, which involved several confident but wrong paths shouldering through throngs of people in the market mazes before finding our way to a fenced lot full of buses. We paid our fees (about 6 dollars each) and were jostled onto the already full bus. The conductor wedged us into the back bench seat, with people blocking the window and the aisle, our bags on our laps and under our feet. I protested that Julia would surely throw up, but he cheerfully said, no problem, we'll hand her a caveela (plastic bag) to vomit in. Friendly passengers greeted us with "Obama, Obama", but after a few minutes I started to feel claustrophobia and mounting panic. I think it was probably a bit of an obnoxious thing to do, but I felt like I had to make and effort for my daughter. I offered two women nearer the door and a window a few dollars to change seats. They jumped at the chance, and we were all happy, them with pocket money and us with our own two-person bench and an open window!

First we filled up with 384 litres of fuel, which I calculated cost within ten dollars of the full amount one could collect from the 60 seats, so either the profit margin is very very small (basically the passengers over capacity), or that fuel must include the return trip. No wonder so little is spent on vehicle maintenance. No one budged from their hard-earned seat, but it would have been possible to buy anything from bottled water to socks, dictionaries, school books, gum, or a suit jacket from vendors who wiggled up and down the aisle. Finally we were off, peering over walls and into compounds and shops from the high vantage of the bus window, twisting and turning and bumping over the rough back ways of the city. Within a few minutes a small boy three rows behind us had thrown up all over himself and the floor, the stench of which made us even more thankful for the open window bringing air. Once we left the city limits we gathered speed, so there was a good breeze as the papyrus swamps and small villages flew by. A small TV mounted at the front played Ugandan music videos, with cheerful reggae rhythms and girls in scandalously skimpy clothes, a sharp contrast to the respectfully dressed passengers clutching their bags and holding on for dear life, or kids in their best suits heading to visit grandparents in the ancestral villages. At the half- way point we stopped for the swarm of fast-food street vendors to shove their meat kabobs, roasted cassava, or chapatis through the high windows. After that the bus stopped more frequently (which slowed our progress but in my opinion also improved our safety) until the aisles were also too full to accommodate any more people, chickens, boxes, or other items. A young woman with a baby struggled to balance beside us, but when I tried to hold the baby for her he began to cry, so she instead sat on the arm rest, practically in my lap.

And so we reached Fort Portal, amidst banners announcing the National Football Tournament. Our adventure had barely begun, and I was glimpsing some of the purpose of God in our lives: to dismantle a bit of the carefully constructed safety net we had accumulated, which after many years had become a barrier between us and Uganda.

thanks for the vivid descriptions of life that i am missing and have been longing to hear from from the Myhre blog! And A huge congratulations for the tremendous team effort of CSB Girls Football team!! Way to go ASHLEY, even though she wasnt there it sounds as though the girls did her proud! much love pat

Thanks for your honesty and transparency. Not often seen and much appreciated.