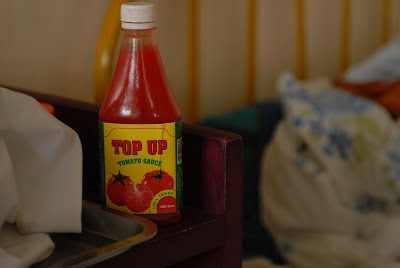 Bundibugyo has what may be the highest prevalence of Sickle Cell Anemia in the world. And the kids who don't carry a sickle cell gene are universally exposed to malaria (which destroys red blood cells and suppresses their production), universally eat iron deficient diets (low in meat and animal products), and universally are infested with intestinal parasites (which suck microscopic amounts of blood constantly). The result is that almost all kids walk around with a level of anemia that would cause a panic in any American emergency room, and the ones who are sick enough to be admitted to our ward would probably be in a high-level intensive care unit in a place with the resources. So in a typical day on a 25-bed ward, we probably are doing anywhere from 3 to 6 blood transfusions. Topping them up, so to speak, getting that hemoglobin up over a whopping 5 gm/dl, enough to keep the heart pumping and brain awake.

I've noticed recently, though, that there is an alternative top-up going on. By my patients' beds I've started seeing bottles of Top Up ketchup. This is NOT HEINZ, shall we say. I'm not sure any real tomatoes are involved. It is a gelatinous goo, a cancer-causing red color, and sweet. But to the very concrete-reasoning patient population, what looks like blood should be good for making blood, so I see moms spooning it into their kids. As if they needed another reason to vomit . . 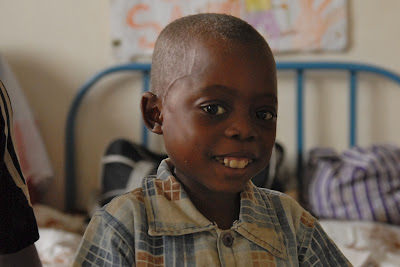 One of our favorite patients, Aligonilla, has been topped up three times in the last three days, and yet today is still at only a hemoglobin of 4.4. He was barely alive at 3, but once he's over 4 he sits and colors, smiles, talks, plays. This is the child I alluded to in the gap in blood supply this weekend, when he looked like he could have died, and if he had done so he would have been the 6th or 7th child of his father to die, and the 2nd one in three weeks. We've been struggling for his life since he was born, he's been admitted numerous times, he can't possibly live a normal lifespan, but for now he's topped up and back from the brink of death, so we're all relieved.

And all in a day's work: diagnosed a new 4 year old child with AIDS today, her mother is an articulate lady who actually has a job and connections but out of fear had refused testing in pregnancy, but when we saw the girl, moderately malnourished with a chronic draining ear and huge patches of fungal infection on her skin, we sent her for her test, which was positive. That was balanced by another 4 year old whose mother had died . . the Grandmother was sure the child had AIDS too, and an initial test had been positive, but the confirmatory tests were all negative, so we just told her to go home and live a normal life and thank God. Then there was a lady 7 months pregnant with twins who walked 8 hours from across the border in Congo for an ultrasound with Scott: he was packing up to leave mid-day when she arrived, but once he heard the whole story he regretted feeling frustrated with her lateness! So many stories, these are only a few, that we feel over-the-top.

Need a bottle of Top-Up, perhaps, for energy and faith!

Wow..that is amazing. I pray that the Lord gives you strength. So much in one day, so many lives at stake. I am thankful for you.

This is heart wrenching. I love the the young man smile though. Thanks for the work, I pray that God renews your strength.