Pyramids to Parthenon, a rapid tour of ancient civilization 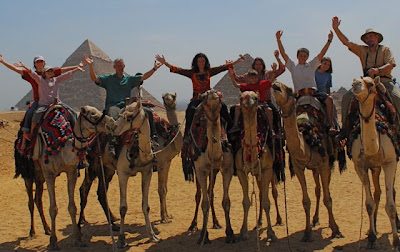 In one glorious day in Cairo, thanks to our knowledgeable young tour guide Mohammed and trusty driver and excellent planning by Karen, we sauntered around the pyramids, climbed down into a burial vault almost 5 thousand years old, walked through the temple where kings were mummified, viewed the Sphinx, rode camels, viewed a demonstration of how papyrus reeds are turned into parchment scrolls, spent a few hours guided through the treasures of the Egyptian Museum, munched fresh pita at a sidewalk cafe, saw from the outside one of the holiest sites in Islam, elbowed our way through the narrow streets of a bazaar with its persistent and aggressive merchants, and watched evening gather on the Nile as we cruised aboard a dinner boat. Wow. 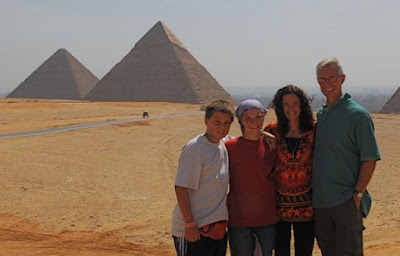 So a few highlights. The Pyramids, with their geometric simplicity and gigantic scale majesty, a moderate crumble when viewed up close. Withstanding almost 5 thousand years of desert wind and marauding forces, silent and impressive even today. 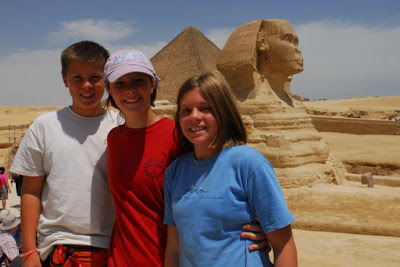 Camels, fly-swarmed, an appearance of tame docility but feisty none- the-less, gangly-legged and large-toothed. Woven rug saddles, a steep and ungainly ascent. Very touristy. But fun. 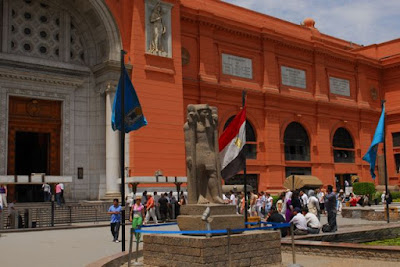 The museum was our favorite. Mohammed, a 23 year old, had recently finished a degree in Egyptian History. He would pause before a statue and then explain the symbolism of the hand positions, or remark on how a female pharaoh had herself depicted with a false beard and muscular arms to inspire confidence, or how the features of a famous slave showed he was a dwarf. The place is packed with items that were being carved while Abraham loped through Mesopotamia. Of course the burial treasure of Tutankhamun is the most spectacular and famous, with the jeweled golden mask and the series of sarcophagai and ark-of-the- covenant like boxes each one larger to enclose the one before. But we most enjoyed the story and display of his father, Ankhenaten, whose images display a remarkable African flavor and who introduced the concept of a "King of the Gods", a One Highest Deity, a sort of early monotheism. For this the priests of the pantheon of lesser gods maliciously removed his name from his casket after his death. One can either assume that Hebrew images of cherubim and seraphim have been influenced by the Egyptian winged gods . . . or that both reflect an interpretation of some beings that are spiritual and real. It is awe inspiring to stroll through room after room of stones and tablets and statues that have been around for thousands of years, no protective glass or alarms, just right there in front of you. 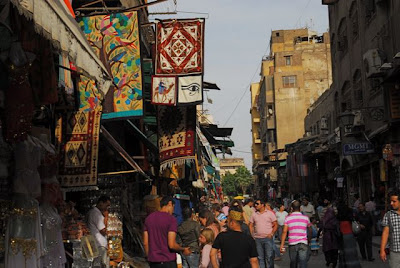 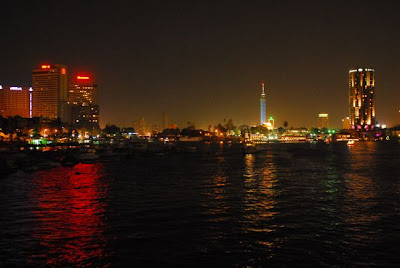 And lastly, the Nile at night, lights of Cairo in huge waterfront skyscraper hotels, a cool breeze on the water, the slow chug of the boat, chairs pulled up to the deck rail, the same water that melts from the Rwenzoris in view of our home and feeds Lake Victoria then winds up through Uganda and Sudan, here again with us in Cairo before flowing into the Mediterranean Sea.

What beautiful pictures. I am glad that you have a time of respite! Praise the Lord. The pictures of you on the camels, I have that same one when I was a child with my parents. When I frist saw it, I took a second look...funny.

Your labor is hard, but God is blessing it. Thank you for all the updates and pictures.