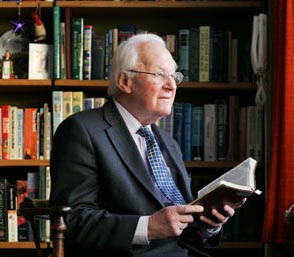 John Stott, a giant of the Christian faith, died this week at age 90.

Time magazine called him one of the 100 Most Influential People in 2005.

I had the opportunity to speak with him over tea in the mid-90s when he was the keynote speaker at the Christian Medical Society Conference which Jennifer and I attended here in Nairobi.

At the time I was a distraught young missionary, troubled by the untold suffering of the poorest of the poor in Bundibugyo. I came to Stott with my struggles in seeing countless children dying of preventable disease, of women beaten senseless repeatedly by their drunk husbands, of relentless encounters with hunger, pain, and loss. Dr. Stott listened patiently, offered some words of consolation and pointed me to one of his most notable books, The Cross of Christ. He directed me to a specific chapter in which he addresses the issue of pain and suffering in our world. It is there that I found his words:

I could never myself believe in God if it were not for the cross. The only God I believe in is the One Nietzsche ridiculed as ‘God on the cross’. In the real world of pain, how could one worship a God who was immune to it? I have entered many Buddhist temples in different Asian countries and stood respectfully before the statue of Buddha, his legs crossed, arms folded, eyes closed, the ghost of a smile playing round his mouth, a remote look on his face, detached from the agonies of the world. But each time after awhile I have had to turn away. And in imagination, I have turned instead to that lonely, twisted, tortured figure on the cross, nails through his hands and feet, back lacerated, limbs wrenched, brow bleeding from thorn pricks, mouth dry and intolerably thirsty, plunged in God-forsaken darkness. That is the God for me! He laid aside his immunity to pain. He entered our world of flesh and blood, tears and death. He suffered for us. Our sufferings become more manageable in the light of his. There is still a question mark against human suffering, but over it we boldly stamp another mark, the cross which symbolizes divine suffering. ‘The cross of Christ … is God’s only self justification in such a world’ as ours.1 (John Stott, The Cross of Christ, pp. 335-336)

Suffering continues to be a an issue close to my heart. Other books on suffering which have been helpful to me include DA Carson's How Long O Lord, J Earekson Tada's When God Weeps, CS Lewis' The Problem of Pain, Phil Yancey's Where is God When it Hurts, and my favorite, Michael Card's Sacred Sorrow.

John Stott while not known widely outside of the church led an exceptional life of faith keeping one foot in the Scriptures and the other in the world where he was deeply committed to the salient issues of our day - justice, peace, and climate change. Extensive obituaries extolling his broad influence have appeared in the New York Times, The Guardian, and Christianity Today this week.

He will be sorely missed.

read it last semester and had the same "take home"...was hammered into my brain from several perspectives this spring and somehow I'd still forgotten. Thanks for the reminder of the rock on which we stand.

Thank you for this fitting tribute, which we have added to on the CR. Stott's last book, The Radical Disciple, is a final gift from a good man leaving his last instructions. I recommend it to all.

thanks very much for this, Scott.