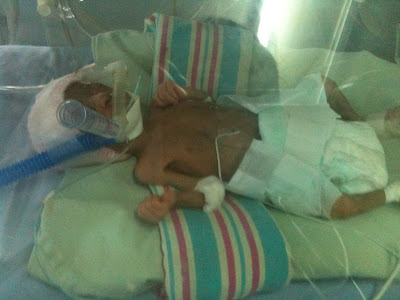 This is baby Mary, about a week after her birth, in March. She was born prematurely, at 27 weeks, weighing 855 grams. By the end of the first week of her life, she was down to 740 grams, we were having trouble feeding her, her lungs required maximum levels of CPAP support. She was very sick. 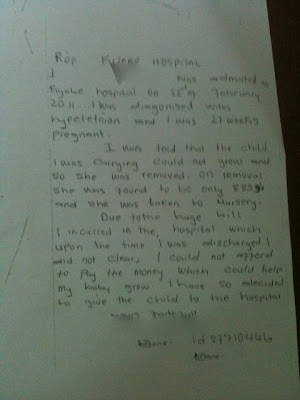 And her mother, who was suffering from post-partum depression, gave up. She had four other children at home, a husband who had not even come in to see the baby, a rising hospital bill, and the sorrowful conviction that her speck of a preemie would not survive. She couldn't cope. She ran away. We involved a social worker to track her down and lure her back, but when she visited she left the above letter, abandoning her baby to the hospital. She went home and told her village that the baby had died. 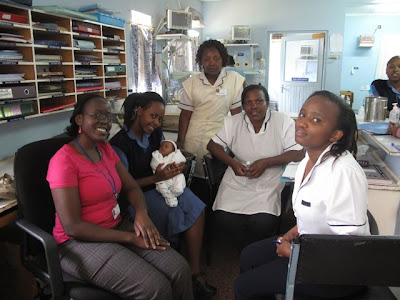 So our dedicated nursery staff stepped in. The nurses and student nurses in particular cared for this infant, month after month, while she slowly healed and grew. And grew. By July she was 3700 grams, a thriving little baby, alert, interactive, attentive, who loved being held. She accompanied the doctors on rounds, or spent her days on all our laps as we charted. Some bought her clothes, blankets, sweaters, diapers. We all loved her, but we longed for her to be back with her family. Mr. John Karaya visited her relatives, involved the child protection officer, the police, the courts, even taking time out of his annual leave to pursue a good custody situation for her. The courts appointed the local chief to sort it out, but week passed after week, and we became concerned that developmentally it was not good for a baby to grow up in the constant light and noise and monitor-beeping of a NICU. 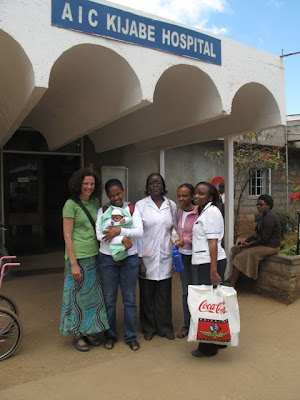 And so on Friday, at last, Mr. Karaya obtained a court order permitting us to transfer Mary to Naomi's Village, a nearby orphanage equipped for abandoned and orphaned children. It was a bittersweet milestone, hating to see her go, but thankful for this provision for her. For the first time in her four months of life, Mary left the hospital where she had been born, accompanied by a delegation fit for a celebrity: two doctors, three nurses, a pastor, and Mr. Karaya. 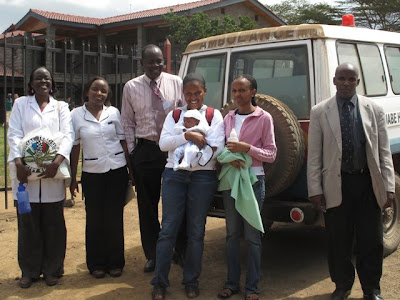 We all piled into the hospital ambulance and drove her over the rough road into the valley, up to the gates of Naomi's Village. 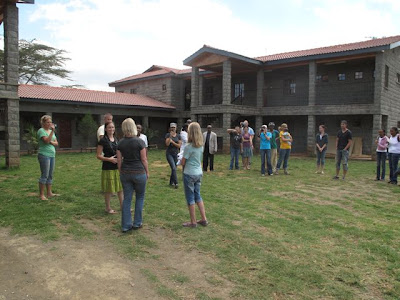 This is an orphanage opened by one of the missionary doctors at Kijabe earlier this year, brand new not-yet-completed solid walls, clean and bright and organized. Dr. and Mrs. Mendonsa have a heart for creating a home to raise dozens of children with no place else to go. Mary was welcomed by their family and a team of summer volunteers, and the only other infant in the home, a little boy who is also 4 months old and will be a good brother to her. 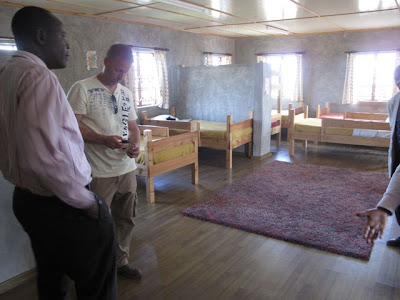 Dr. Mendonsa gave us a tour and shared their heart for the neediest children in Kenya. 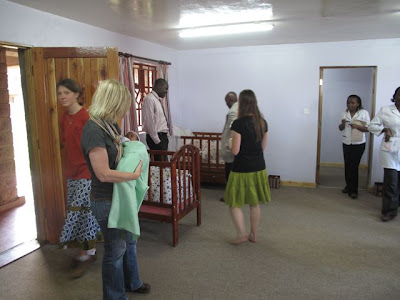 Mrs. Mendonsa held Mary as we toured the the baby room. 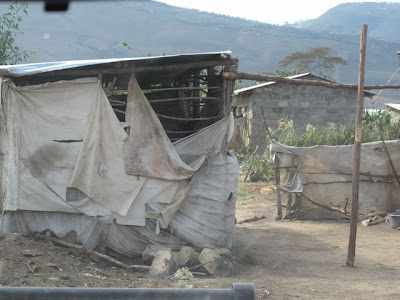 And as we left, we stopped at the IDP camp across the road, a settlement that sprung up after post-election violence in 2008 and has become entrenched. Clearly the orphanage appears to be a safer and more wholesome environment. But carpeting and cribs must be accompanied by nurture and a sense of self and belonging and of God's love. Pray for Mary to find that at Naomi's Village, and for the 21 other children there to be similarly healed.
Posted by DrsMyhre at 12:40 AM

Hi Jennifer and Scott: I don't know if you have time or interest for this kind of thing, but this might be a good way to gain more exposure for your blog, posts, and story. And it is fun to look back at your earlier posts.
It's called 'My Seven Links', bloggers are nominated and invited to share some of their posts in different categories.
Here's the link to my blogpost, from there you can decide if you want to do it.
http://www.isolatedinternationals.com/2011/07/19/my-seven-links/