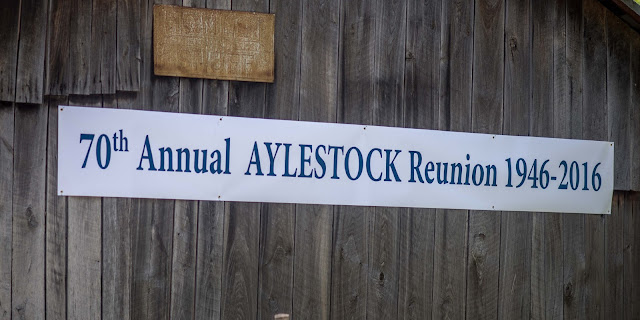 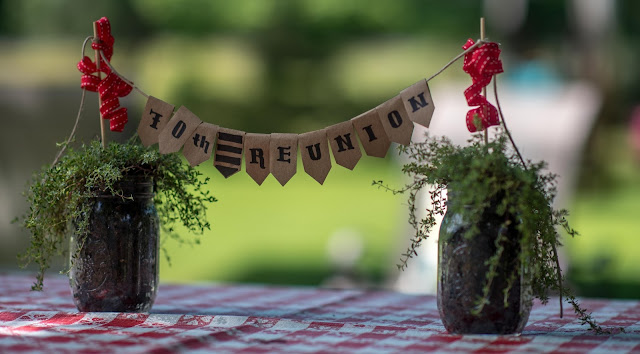 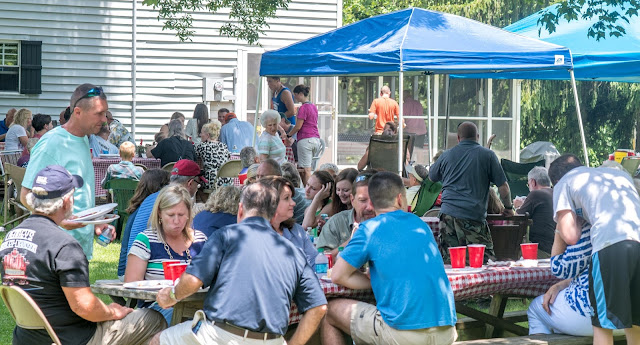 Yesterday the Aylestocks of Sago/Buckhannon West Virginia celebrated the 70th annual Family Reunion.  A Saturday in late June has meant a family picnic gathering since 1946, after all five brothers who served in WWII came home alive.  Since those five only represented 1/3 of the 15 siblings, a family reunion in this clan can involve quite a crowd.  I remember playing in the creek in the woods around Uncle Woody's, contiguous with the hollow where my grandfather and great-grandfather were born in log cabins, as the food was spread on picnic tables.  Later the event shifted to my parents' "Camp", a century-old farmhouse a few hundred yards down the river which they slowly and lovingly transformed into a family gathering place.  As both my grandparents and 12 of the 15 aunts and uncles have passed away, the enthusiasm for the gathering has waxed and waned.  But this year, as the 70th, was a BIG DEAL. 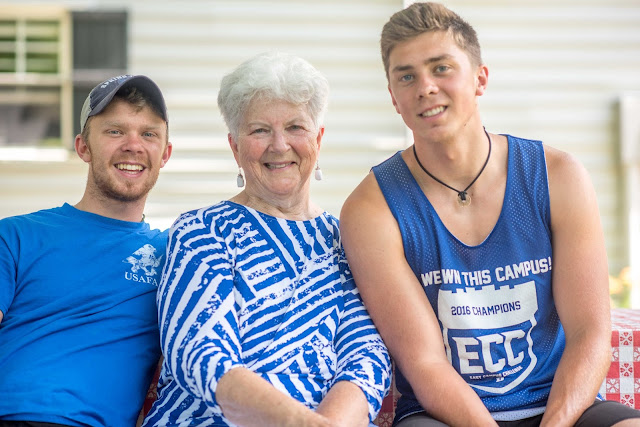 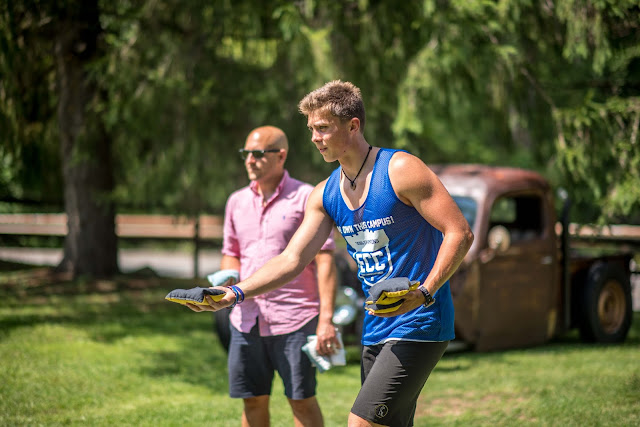 And so on Saturday, 87 of us gathered.  Uncle Woody, the oldest survivor, was hospitalized just a week before; at age 96 with pneumonia and cancer he is slowly releasing his grip on life and peacefully preparing to go home.  That left Uncle Harold and Aunt Ann, the two closest in age to my Dad who was youngest, to represent, along with my mom and Aunt Wonie as faithfully loyal surviving spouses.  The festivities actually start Friday night with grilled burgers, s'mores, and fireworks at a nearby camp.  The Reunion Day centers around food, of course, this year a whole pig barbecued by my cousin Doug, plus tables sagging with salads, breads, fruit, beans, and dozens of cakes and pies.  Games of corn hole, badminton, bocce, croquet, and basketball and baseball occur around the yard.  There is an opening prayer, and we recognize the many other families in Southern WV who suffered great loss in the Thursday night extreme storms and floods.  There is a time to recognize the youngest (Henry, a few months) and oldest (Uncle Harold celebrating 90) attenders, the first-timers, the ones with the most grandchildren and great-grandchildren (Aunt Wonie with 37), those driving the furthest (cousin Vicky and family, from Mississippi), those celebrating birthdays (me, on the very reunion day, and Lois two days later).  People who only see each other once a year, or once a decade, catch up.  Photos of the many missing are shown on ipads, and old photos of decades past are passed around.  Stories are told, hikes to the nearby Split Rock complete with bear scares occur, and a few hardy souls brave the cold rain-swollen river. The youngest form new friendships, gelling as a pack.  The oldest sit ensconced under the trees in the most comfortable chairs, holding court.  As evening gathers, home made ice cream is turned and my sister's famous chocolate chip cookies come hot out of the oven. 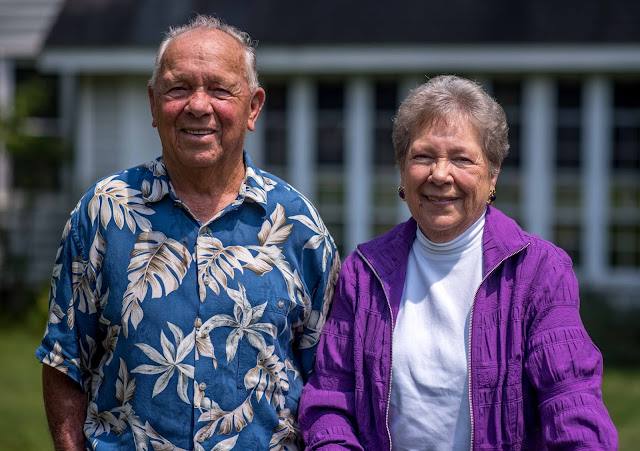 For my mom and sister, and for some of the cousins, this event represents a tremendous amount of work as they plan, clean, prepare, organize, cook.  For others it represents a huge investment of time off work, of travel, of arranging accommodations, of looking up old recipes for coconut cake or a particular cole slaw.  So why keep doing this, 70 years in a row? 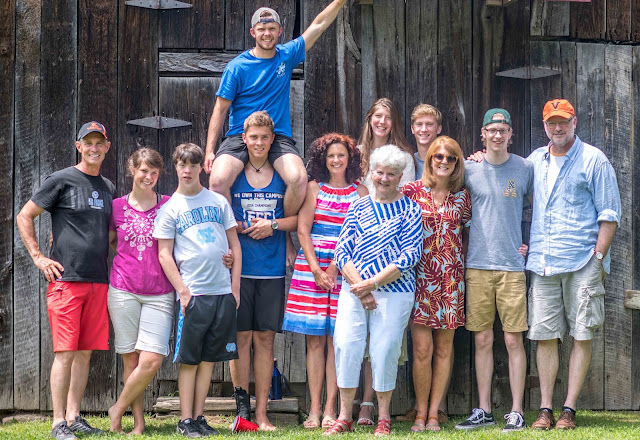 Identity.  In America, a family of 15 siblings who all survived to adulthood, is not common.  So something about that number always made all of us feel special.  We may have been poor WV hillbillies, but by gathering and celebrating our heritage we all gain a little anchor of identity.  We come from this spot of ground, from these people.

Peace.  We are all sinners.  So every family has its tensions, people who feel hurt or left out, who remember offenses, who feel a dearth of love and a disappointment of expectations.  Some feel unappreciated, some feel judged.  But a day of a shared meal, of handshakes and hugs, or compliments and service, goes towards cementing bonds and smoothing squabbles. A day of abundance reminds us that we are all cared for.  A day centered on the concept of family takes the focus off a particular person and levels the field.

Connection.  For most of us, our parent amongst the 15 siblings has died.  Yet a day with one of the remaining siblings reminds us of our own parent, their mannerisms, their teasing sense of humor, their stubborn hold on integrity and common sense, their twinkling eye.  Sometimes a story comes out that brings the old days alive.  My mom was missing in her first reunion photo, which she attended as my dad's girlfriend, because they were "on a walk in the woods."  Hmm.  I asked my Aunt about how they sat around their huge family table, and her assigned seat on the bench between her two brothers was pure torture as she would refuse to eat if they waved their hands over her plate (and her brother corroborated saying "we didn't have kleenex in those days, we had long sleeves . . ").

Perspective.  Let's face it, as life goes on, we tend to segregate amongst people with whom we are comfortable.  But the family connection is based on blood, not politics, religion, sexual orientation, socioeconomic status, education, geography, or any of the common poles of difference in our American life.  So a reunion brings together groups of people who might not socialize otherwise. It also brings us together over time, over and over, so that instead of only knowing a particular slice of a story we see its arc.  Sort of like the book The Time Traveler's Wife, we get that Divine point of view that holds the innocence of youth and the wisdom of age in tension with the messes in the middle.  And the benefit of that diversity over time is perspective. Perhaps a handful of people who are carrying concealed weapons (one cousin thought it funny to ask for a show of hands, and half a dozen went up) find themselves in the orbit of another handful who work for gun control, and we realize the people who think differently are people we love.  I'm sure some of the tattoos would put off some of the people if they weren't attached to our own flesh and blood.  Someone who makes their living in a church jokes with someone who hasn't entered one in ages.  Farmers and soldiers and teachers and doctors and bikers and musicians, all remembering each other as awkward tweens or cute babies, humanizes the next drug-addicted or mentally ill person you meet, because you remember it is only a small part of who they are.   As the token crazy people who moved to Africa and lived in a jungle, I like to think we bring a touch of diversity to our relatives as well, an opportunity to feel bonded with outliers on the spectrum of life. 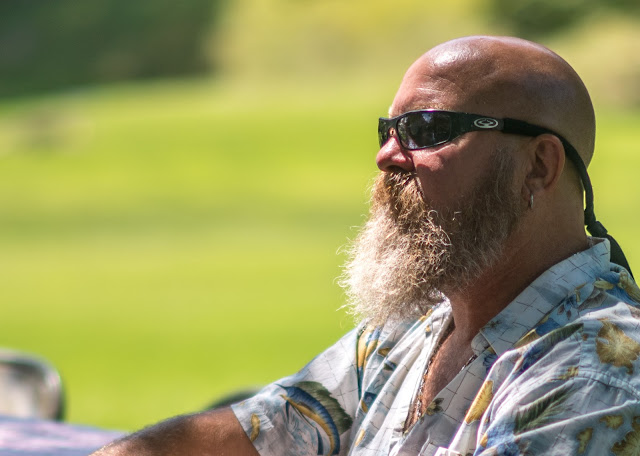 Hope.  Over the decades, one thing remains constant.  Adorable toddlers.  Take away the background and the disarmingly cute blond two-year-old could be her own grandmother back in the day.  The stuffed animal left behind this year could have been my cousin's rag doll "Precious" from 50 years ago.  The youngest ones remind us that in spite of cancers and accidents and horrible sadness, life renews.  Everything we've made a mess of has another chance. 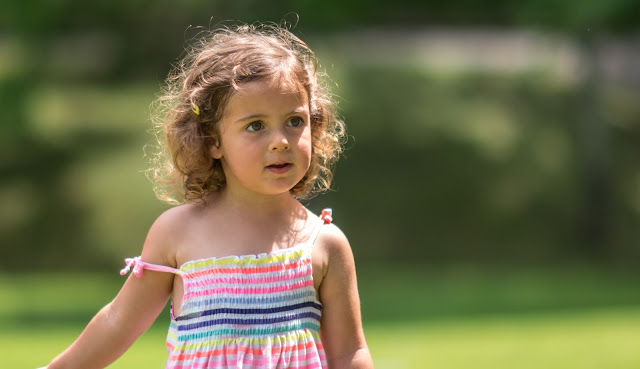 I have only made it to a handful of reunions since I left home.  My kids don't know their relatives well enough, a cost of our distance.  We aren't part of the way things are always done, so we have to ask a lot of questions, and we generally don't hit the right times for being useful.  It is only reasonable to not depend too much on people like us who may not show up for another five years.  But for this year, I'm glad we were able to be at the right place and the right time.  We get a lot of the connection and perspective and hope from our Serge family too, but there's no substitute for this patchwork of people from these beautiful hills.  So if your family has a reunion, try to get there.  And if they don't yet, consider planning one.  The hassle will be outweighed by those golden intangibles.

Which brings us to the closing speech, offered by my 16 year old nephew with Down Syndrome, when cousin Mike the MC opened the stage.  I'm sure we were all a bit nervous, he watches a lot of action hero movies and knows how to push buttons and say inappropriate things for a reaction.  But not this time.  He stood up on a chair, and listed off the people he loved.  His mom, his dad, his sister, Julia, me, and on and on.  Which was the essence of the whole affair.  LOVE.  He got it right, exactly.

This is beautifully written and touched my heart. My husband and I are in our 80's and the Lord has blessed us with a large family. We are having a family reunion of my family members this year, the first in at least 20 years! Thank you for sharing your perspective - I found myself saying "Amen" to it all the way through! I especially liked your expression,"we are all sinners" and the way you described the family at large, the hurts, the feelings suppressed by some over the years, drug dependency....a good reminder of God's grace to us and the need to share that love with one another. I enjoy your blog very much. The Lord bless you!
Betty McJunkin