Foxes have their holes

Home has been something we have wrested into existence by faith over 29 years of marriage, in apartments as student doctors, in our mud-brick tin-roof no-plumbing house in Bundibugyo, in the quaint mission-station house in Kenya, in hundreds of nights of travel, on floors, under the stars, in basements, in tents, evacuated, guests, campers.  We have laid these heads many, many places. 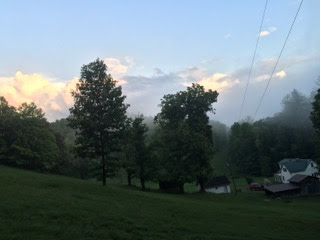 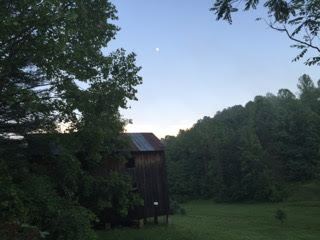 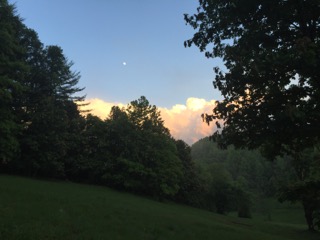 This year, however, was the first time we laid them in a home we could hope to keep indefinitely, an inherited property which we invested in rehabilitating to create a base-camp for our scattered family.  After months of projects, the last few weeks of June saw the pizza oven final touches (the third one Scott's built).  We hosted my sister's family, and some groups of overnight friends from Serge.  We celebrated my birthday and West Virginia Day and the 70th annual Aylestock family reunion.  We had three kids under the roof most of the month, with a touch of Luke.  There were hikes and bike trips and innumerable floats down the river.  There were cinnamon rolls and pizza and homemade pies and tacos.  There were camp fires and s'mores.  There was book reading on the porch and guitar playing in the living room.  Sunday morning playing piano for church, evening inviting neighbors to dinner. In short it was a glimpse of a life that we didn't even know we'd missed all these years. 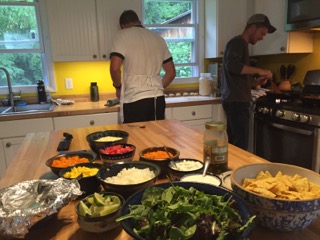 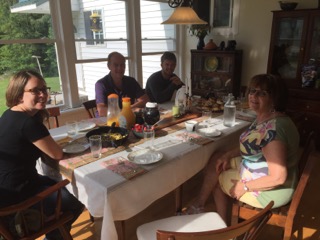 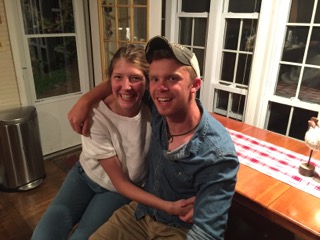 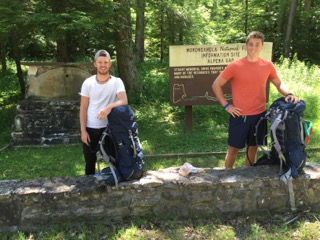 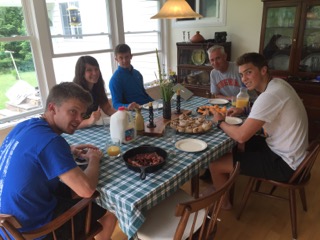 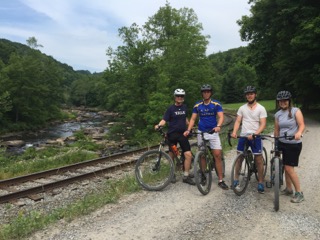 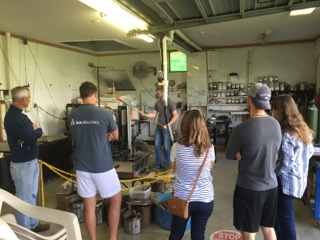 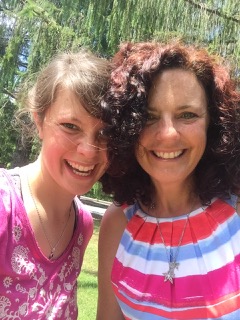 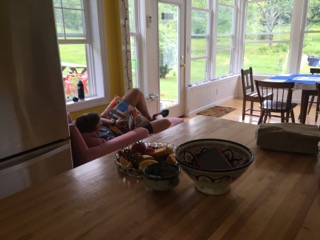 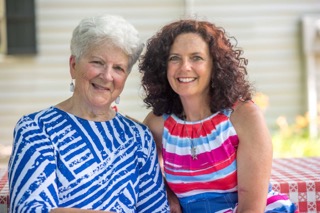 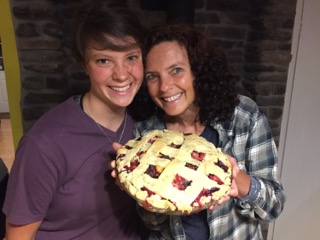 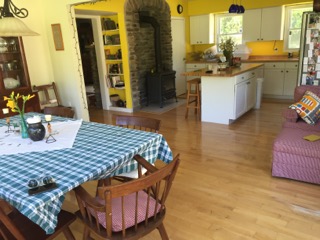 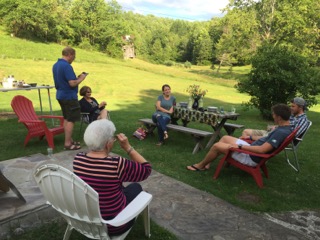 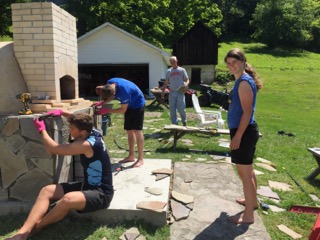 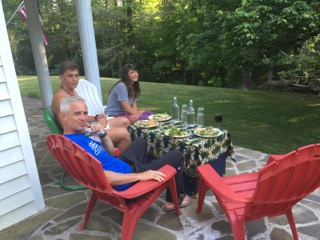 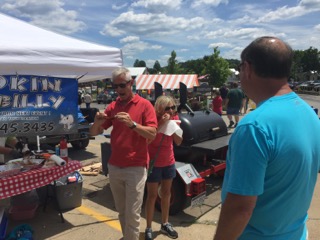 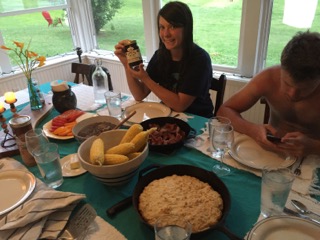 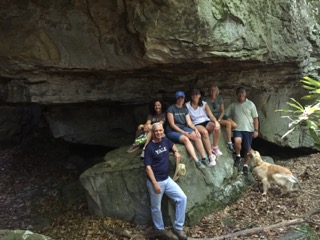 And leaving it is not easy.

In Kenya, we were asked to choose a bird name for our house, so that as missionaries come and go the house names could be more consistent.  We chose "Flamingo", which sounded like a party, and connected with the great Rift lakes of birds.  So before we came here Luke put a plastic pink Flamingo in the garden he made as a gift for me.  Sometime in the Fall, Scott and I woke one magical morning to watch a fox jumping in dainty vertical bounces around the hole of something he was hunting in the side meadow.  After that I started calling this place "The Fox and the Flamingo Farm" which is not only alliterative, but captures the paradox of a quintessentially WV animal with a classic East African one.  It seemed to bind our story.  Then this week, my Bible reading plan gave me this verse:

Scribe: "Teacher, I will follow You wherever you go."
Jesus: "Foxes have holes and the birds of the air have nests, but the Son of Man has nowhere to lay his head."
Disciple: "Lord, let me first go and bury my father."
Jesus: "Follow me, and let the dead bury their own dead."

These words, and this week, have crashed down like a ton of bricks.  Foxes and birds have their homes, even The Fox and the Flamingo Farm can be such a place, but Jesus is calling us to keep moving.  Literally we are leaving Tuesday, the day before Wednesday's funeral for my 96-year-old uncle, who died early this morning.  All year I've been visiting him and my aunt regularly, including some times in the hospital before other family could arrive.  Over the last ten days I've held their hands and prayed. We've waited, advised, reliquinshed, known that death was imminent for him, watched him fade.  So it is a bitter blow to have the timing such that we just miss the burial. 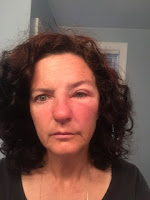 Today has felt somber.  Our last guests left as the news of my uncle's death and my aunt's fall with a broken hip hours before reached us. We heard that two terrible attacks took place in Kenya, one to kill IJM lawyers working for justice and another to target pastors in the North East to whom some of our new team were connected.  I took my last book back to the library, and nearly cried.  Mailed last letters from the post office.  Julia's passport is in a purgatory of the Indian embassy for her semester-abroad visa, which is threatening to make our departure day extremely long and complicated (and may be threatening to not let her depart at all).  Julia and I both came down with a severe allergic reaction to poison-something (ivy, sumac, oak) and are on huge slugging courses of prednisone, with intractable itching and scary faces.  We aren't sleeping great, and feel lousy. The floods that devastated WV were milder, but still present here.  As much as I love Sago, it seems to have decided to send me off with a slap. 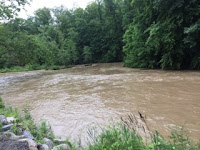 So we listen to the words of Jesus, telling us to move on, again (and I'm hearing them in musical form like this, thanks to the K-Love radio station).  We hold the paradox of a home for which we are thankful, a spot on the earth to which we can belong, and yet in which we can not stay.  We strain to hear the love in this calling, the assurance that we are meant to keep walking on a path that goes back into some dark places.  We ache to see the brokenness and sorrow where we are going, and the grief we are leaving behind.  Pray for us to soldier on. 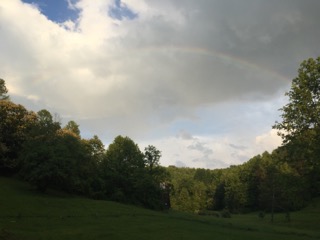 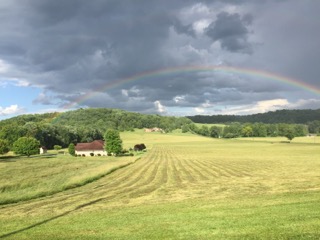 I am praying for you and Scott, for the children, for your families, that you may make this new further transition with hearts that are shining in the light of the Lord, hands that are strong to share his goodness, and feet that will dance with delight in his love. May God bless you richly in your new work. I am praying hard for you all. Judy in HMB

We love you guys and are praying for all of you. Michael and Jane are snoozing in the airport, but we'll get them on the job when they wake up. Blessings on your transition, and on Luke, Jack, Julia, and Caleb. Sorry you're having such a rough send off.
Mike and Ann

Your honesty allows your writing to be raw and tender and human. Know that your Spirit will catch up with your human emotions and give you a peace that passes understanding (the understanding is all too real). Bobbi Campbell

Praying for you this week as you transition away from WV and back into Kenya. We've only been married ten years (and hence only on the move for ten years) but have an understanding of a wandering home. We keep telling our kids "Whenever we're together, we're home." We just moved to Tenwek three months ago, and a few weeks ago my grandfather passed away, which made this call to long-term medical missions that much harder. I was reflecting on the Rich Young Man's sadness at the cost of following Jesus and understand what he felt - my riches are not in material wealth but in family and relationships. That is where your own riches lie also, and hence your heartache, and why there is a sense of loss and sadness in counting the cost of moving half a world away yet again. May Jesus bring you comfort and joy in the days ahead as you continue making sacrifices to obey His call. (storiesinmission.blogspot.com)