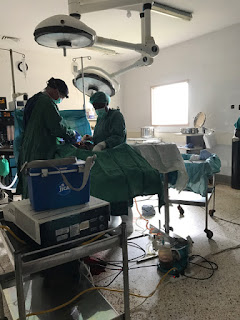 Saturday, about 1 pm, we've been rounding and dealing with patients and crises for about 5 hours, and are about to go buy groceries then meet a taxi bringing a visitor to us from Nairobi.  Scott gets a call from casualty—they have a woman with abdominal pain and bleeding, she's dizzy and barely awake.  I find two nurses holding IV bags while an ultrasound tech confirms an ectopic pregnancy (the fetus is not in the womb, but in one of the Fallopian tubes which then ruptures) and Scott is making phone calls to get an anesthetist to the operating theatre.  Her blood pressure is 70/30, way too unstable to transfer.  It's him, or nothing.  He's done this surgery before, but not often enough to be confident.  Let alone in the circumstances of yesterday:  no power, because the workmen are installing a back-up generator only they're not done yet.  We're out of some of the necessary sutures.  The lab can't run samples.  There's no blood in the blood bank.  I run out to pick up our visitor and by the time I'm back, Scott's in the theater, wearing his headlamp in the dim light. Blood is pouring out onto the floor, the suction isn't working.  A back-up power source was running the electrocautery, but then stops (it turns out the anesthetist tripped over the plug, but we don't realize that at the time).  I stand in the theatre and watch and pray as he works.  It turns out the ultrasound tech wrote down the wrong side, so that takes a few minutes to sort out. As if there wasn't enough else wrong with this picture.  He eventually stops the bleeding, cleans out the clots, removes the ruptured tube, sews her up.  She lost about half her blood volume.  Instead of a post-op ICU, she gets a general ward with no monitoring.  But by God's grace, she lives. 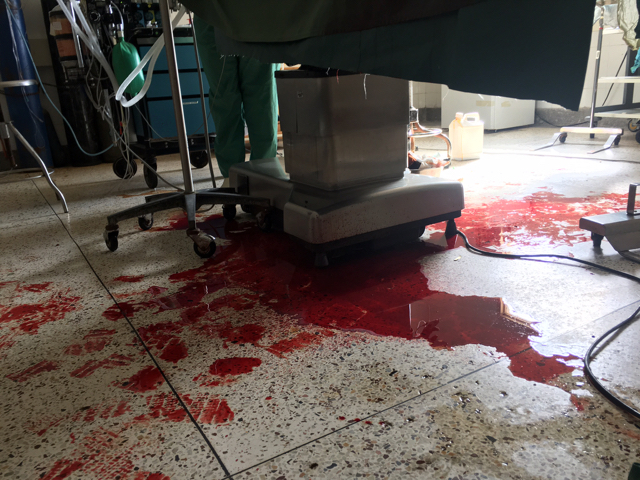 Weeks one and two, before we left in December, seem quite distant now.  There was the shifting rumors, the nursing walk-out, the struggle to manage patients alone, the uncertainty of every day changing, the weight of never being fully off, the couple of days spent pitching in at Kijabe.  But in December numbers at Naivasha were still low, patients stayed home thinking the strike would be resolved any day and they'd come back, there was a collective anxious holding of breath.  When we left, we never imagined that after a month in the USA we'd return to an unresolved humanitarian crisis created by political impasse.  We missed weeks 3-6 of the strike, as mission hospitals kept shouldering larger and larger burdens as the only option for many.  Private clinics continued to rake in their unaffordable-to most fees, and the poor stayed home getting sicker or dying or recovering on their own.  Doctors and the government each retreated into their own camps, willfully refusing to see the deathly consequences of their inaction.  The government offered a 40% pay raise instead of the 300% doctors expected.  No deal.  Here in Naivasha the hospital completely closed its doors for a while, as happened in public facilities all over the country. 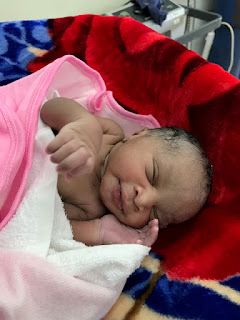 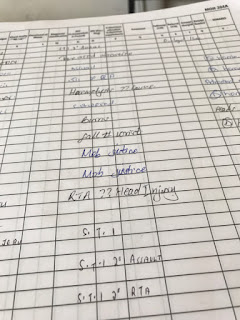 (the miseries of life, admissions in casualty)
Then into January, 4 women died having babies  in a shady private clinic down the road.  And the senior administrative and nursing staff at this government hospital, as well as some in the county seat of Nakuru, said enough.  Our medical superintendent worked with the county leaders to partially re-open, offering maternity and emergency care in two sites, relying heavily on nurses (who resolved their strike more quickly) and some non-union clinical officers.  We are one of those two sites.  Though he's a radiologist, he stretched back to his training and put himself and two recently-graduated interns who had not yet joined the union, on OB call.  He stopped commuting home to his family a few hours north.  As he told us, he decided, this is the time I will look back on and talk about when I'm old.  We walked into this on Wednesday just as things were really starting to pick up speed again.
We may have missed a few weeks, but we're making up for it pretty quickly in week 7. 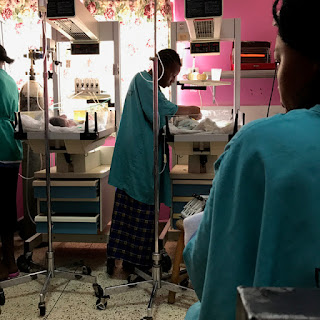 We've been working pretty hard, long days.  It feels like Ebola, the shutdown of services, the wild few who decide to do something about it, the stretch, the constantly shifting horizon .I found 30 babies in the Newborn Unit and 23 on the Paeds ward.  It's me and two clinical officer interns assigned from the county because they are in a different program (non-union) than all those who walked out.  Neither have any pediatric experience.  Scott is the sole OB provider daytimes, and has been on call all weekend, though he will have nights off on rotation with the medical superintendent and the two young doctors and one clinical officer.  The nursing staff is back, though that was never an adequate number.  One or two per shift in each area, including maternity where the one day he counted there were 23 deliveries.  Yes, back to the 1/hour pace. 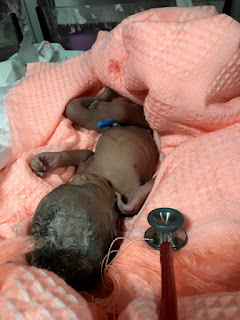 As Scott says, it has been alternately exhilarating and terrifying.  He's tried to refer really sick or complicated patients that are beyond his usual experience, but the only place to go is the mission hospitals and while those are reasonably priced for the middle class, we can not convince many Naivasha-poverty-level patients to go.  Besides the fact that when mission hospital beds are full they actually stop admitting, so finding space is difficult.  In fact they've been sending patients in the other direction.
So the bleeding woman stayed.  And a woman with a life-threatening syndrome called HELLP, who he took to the operating room Friday night to save her life and her baby's, whom I admitted to our NBU.  And a woman whose baby had almost stopped moving completely days after her water broke prematurely, another NBU admission.  And many more.  And while it is satisfying to see clear and dramatic saves, it is not the full picture.  I've lost three patients in 5 days.  And we know there are more out there who aren't coming in. 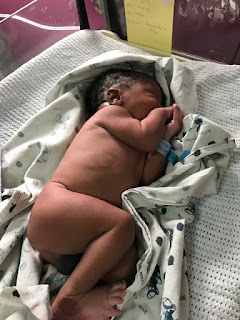 In closing, a few overall strike thoughts.
1.  Necessity fosters community.  It is always good to be part of a group of people trying extraordinary things, and the Kenyans around us are working that way.  I can't see 50 patients alone, and put in their IV's and draw blood and follow up labs and talk to parents and examine and write notes and calculate fluids and make decisions.  So I'm trying to teach the two CO's (one is only part time) a crash course as we work together.  And while I'd like to be the competent senior doctor who breezes in to lead from the front, I've had a rough week of preemie IV struggles.  And I've been rescued multiple times by my juniors.  The humbling lesson that I need them just as much as they need me.  We're in it together.  This leads to some moments of genuine connection, like when a nurse told Scott, "you actually act like these are YOUR patients and not just our patients that we are calling you about."  Yes. 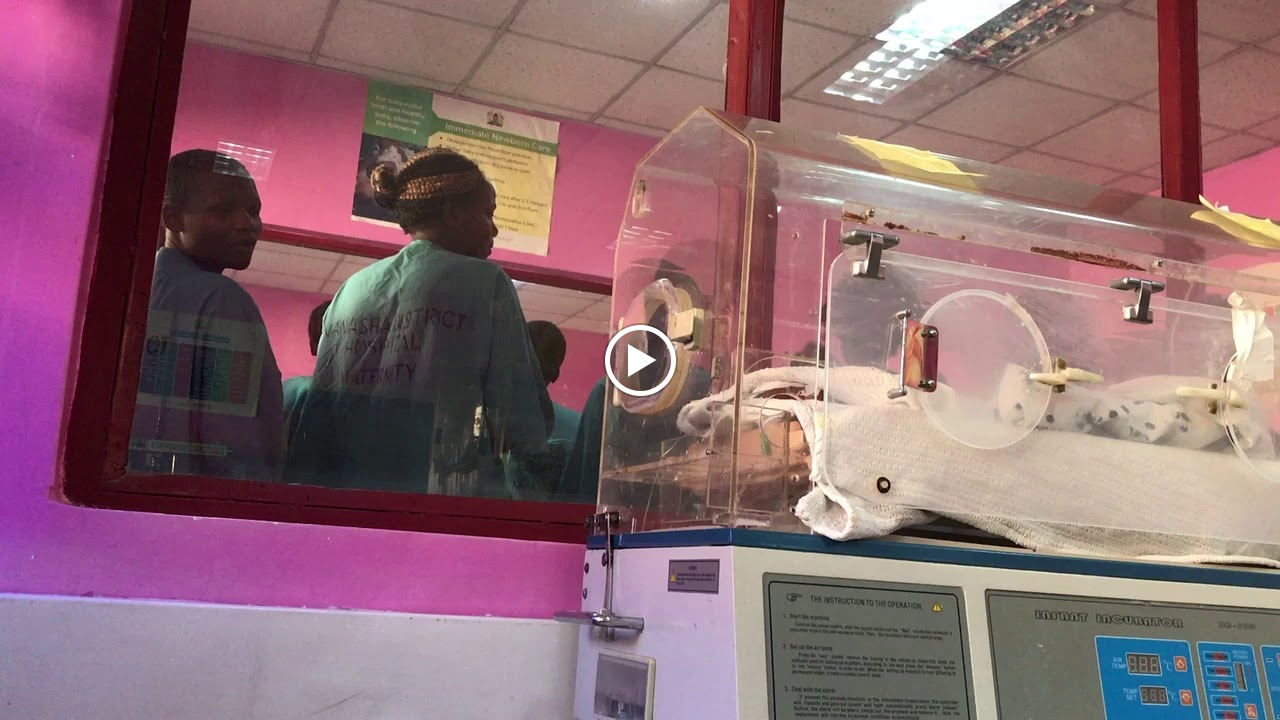 2.  God is present in the midst of the struggle.  The NBU mothers sing praise songs and pray over their babies at the start of each day, in this non-mission hospital.  Scott prays over his surgeries.  We are in over our heads, but patients are still getting better (at least most of them are) because God is here.  This quote was in a devotion we read by Rohr:  When prayer is authentic, it will always lead to actions of mercy; when actions of mercy are attempted at any depth, they will always drive you to prayer. 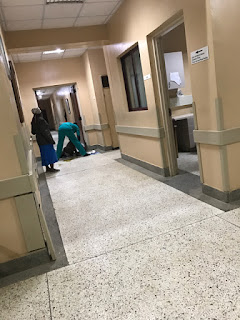 3.  The poor depend upon the Kenyan government healthcare system.  Public health care is a beautiful thing, but the system here is broken. I guess all systems are broken.  There are good people who mean well on both sides, who feel passionately justified in their positions.  There is also corruption, despair, injustice, greed, indifference, entitlement, and all manner of evil in this situation.  So while the government and doctors' union drag on in their stalemate of no-compromise, the poor keep suffering. A few times this week, I've wanted to feel really sorry for myself.  I have a nasty cold.  We're both jet-lagged. Things don't work.  But then I admit two surviving of three triplets born on a path on the way to the hospital, to a mom with AIDS.  Or a premature baby born to a 15 year old 8th grader who got no prenatal care.  Or walk out to see a mom delivering on the floor.  Then I stop grumbling and remember the privilege of walking alongside these courageous, polite, and generally cheerful women. 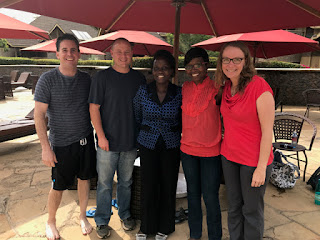 4.  We can't keep this pace indefinitely.  So please do pray for resolution.  In the meantime, pray for stamina, for wisdom, for miracles of healing, for kindness towards those we work with and each other, for pockets of time to focus on the rest of our Serge job and family and life.  And pray for the mission hospitals too.  They have many more staff, but are still feeling the push of unsustainable numbers of patients (another quote from a Kenyan "the Kijabe hospital Outpatient department is like a political rally:  standing room only").  Pray for our colleagues there, and in Chogoria.  (Photo is of the Kijabe Paeds team who had a day off at a nearby hotel; I was able to run over for a half hour and greet these friends, a great group of doctors). 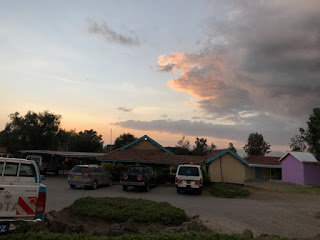 5.  And lastly, in the midst of the craziness of the last five days, we're grateful for our neighbors who kindly look out for us, for an old friend Scott Ickes who worked with us in Uganda and is back to visit in his role as a professor of public health at U of Washington working on a grant for important research on the outcomes for kids post-hospital-admission, for our dear friends the Massos and Bethany who made us lunch at Kijabe when we ran over to drop Scott off today.  As it says in one of my favorite movies: No man is poor as long as he has friends. 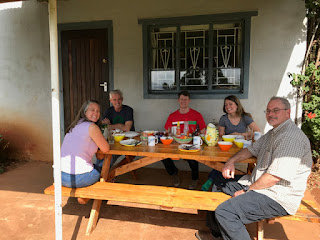 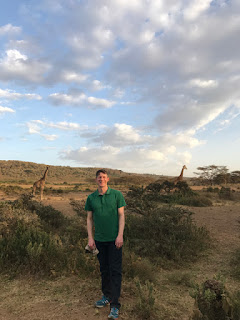 Thank you for sharing. We have been praying as a family about the strike and the drought, but not really having details. May the Lord give you all stamina, work miracles, and grant you patience as you work together. We will continue lifting you up in prayer!

Wow praying for you all and the community there. My struggles and complaints pale in comparison to what is going on around you. Good reminder to be thankful and appreciate the system we have here.

Touching story. We thank God for the strength He's giving you there.
Thanks for the hardwork.

Thank you for sharing this situation and how God is present in the middle of it. I will be praying for the resolution and for your needs as you requested. God be with you all.

I'm a retired nurse and have gone through some very difficult situations. Nothing compares to what your going through. May the Lord richly bless you. May it all end soon. For the patient sake. Thank you for your hard work and dedication.

Hey,
Thanks for sharing such an amazing and informative post. Really enjoyed reading it. :)