Home again home again, jiggity jig and into the mire . . .

Saturday in Nyahuka and while literal pigs are going to market, we are thankful to be 1. Together 2. Back "home" in Bundi 3. Reunited with the truckload of stuff we packed last December in Kenya. 4. Hearing the news that Steve moved to rehab. What a week. I will recount a bit here since I know people prayed, and it's good to tell the realistic side of the inter-continental life which is more disjointed than one might think. 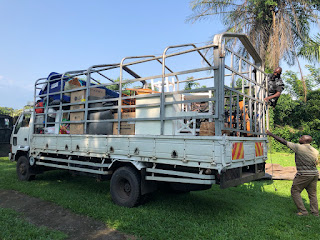 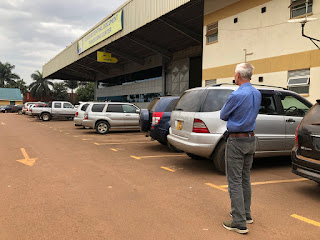 While I was being re-routed through Munich to Brussels to Kigali to Entebbe, Scott was on the phone continuously with the truck contractor and our clearing agent. As I landed late Thursday night (24 hours later than scheduled, and with neither of my two bags making it) the truck was spending its third night hostage at the Malaba border. It seems that in the list of requirements for importing our household from Kenya to Uganda, they forgot to mention that we would need a personal interview with the Uganda Revenue Authority.  So 7 am Friday we headed to the URA headquarters in Kampala. It took us a while to figure out who we needed to see, and the supervising person was pretty unpleasant at first since our agent had not made a required appointment. He sent us out to come back at a time more convenient for him, with about 20 documents that we were thankfully able to download from previously applying for our work permit, to prove we were missionaries, that we had lived in Kenya, that we now had work permit/visas for Uganda, that we were with a recognized tax-exempt NGO, etc. We really had no idea what we'd do if he refused to clear us, but thankfully our relationship improved with each passing hour and by 1 pm we were all smiling. Thinking the truck was going to be on the way any moment, we skipped any errands or meals or shopping, and hit the road to reach Bundibugyo by not-too-long after dark.  Which we did, pretty exhausted from multiple flights, time change, the murkiness of getting through tax exempt, the 7+ hour drive. As it turned out, the Malaba border agents managed to still delay the driver until 6 pm!  So we thought they would sleep in Kampala and perhaps arrive this evening. 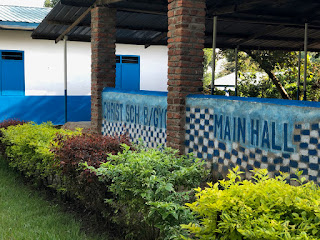 But as we walked to the market this morning to buy eggs and fresh milk, having stopped in at Christ School to check on the flurry of projects initiated during the student break between term 2 and 3 which started Friday, we got a call that the truck was arriving! They had driven straight through the night, from the eastern to the western border of Uganda.

Thankfully we could call one of our foster-son old students who collected one more, and they helped us take everything off the truck and re-stash it in a room we had built back in the day as a guest room between two containers at our old house. There is a mirror that the Massos gave us as a 20th anniversary present, and it survived moving to Kenya and back to Uganda once again. Kind of amazing. It's complicated, but for now we will stay in our borrowed quarters (the Dickensons have been graciously allowing us to inhabit their place) but as they return and others leave our former house will be empty mid-October. We didn't want to wait to bring our appliances and furniture then, because we have new team mates and meetings and a CSB 20-year party and a language intensive and a pastor training . . . all before we move. So this was the best time. I pulled my keyboard and bike out, and Scott reclaimed the nearly-defunct espresso machine. Otherwise we are trying not to mix our things and the Dickenson's so we will wait to unpack for another two months.

Steps forward and steps back, as always. Uganda is feeling more like home. But within an hour of our successful truck arrival, we also had an email threatening a law suit from someone who is working against us and the mission here. But, that's OK, it's why we are going to all this trouble to move back for this season. The Kingdom comes, but in slow increments. A few months ago, I remember being very moved as we sang "there is power, in the name of Jesus, to break every chain" in the church service at Kibuye in Burundi. At that moment, my heart was full of prayer for the adoption of a team child to be finalized after two years of angst and delay. That chain was broken and she is forever part of the family now. God sees the details, the single orphan, the marginal school, the struggling church, the near-death episode. And we trust that the power which brought us to this point will see us through, in spite of those back-steps and weariness. 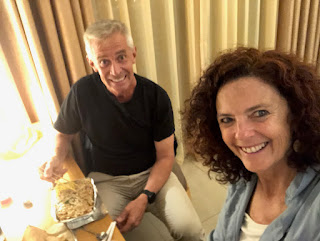 midnight dinner after putting in claims for lost bags . . . still hoping they are found!