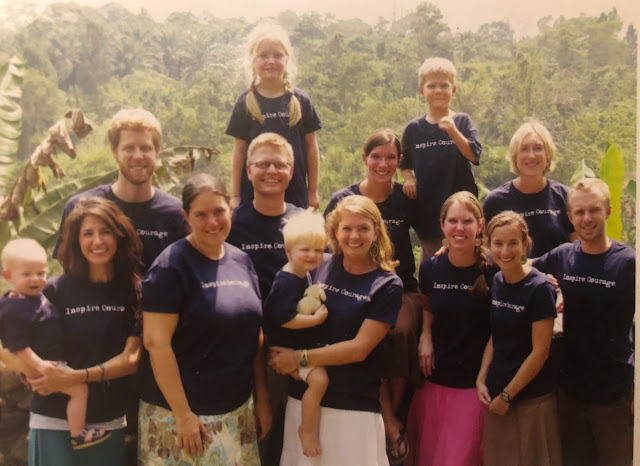 Team Bundi on my prayer card circa 2012, Travis in glasses, Amy front center holding Adian, Lilli and Patton standing on wall in back 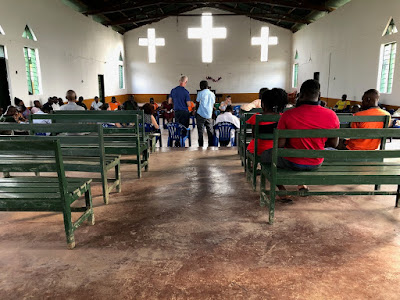 Church this evening, pc Alanna, as Scott shared from Rev 21

Dr Travis Johnson died yesterday. Travis and Amy joined Serge to serve on the Bundibugyo team, and were immediately and rightfully seen to be gold. Fun, faith-filled, competent, eager, courageous people who would inspire courage in others as well. Our leaders had wanted to move Scott into an Area Director position, and we were questioning anyway the sustainability of distant boarding school for the duration of our kids' high school, so win-win seemed clear. Travis and Amy with their children Lillian and Patton would come to Bundi and overlap us (the plan was a year, but by God's grace baby Aidan was a much better plan so that ended up being only half a year) then they would remain as Team Leaders while we took a few months of Home Assignment to put Luke in college before moving to Kenya to work at Kijabe Hospital. We (Scott initially, both of us later) would be supervising the Johnsons in Uganda and the Nairobi team, as the Area Directors for Africa. Travis was a a family medicine doctor like Scott, an all-around medical practitioner as well as a leader and teacher. Amy was a teacher with three young children, and a passion for literacy. She had an interest in the community library we were trying to establish and so started the "Books for Bundi" program, while leading the team with Travis.

A few months is never enough to be prepared for surviving let alone leading in a remote and difficult place, with its deeply entrenched spiritual fears, physically challenging conditions, and constant turnover of personnel. Diving directly into leadership while still getting one's balance as parents is no easy task either. The way those nearly 3 years weighed them down, spread them out, brought them to Jesus is their story to tell. But they created a home and established a Sickle Cell Disease clinic, saw patients, hosted and recruited new team mates, invited interns, planned retreats, went on safari, developed friendships, facilitated reconciliations between people, oversaw Christ School, prayed against spiritual warfare, nursed pets back to health and mended the tender hearts of their kids, and a thousand other things. Some of the key partners we have now: Ann Kieser, Josh and Anna Dickenson, Michael and Lesley Stevens and others who work in the Home Office, were shepherded in by the Johnsons too. They invested in young CSB grads. Travis preached and prayed and blessed many. While on their own home assignment, the chronic intestinal irregularities that have plagued quite a few foreign workers here just didn't get better for Travis. It took time to treat parasites and decide to pursue further work-up and at the end of the process we were shocked to find out he had a late-stage small but highly dangerous cancer in his colon that had already spread. He was 37. They were just at the turning point of blossoming in Bundibugyo. And they had to cut that plan short, stay in the USA for surgery and chemotherapy.

And in spite of a less than 1 in 5 chance of living to 5 years, Travis lived 7 more years after diagnosis. The Johnsons kept their heart for Bundibugyo but were never able to move back here due to round after round of chemotherapy (62 courses), surgery (6 major and many minor), radiation (20 treatments) and immunotherapy (18). Consultations.  New combinations of drugs. Two steps forward and one back. Fasting and prayer, anointing with oil. Vegan smoothies and marathon bike rides. They went to battle with this cancer, all the while creating a stable life for their family, working at jobs, attending sports games and school events and serving on the Serge board. For most of those 7 years Travis appeared to be trim, tan, grinning, youthful, bubbling over with ideas and absolute assurance that God's goodness and love were to be trusted. Until the final couple of months, with metastases to the brain, he was indomitable. He carried us along in his hopefulness, praying for cure and extending the months.

I saw the news from Amy in the early morning, and I'm sure others did too. We decided there would be a need for some community gathering to mourn. In this place we are hard-wired to go to the grieving. There is nothing higher in priority than sitting with the bereaved. So we mentioned to a few people that we would open the community center at 5 pm for prayer and songs and testimony. Remember that Travis spent about 6% of his life in Uganda, and has been gone for 7 years. But somehow the very intensity of life makes those years loom in importance, for the Johnsons and for all of us. So when we quickly put together a plan with Pastor Kisembo (prayer, scripture, sing, speak) the chairs began to fill until there were 50 people or more. And our service went on for two hours, and probably could have continued another except for darkness. The ENTIRE Christ School staff walked up the road, even though only a handful had been teachers when Travis was chairman of the board. There were young men who had been fatherless, old women who had found an advocate. Dozens of people told their stories. Travis gave me a job, Travis gave me advice, Travis shared this verse with me, Travis invited me into his home, Travis sponsored my education, Travis told me not to worry he would help me, Travis went and looked for my sick husband and brought him home, Travis came to my house. People who felt seen and loved. Who felt connected and safe. 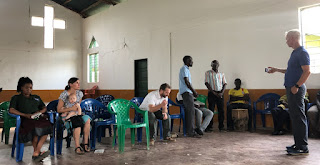 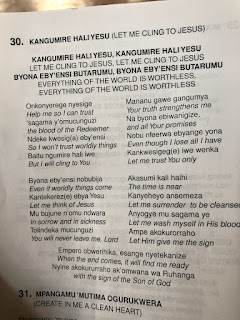 clinging to Jesus, our only comfort in life and in death


The very last two testimonies, though, were my favorites. Byomuntula told a story of Amy playing a prank on Travis that involved a bowl of water balanced over a door, and a surprise dousing. He was mystified by this act of disrespect from a wife . . then mystified even more when Travis laughed. He learned that humor is part of marriage, that joy trumps order. Many people described Travis as joyful. Then Isaiah Kule spoke of the other side of Travis, his determination to help and to change, his sacrificial spirit. When Isaiah was an orphan on scholarship at Christ School, he had an opportunity to work alongside Travis by translating for him. Soon he decided to change his career direction and apply to medicine like Travis. And Travis agreed to sponsor his education through the Kule fund. He spoke of how this continued even when the Johnsons left, staying in touch, sending gifts. Then he said, "one of the last verses Travis shared with me was that God wants me to call him Abba, Father. He told me that I should stop calling myself an orphan, because I have a Father who is caring for me and watching over me, who is meeting all my needs. " Isaiah was barely controlling tears and paused to get in control. Then he looked directly at the phone where Scott was recording testimony to send to Amy and the kids. "Lilli, Patton, and Aidan, you are not orphans either. God is your good father. God is the one who will meet all your needs." 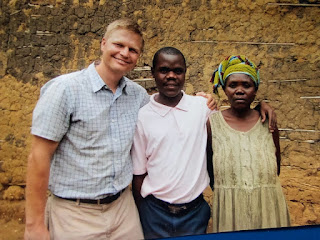 Isaiah carried this photo from about 2012, when Travis reached his home. His mom is on the right.


Wow. Travis preached to this fatherless boy many years ago, and now he is preaching back to Travis's fatherless children. 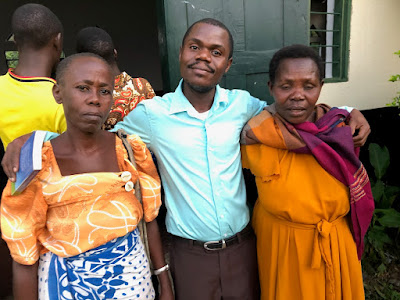 It hits me that this moment is what it's all about. We are here to seek out the marginal, to invest in the poor, to share what we have been given.. . . . but the truth is that we are needy and lost ourselves. And if we press into this long enough, we find those very people pouring back the love and truth to us.

Pray for the Johnson family. Pray that when they look back over life, they will have a tender spot for this place and its importance. Pray they would walk by faith even right in the thick of their sorrow and their questions. 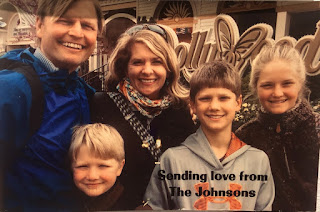 A less outdated but still not current prayer card, the one taped to my wall


And though this story is not about us, we would also love prayer. This team has had 8 team leader families over its 30 years of existence. Three have left because of cancer at surprisingly young ages (all died). Two had children with significant needs that could not be met with the limited medical and educational resources here. Two stepped down due to extreme feelings of burn out. It has not been pretty, from a certain perspective; it feels like this job is impossible. It's a sobering line-up that is repeated in many places. We can run and hide, or we can say that until God pulls us out with something equally dramatic, here we are.

He will remain an inspiration for my life, thank you Travis..and thank you God for having him

No prayer is left unanswered though we still sorrow that his healing was not this side of heaven. Thank you for sharing. His life exemplifies how we should live.

We will miss the true Love you had for us but I am sure you went to a better place and we will be reunited one day. Loy