Choosing our Story: on meat pots and wilderness and highways and faith

This week the epic of Exodus took me through chapter 16. Literally the camping crowd of Abraham's descendants are days past what surely must have been one of the most dramatic rescues of all time, army closing in behind, deep water ahead, a massive migration of humans on the move from oppressive servitude towards a hope of a peaceful existence with their own gardens and government and worship. God had sent an obscuring cloud behind to hide them and a wind ahead to clear the path. These people had passed unscathed through the sea, waters parted to safety, then seen their pursuers drown and turn back. They had danced and sang, and three days later when they were thirsty in the wilderness God provided water, then led them to an oasis of palm trees and wells. Another week or two passes as they move further into the rugged landscape. And this is their summary of the story as they complain to Moses: "Oh, that we had died in Egypt, when we sat by the pots of meat and when we ate bread to the full! For you have brought us out into this wilderness to kill this whole assembly with hunger."

What??? Pots of meat and easy bread?? What about the cry they had sent up to God for deliverance as they were beaten, despised, stripped of any rights, forced into hard labor making bricks and building pyramids? What of all they had seen as God threw onslaughts of frogs and hail and deep darkness and death on their oppressors, while preserving their lives, to the point that they were not only allowed to depart but given bounties of gold to just get out? What about the prior weeks of partying by the Red Sea when they walked away from certain doom?  How quickly heat and hunger change our memories.

They are in the wilderness. The space between the promise and its fulfilment. Between the release and the arrival. Between a taste of freedom and a holistic life. In other words, they are where we all live.

In that context of a harsh environment, a weary body, a questioning soul, they look back on the facts and frame a story that makes sense to them. They are now the sacrifice, brought to die. Still caught up in the religion of retribution.

In actual fact, however, three chapters prior we read the real story. God did not lead them up the coastal Mediterranean highway, though that would have been shorter. Why? Because God anticipated that an immediate confrontation with hostile national forces would have frightened them into returning to Egypt. They were not ready for war. They needed time and space to form a national identity, to learn to worship and to trust. To meet God face to face, on Mount Sinai. This was the theme of our East and Central Africa retreat two years ago with Greg Thompson, the invitation to intimacy.

Two story frames for the same situation: one based on fear, we're here to die. The other based on love, God protecting them from disaster, God inviting them into relationship.

Well, I can complain with the best of the Israelites. Last week was sopping with heavy clouds and constant rain . . but today is too hot with unrelenting sun. It's a miracle to have a son who turned 27 yesterday, and in the last year married a woman whom we love and survived his internship in orthopedic surgery . . but I felt the familiar aching complaint of distance, missing yet another birthday as we have for over a decade. There is always too much to think about, to do, always the feeling of being inadequate and a bit of a disappointment, of letting down people I should love better. There is always one more need, one more knock, one more tale of desperation from which I would avert my eyes. Woe are we. 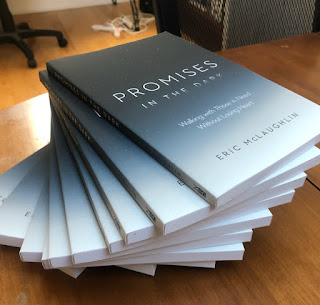 Yes I bought a stack. It's that good.

In our Team Meetings we are now reading Eric McLaughlin's excellent book Promises in the Dark, Walking with those in need without losing heart. (side note . . to sign into a free webinar with Eric tomorrow follow this link). This week we talked about all the ways we feel weak, frustrated, angry, complaining, overwhelmed, despairing, insufficient to the task. And the ways that we react to that feeling often being to blame others or God, to complain, to control the little bit we imagine we can, to escape into small pleasures, or deny the realities that wear us down. Perhaps we are just like the Israelites--trying to construct a story where God is at fault. But that story misses the bigger story God is telling. My grace is sufficient, my power is made perfect IN YOUR WEAKNESS. Not the wilderness and the misery as making the best of a bad plot twist, but the thorny current problem as the very path that God has given us out of love.

God rarely pulls back that curtain of explanation. We don't normally find out that the coastal road would have led to war. We just find ourselves in the literal or metaphorical wilderness, in lonely hearted longing, in long hard days, in losses and suffering. We find ourselves unable to fix a comfortable path, and that is the moment of faith. Can the wind of the Spirit blow here? Can the streams of grace spring up in this desert? What story am I living in, a tale of fear where I am vulnerable, God is distant, and evil is relentless? Or a story of mystery where God has brought me to this exact moment for a redemption I can barely understand? 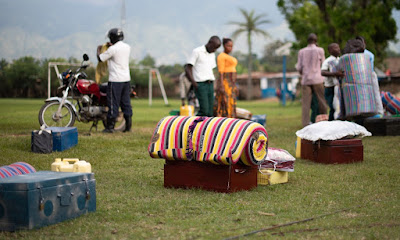 Students arriving for the 2020 school year, a big reason we are in this chapter of our own story 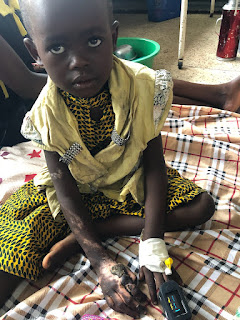 And another glimpse into our story, patients for whom justice calls for care. A little girl with burns above, a hungry baby with a cleft lip and palate below. 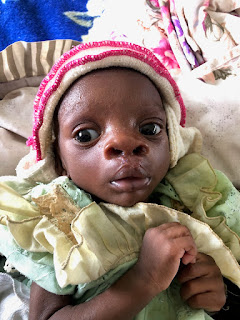