SERE-ING through COVID: Day 174 in Uganda and trying to RESIST

Parallel to COVID upending our world killing over 900 THOUSAND people, and the economy tanking causing half of families in US cities to experience un- or under-employment and all families in the majority world to struggle more for food and health care, and the political order wobbling in response to those two things with the largest sustained movement of protest in US history, and some pretty crazy environmental cataclysms leaving Scott's mom in an orange haze of smoke and our Utah kids and Oregon niece and nephew way too close to fires  . . . . life has been lurching forward on other fronts. Sometimes it is hard to know what daily life looks like for most people. Much of ours is the same crowded ward and plowing through patients with insufficient help, to find places we can make a difference . . . only we are doing it behind smothering masks, with even more interrupted-than-usual supply chains, more delayed-than-usual response from the Ministry of Health. Or meeting for mentoring, prayer, supervision, study, only now it's outside with spacing or online by calls and zooms. Or sitting at a desk, only now it's hard to think more than a short distance ahead and the general weariness of crisis hovers.  One big difference for us has been that our semi-annual meetings as Serge leadership have gone to remote-online rather than gathering for fellowship. So whereas in Septembers past we were spending a week with the Executive Leadership Team and all the other Area Directors at a conference hotel somewhere, having meetings and extended times of prayer but also long talks over meals or relaxed evenings of bocce . . . now we are dialling in to four hours of zoom each day this week. And while we miss the face to face fellowship, the silver lining is that the zoom technology exists, we actually ARE getting decent communication, and the Holy Spirit is not limited. I was dreading it at first, but now it's Thursday and I'm looking forward to 4-8pm (OK not really thrilled to be in maybe the most Eastern therefore latest time zone in the group, and that means that in spite of trying to slow down 8a-4p pacing to have something left for the meetings, it's still a long day, but other than that . . .). 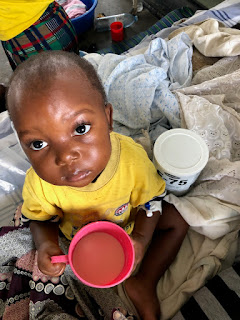 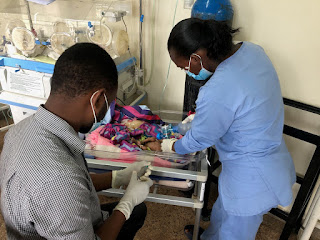 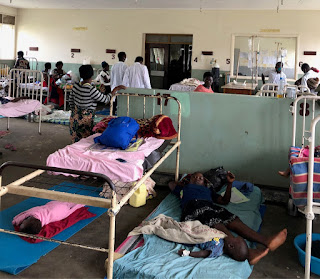 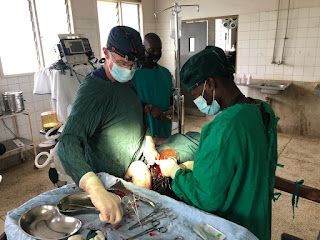 (Above, the mornings, Below, the evenings.) 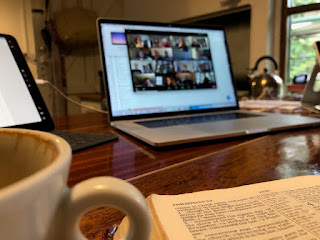 And for our kids, residency marches on with surgeries and calls (Luke), trauma nurse-practitioner shifts (Abby), gruelling training in tactics and leadership (C), farm work feeding the hungry and extra shifts taken at a local bakery (Julia), and the final dissertation completed with an uncertain horizon of job hunting (Jack). Except for Jack, everyone has a steady job with disparate but sustainable income. Everyone wears masks and plans their life around not harming others. Everyone is a bit limited in the opportunity for fun, or friendships, or down time, but handling the year with some resilience.

The next step for our soldier is a course called SERE, so that acronym was on my mind this morning. Survive, Evade, Resist, Escape. As his brother put it, oh, it's basically about suffering, he's really good at that . . . .Sigh. It's been over 8 years since he started on this path, and he's done this kind of SERE training before, but I am sure this round will be the most intense. The idea is to be prepared for being caught behind enemy lines. If your plane crashes, if the battle goes into unanticipated failure, if you are betrayed, what do you do?

How much of life in general follows the SERE pattern, I was thinking this morning? Most of us are trying to SURVIVE 2020. We are often behind enemy lines so to speak, living in unfair and imperfect situations. A lot of our energy gets taken up by the basics. I know for us, going 5 months without a trip to the groceries in Kampala meant more dependence on basic local food, a minor inconvenience. For many families, survival means stretching inadequate budgets, depending on stressed support networks, juggling home-based distance learning. My special-needs nephew misses his sports and social programs, which are survival not fluff. Our elders are surviving with less too, being isolated and confined. If we get this virus, survival will not be assured in a land of limited oxygen and almost zero intensive care. We are also trying to EVADE more exposure, evade being caught with no options, evade the worst consequences of upheaval, evade floods and landslides. And we'd all like to ESCAPE into 2021 or beyond, or into a more just world, or into a holiday. Even the church seems to be in this mode of just hunkering to survive, evading the pitfalls of politics perhaps, escaping towards Heaven.

None of that is inherently wrong and each has its place. But an anchor in there is the word RESIST. How do we live in 2020 resisting evil?

Maybe the same way Jesus lived in 0030 resisting evil. Yes, he had to survive and evade and escape too. His parents struggled for safe shelter to survive birth, fled to Egypt to evade genocidal soldiers. There were times he escaped angry crowds or the pressure of people's unending needs, with early morning mountaintops or desert marathons. But ultimately he had to walk right into the worst of evil in a posture of resistance unto death. He resisted the false narratives of his day by turning upside down the prevailing notions of who is blessed, resisted the shortcuts to fixing everything by means of power, instead focusing on heart-level changes in a handful of followers, resisted the forces of death and disease by touching individuals with healing miracles, resisted the injustice of his religious culture by eating with and embracing the marginalised people. Mostly he resisted the expectations for a Messiah by allowing himself to be killed. This meant resisting even the well-meaning pleas of his friends, resisting even the desperate desires of his own heart in Gethsemane. 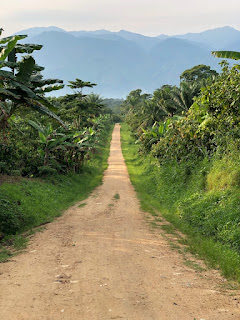 One of my favourite verses is Rev 12:11 "And they overcame him (referring to the dragon) by the blood of the Lamb and by the word of their testimony, and they did not love their lives to the death."

That is how we resist I think. First, it is grace, we can't resist evil on our own. The blood of the Lamb means that the death and resurrection of Jesus definitively defeated all evil. That is our foundation, trusting a power outside ourselves, an event that already occurred, being part of a family whose identity and ultimate home is secured. Prayer is our foundation of resistance, because in prayer we are oriented to God's work in the world not our own. Second, the word of testimony. Speaking, writing, bearing witness to truth is the biggest tangible blow to evil in our day. For some issues that is highlighting facts: the efficacy of a mask, or the statistics on racial disparities in mortality. For others, our word is our story, the witness of how we are living based on a different set of values, or ways that God has worked. Third, evil is defeated when ordinary people live lives based on love. When avoiding death is not the most important metric, people do evil-defeating things, like starting businesses to employ women trapped in sex-trafficking, or teaching preschool, or praying over neighbourhoods marred by violence, or creating new music and art.

I don't know what kind of RESIST-ance the SERE course teaches. But I do know that God's people are called to resist with their trust, their words, their lives. We can emerge resilient in 2020 as we embrace faith that God still has the final word and will bring good. As we choose to speak truth, giving no shadow to rumour and lie and fear and hate. And as we engage in acts of justice and mercy, lives oriented outward in whatever way we can in our little spheres.

Oh, and as you're resisting evil by looking for ways to serve, by bearing witness, by praying . . .don't forget to vote. And send prayers for the soldier in SERE.

Very pleasant material. Thank you for reminding us of the power of grace especially at tough times. We shall all survive by God's grace. Thank you Dr Jennifer

Thank you. My suffering here in the US in minor compared to that of your patients and neighbors in Uganda. But even here I need to "SERE", to endure what comes my way patiently and faithfully in praise of God for making this possible. Thank you for the encouraging reminder.

Thank you
Familiar with SERE, this struck a chord