First, the post below will be better than this. It has big thoughts. Today is not a big-thoughts day, it is a Monday drenched in rain and death.

We should have had a clue when the morning report mentioned 171 patients in our 100-bed hospital. 76 on Paeds alone. It was one of those days when you have to literally move bodies out of the way to get to the patients, when you have to step on one person's mattress on the floor to get to the next. I knew the sickest baby from Friday had died over the weekend, a convulsing 1-month-old whose LP looked clear, but whose pneumonia was severe. I went straight to the other tiny-tiny, a 3 month old who would qualify as a low-birth-weight newborn, literally a starving baby. She had actually put on a sliver of weight and brightened up. From there I went to the three tables in the front by the window into the nursing-station room. These tables have a wipe-able surface and poles to hang IV's, so they are the preferred location for those needing blood transfusions, oxygen, IV fluid drips. The closest thing we have to intensive care. The first three kids I saw there were ALL UNCONSCIOUS. Two were actively convulsing with positive malaria tests and the third was pretty limp. The next two were not much better, a very anaemic child with sickle cell (and malaria) and a malarial child with a bad pneumonia. All were between the ages of 1 and 5 years.  5/6 had positive malaria tests, though 3 of those also had other significant problems. Over the next half hour or so Dr. Isaiah also joined, and three different nurses bustled. They got Kilifi-protocol septic shock isotonic dextrose-containing fluids, they got doses of the very effective artesunate and of our strongest antibiotic, I did an LP on the lone child who did NOT have malaria and while the pressure was high the fluid was crystal clear, the seizing children got correct doses of valium, the one with the worst lungs qualified for the single oxygen tank. All things considered, we attacked the situation to our maximum capacity then turned our attention to the crazy ward. 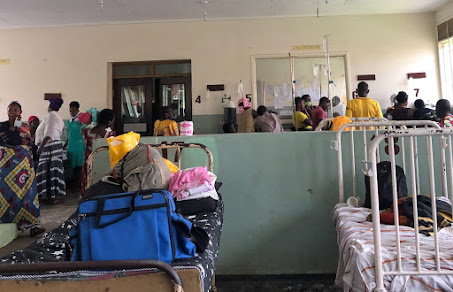 Chicken pox that should have been isolated but was not. More malaria. More sickle cell. A child with an ankle injury and a hundred little nicks in the skin for rubbing in traditional herbs. A preteen with unexplained liver failure. Another with probably leukemia. A 1-month-old who just showed up with what seems to be an omphalocele, a congenital anomaly that one does not generally just ignore for a month. Hungry kids. Irritable kids. Wheezing and coughing kids. Vomiting kids. Pale kids. A call to the lab, the blood bank is empty. At one point I got a call from Scott--he was taking a mom with cord prolapse (NOT COMPATIBLE SITH SURVIVAL of the baby if the umbilical cord comes out before that baby's head is delivered) for an emergency C-section and wondered if I could run over to the operating theatre in case Kacie needed extra hands to help resuscitate.  He said, ten minutes. I came in 12, then couldn't find a gown. No worries, Scott as surgeon didn't have one either, just scrubs and an apron, and he was still prepping (after providing the drugs, the gloves, and the sutures to get the case rolling . . . ). As he finished laying down the sterile drapes and said a prayer, he told the anaesthetist, I'm starting, and she said OK. We all noticed the mom seemed quite alert. Scott pinched her skin and she jumped. We all looked at the anaesthetist who said, the power is off so there's no monitor and my pulse ox battery is dead so I couldn't give the ketamine. I honestly don't know what she meant by her "OK". I found my pocket pulse ox in my bag, confirmed the mom had normal vital signs, and she pushed the drugs. A few minutes later Scott pulled out a blue little girl, who did not move. But she had a decent pulse, and Kacie knows what she's doing, and by five minutes she was pinkish and whimpering some cries. The baby I mean. Kacie was teaching a younger nurse-midwife how to "help babies breathe" as she went on. It was a great save, and the kind of moment that keeps us all going.

HOWEVER, when I walked back to take up the chart of the next child I had left on the ward, I could vaguely hear what sounded like an adult woman softly crying. I tried to get back up to the front (by tried, I mean, had to gently move and cajole people out of the way to squeeze between those tables) where one nurse was intently staring at a pulse ox on the hand of a baby who did not seem to be moving. I said, is this child alive? He said, yes, but when I checked for a pulse, there was none. I grabbed our grimy bag-valve-mask and started CPR. I It was good CPR too, with chest rises on breaths and compressions on heart-pumps. I asked for epi and he disappeared to look, and came back empty handed. None. We continued for a few minutes but the little boy's pupils didn't ever react and I knew he was gone long before I had returned from the operating theatre. When I said so, the mom literally fell into my arms. I was holding her up, people were wailing, it was chaos in a crowd, when the nurse said, the other one on this table doesn't look good either. I tried to comfort the mother, said a few words about Jesus, and then handed her over to a relative as we squeezed full-body-contact past each other so I could reach the second of the three unconscious kids. This one was quite febrile, so the dad kept touching the skin and feeling reassured. The nurse was again trying to read a pulse ox, but again when I checked, there was no pulse. Once again we did CPR for a few minutes, once again the pupils were already blown. Once again the sad finality dawned on the relatives and people began wailing and falling on the floor. Once again I disconnected the IV and helped wrap the little body.

Two deaths at the same time, on the same table, with the general cacophony of grief. . . and no one but me had made the decisions this morning on these two. I had interviewed, examined, poked and prodded, seen that meds and fluids were given. They were obviously very very sick. But it was so discouraging to feel that even trying to do everything right was of no avail. Did I make things worse? Or just delay the inevitable by a couple hours? It is a very physical process, pushing hard on the sternum, holding the rubber bag and mask, touching the skin and peering into the eyes with a phone light, listening for any sound of change on the chest, smelling the skin-to-skin sweat and tears of the family all around me, hugging and holding and wrapping and lifting. And then suddenly, the mourners have carried the bodies out and the rounds must go on, there are still live children to see, no time really to feel sad.

A baby who would have died lived thanks to a fast (ish) C-section under non-optimal circumstances; two pretty normal, growing, previously healthy kids age 1 and 5 died after brief overwhelming brain-affecting infections.

And a couple hundred other people waited to be seen, heard, paid attention to, cared for. 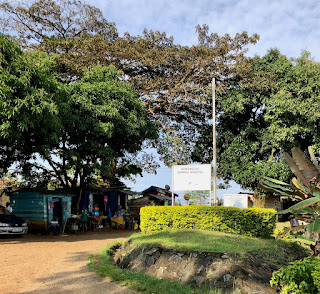 There are so many big, important things happening in the world today. But I am left thinking about small hands and beads of sweat on little foreheads and twitching limbs and vacant stares. And the miracle it is that anyone grows up, navigates the pathogens and meets their second and third decade alive.

God have mercy! Ruth in Haiti

In the Lord your labour is not in vain! Praying for wisdom, stamina, grace and encouragement for you and Scott. Jan in SS