A Season of Thanks in a World of Hate: 3 ways to live at the fray

In about two hours, our Thanksgiving officially begins.  Dinner is in the oven, the table is set, the woodstove is cranking out heat, and Spotify is churning out our Tuesday discovery playlist as the full moon shines down on deer in the meadow.  So so so so much to be thankful for.  That I have 3 kids and 3 parents and numerous other friends and relatives all en route to this spot.  That I just had a notice from the American Board of Pediatrics that I passed my Board exam.  Good until 2025.  That we work with creative courageous young people who have held on this year in the wake of so many losses, and that God decided to gently (dramatically) end the year with some major support coming in for Christ School through friends of one of them.  That our friends in Mundri, South Sudan are returning home after a church-brokered local peace agreement stopped the cycle of violence between the army and the population.  That even though Caleb is far from us, he climbed the highest mountain in North Africa with a classmate last weekend, and I know how much that means to his soul, and his knee.  And an RVA classmate visited the week before, which is a rare and valuable connection to his past.  That we have this house courtesy of my dad's foresight and love, and that we have each other to make the house a home.  That a tenuous status quo holds in Burundi, and university students are taking exams.  That we have teachers applying to go teach our missionary kids in East and Central Africa.  That a young man, an orphan whom we partially sponsor in medical school turns 27 tomorrow, and he's the kind of humble joyful believer that the Kingdom needs.  This is all in the last day or so.  I could go on and on. 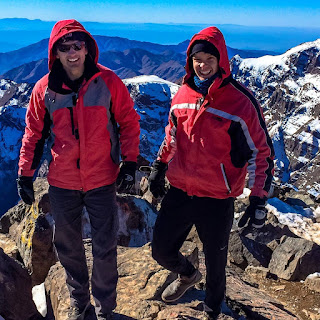 The Psalms call upon us to give thanks, to recognize and remember the goodness of God and the RULE of God.  This is the week the Church of England celebrates Christ as King, with passages from Isaiah and Revelation.  Heady words, where the rivers clap their hands, the hills sing, where angels blow trumpets over seas of glass. Yet when these words were written, the evidence of Christ's rule was slight.  The people who sang these Psalms were overthrown and persecuted.  The people who thirstily drank in the prophecies longed for deliverance.  Jesus came, but refused a tangible earthly throne.

How can we bring the threads of thankfulness and God's rule into focus when we live in the tattered fray of Paris and Mali and Tunisia, when just as Ebola seemed to have fizzled out a 15-year-old boy dies of the disease in Liberia today?

First, by looking for God in the details.  There are always kindnesses that bear God's signature, if we have eyes to see.  Ways that tragedy is laced with heroism and sacrifice.  Answers to specific prayers, like the many that came to mind in my first paragraph.

And second, by looking for God in the big sweeping picture of redemption.  Are droves of people leaving closed countries and running into the arms of nations where Christ can be openly proclaimed?  I've read a couple of pieces asking if this isn't more important than our safety and convenience.


And lastly, in between that near and far focus, by looking for God in the community around our holiday tables.  One of our Sergers working with immigrant populations in a large European city writes of their upcoming feast:  "  Men and women from every tongue, tribe, and nation sit across the table from each other.  Some UNbelievers, some belongers, some believers: (People of many world religions) getting to know and enjoy one another.  What is the answer to fear?  A community of people who love Jesus, who are learning to love one another who know they belong to a kingdom that cannot be shaken. A community that reaches out and welcomes the poor and the needy from every tongue, tribe, and nation.  Join me in giving thanks." She shows us that even when the chaos of our world seems to be a far cry from the wholesome rule of Jesus, and fear grabs our hearts and tempts us to become territorial and self-protective and insular, something as simple as a shared meal with those in need can be a taste of the New Heavens and New Earth.    Let our Thanksgiving tables be a dim picture that whets our appetite for the real feast of Isaiah 25:

Therefore strong peoples will glorify you;
cities of ruthless nations will fear you.
For you have been a stronghold to the poor,
a stronghold to the needy in his distress,
a shelter from the storm and a shade from the heat;
. . you subdue the noise of the foreigners as the heat by the shade of a cloud,
so the song of the ruthless is put down.
On this mountain the LORD of hosts will make for all peoples
a feast of rich food, a feast of well-aged wine,
of rich food full of marrow, of aged wine well refined.
And he will swallow up on this mountain the covering that is cast over all peoples,
The veil that is spread over all nations.
He will swallow up death forever;
and the Lord GOD will wipe away tears from all faces . .