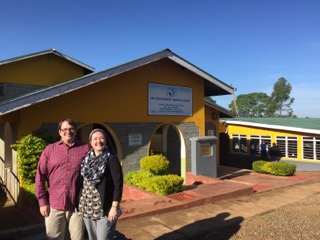 Litein Hospital began as a western Kenyan AIM mission outpost amongst the Kipsigis people in 1924, with a slowly growing medical and community health ministry since 1932.  We were invited to visit with potential new missionaries, and I have to say the visit was extremely encouraging.  Pictured above, the old hospital which is now a training school for nurses and lab technicians.

Here are a dozen reasons that we would like to see a new Serge team in Litein: 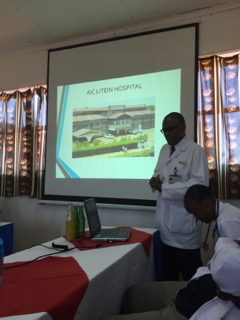 1.  A long faithful track record by senior Kenyan staff.  Dr. Munala, the medical director, came in 1990.  26 years later, he's presenting the new Vision and Mission statements to us, with a strategic plan for growth.  The Hospital Director has been working persistently since 1979.  But these men aren't done.  They are dreaming big. 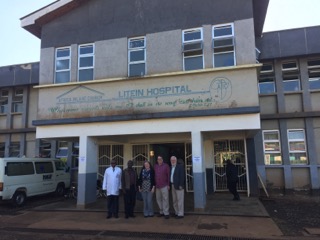 2.  In the 15 years since missionaries were last involved, the Kenyans built a brand new 150-bed modernized hospital.  To serve their own people better.  They aren't waiting for others to do things for them.  This is a place where true partnership is possible. 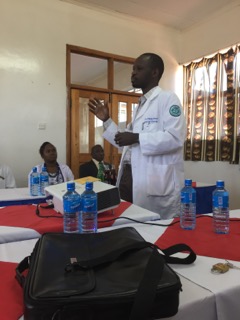 3.  This year, they hired a newly-trained PAACS surgeon (the Christian surgery training program that Kijabe and Tenwek participate in).  Dr. Blasto inspired us with his passion for teaching and excellence.  He wants to pour into the younger trainees in the same way he was mentored by missionaries.  He's a leader we would love to work with. 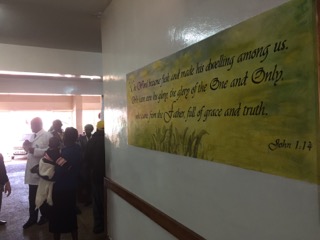 4.  A strong foundation of compassion and commitment.  The spirit here was palpably different than we've seen in many places.  These people take Jesus' words seriously.  One of their core values is to NOT TURN ANY PATIENT AWAY, based on John 6:37 (All that the Father gives me will come to me, and whoever comes to me I will never cast out). 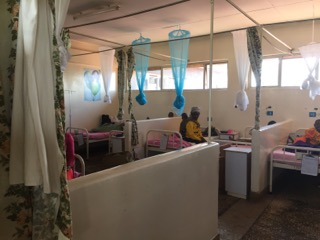 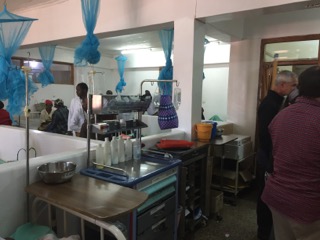 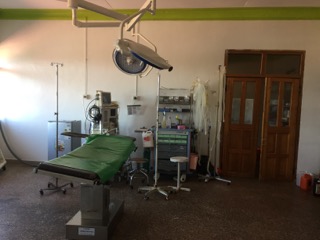 5.  Bright, ventilated, well-maintained spaces.  The new building has been used for about 7 years now, and we liked the design of the wards, the cleanliness and openness.  Also if you look closely, there are VITAL SIGN charts on the beds, with actual vital signs recorded.  The theatres are spiff, and thanks to one of the Kijabe-trained Nurse Anesthetists who went out and asked and advocated, they have some good equipment. 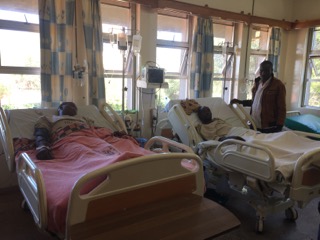 6.  Boldness to push the limits.  This HDU (high dependency unit)  has two monitored beds, oxygen, even a simple ventilator.  The man under the pink blanket had been saved by an emergency thoracotomy (open the chest) surgery the night before, when he came in with an arrow sticking out of his chest.  The tip went right into his left ventricle.  Most places he would have died.  But he was recovering well, thanks to quick surgical care. 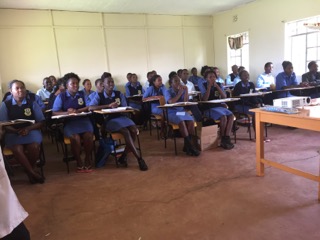 7.  Opportunities to teach.  This is a class of nursing students.  There are 7 Medical Officer Interns (just finished med school, so young doctors) and 10 Clinical Officer interns (equivalent of PA).  The vision is to place two Family Medicine Residents here as well.  As the interns introduced themselves, over and over they asked for teachers to come and work with them.  They want to become good doctors. 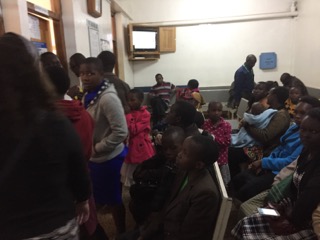 8.  Medical needs.  The hospital was bustling.  We saw full wards, patients waiting to be seen, education going on, immunizations being given, specialty services like dental and ophthalmology.  Nearby government facilities refer to Litein.  There is a long history of community involvement and outreach, so the patients know and trust the place. 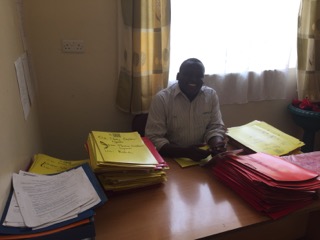 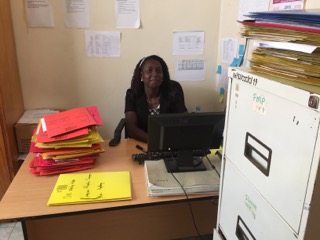 9.  Wisdom and innovation.  These two run the OVC (orphans and vulnerable children) program.  Instead of collecting more kids into the nearby orphanage, they monitor them within their extended family, providing nutrition, school fees, psychosocial support.  This is great, evidence-based, truly helpful care.  Next door on this hallway there is a nurse doing a study on the impact that ARV's are having on quality of life for people living with AIDS. 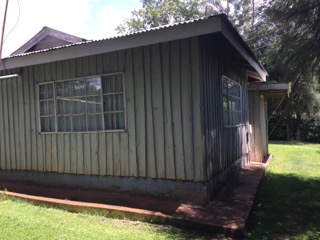 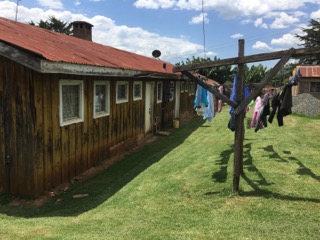 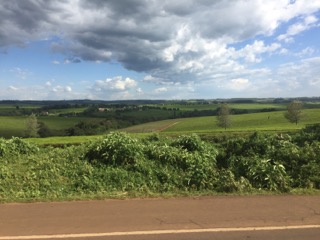 10.  Climate and community.  Though the housing hasn't had an upgrade since the 1940's . . . there is space and will to do so.  The elevation means pleasant days and cool nights, surrounded by rolling green hills and tea fields.  It's a moderate town in a rural area, but accessible to Nakuru (where there is a Java house and shopping). 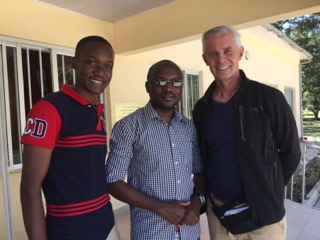 11.  Broader East/Central Africa impact.  Here Scott talks to Gad from Burundi and Musa from Eastern Congo, two of the poorest and least healthy places on earth.  The residents who will train at Litein are not just from Kenya, but from even needier places. 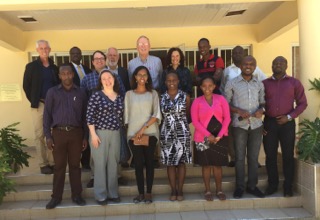 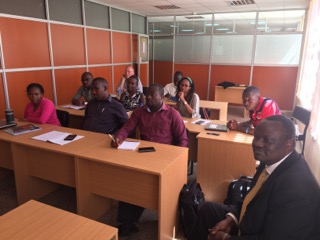 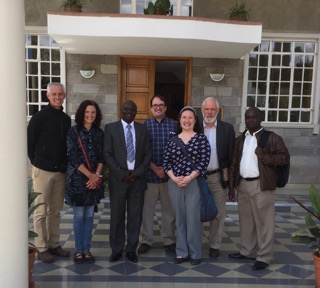 12.  Being part of the future of medicine in Africa.  Less than a quarter of medical school graduates have the opportunity for training beyond internship.  Yet only a year of internship, much of that in places poorly equipped for supervision, does not adequately prepare doctors for the breadth and depth of skill they need.  The Kabarak Family Medicine Residency is a pioneer effort to give young doctors four more years of intensive education and supervision, so they will be equipped to handle the majority of medical care (broad hospitalists), have a solid foundation in discipleship as servant-leaders, and gain a holistic view of working with people and communities.  Right now our teams in Kijabe and Chogoria are part of this program, but we need more clinical sites.  Litein seems ideal.

Though there are many logical reasons this makes sense, we ask you to pray for God's leading.  Particularly for the young couple who visited with us, for clarity.  And for team mates if they are to come.  We do see some of those fingerprints of God as we look forward.  As we drove in, it dawned on me that I had prayed for Litein because former OPC missionaries Lois Ooms and Dr. Griet Rietkerk worked there for a period of time.  Dr. Rietkerk was the woman whose talk to my church's Pioneer Girls group when I was 8, about medical missions in Eritrea and Kenya, God used to grab my own heart.  So in realising that this was a place she had worked, and meeting some of those she had worked with, more than 4 decades later . . . well, we sensed God's smile.

We could use primary school teachers, family medicine doctors, nursing professors, pastor/chaplains, OB/GYN's, hospital administration or resource-mobilization types.  Give us a message if this post stirs your interest.
Posted by DrsMyhre at 12:46 PM

Hello Dr. Myhre,
My name is Sarah Anikpo. I stumbled on your blog and have read all posts from this one moving forward. You mentioned OPC in this post. Are you referring to the Orthodox Presbyterian Church? I am a member in MM, but was raised at Bethlehem Baptist in Mpls under Pastor John Piper. Are you familiar with him? I am a PA-C with a history of short-term medical missions to Uganda, Kenya, Ethiopia & Pakistan. I am now Mom to 3 young children and practicing 2 days/week in OP psych. My Mom is a retired NICU nurse. You can see why your ministry, through your blog, has captivated me. My husband is from Côte d'Ivoire. My dearest friend moved to Kampala in Nov. They are new missionaries with EMI, although her husband was raised in Kenya and attended RVA.
I'd love to know if you have a childhood connection to the OPC and also get info regarding how to financially support and pray for you and your husband. Also, how was "Serge" started. May God continue to richly bless your heart and your work in Kenya.
In Christ,
Sarah Anikpo

Dear Sarah- Great to meet you. The couple in this post who were visiting back in the Fall just got approved to move to Litein with Serge. You can get our bio and giving info here: https://www.serge.org/staff/id-50134/ . Feel free to write me at jmyhre(at)serge(dot)org; if you send me your email I will add you to our mailing list (we send out a mailchimp letter every few weeks, sometimes more often if we're desperate). It sounds like we have a lot of cross-over! Who is your friend moving to Kampala with EMI? Some of our missionaries are helping with the next EMI training. Briefly, yes, I was raised at Grace Orthodox Presbyterian Church and they are our #1 supporters. Serge was founded by an OPC pastor who was teaching at Westminster after neither the OPC or PCA were willing to go into Uganda post-Amin. His name was Jack Miller. Thanks for your short term work and be in touch if you decide to move back to Africa. Jennifer