Wednesday saw the culmination of the boys' football season for secondary schools in Bundibugyo district.  A quick week of group play, play-offs, and quarter finals had whittled the field down to 4 teams from the 23 secondary schools serving this area of 250,000 people. The plan was to play both semi-finals in the morning at Christ School, then the finals in the afternoon a half-mile up the road at St. Mary's Simbiya.  One team for the first semi-final showed up 4 hours late, so the second semi proceeded first. CSB won that one 4-1, back on stride, playing like a team. The second semi was won by St. Mary's Simbiya, meaning we would all troop up the road to their home field for the final. This is a school that has, for two decades, used intimidation and violence to express their desire to win. Still, we all had hopes that the veneer of organization and the growing skills, equality, collaboration would win the day. 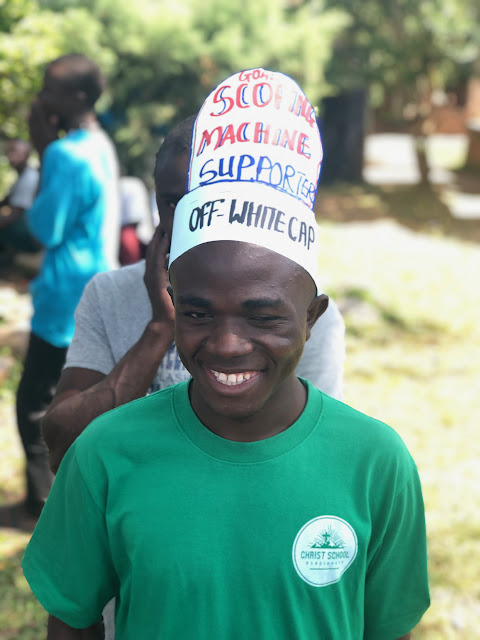 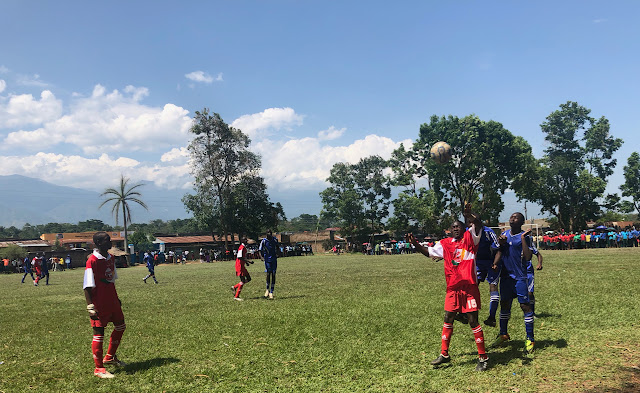 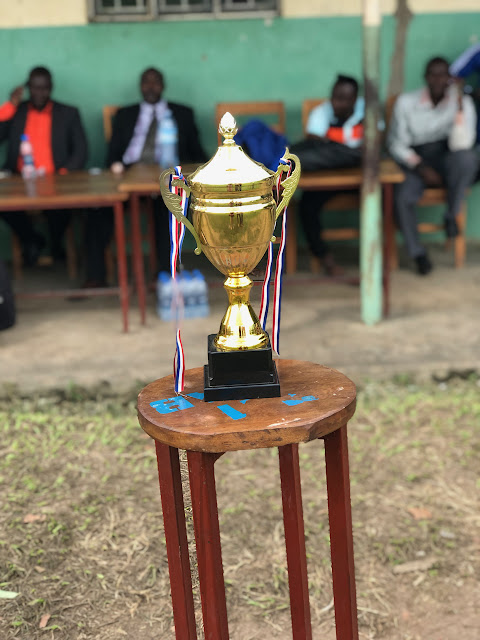 The final match started after 5 pm. CSB students gathered in a group near one of the goals with their incessantly loud vuvuzelas and a handful of hovering staff to keep order. We were near the center field, dutifully behind roped lines with 4 apprentices (one with strong ear drums elected to hang with the student group), cheering and craning to see the plays as more and more people seeped under and around ropes right up onto the lines of the field. Our head teacher had brought UPDF (army) and police for security. There were officials from the district, from the sports committee, from the Coca-Cola sponsors of the national tournament overseeing fairness at the district level. The first half ended 0-0, which was a reasonable outcome as the teams are pretty evenly matched and the officiating quirks were pretty evenly spread. Simbiya students ran the perimeter of the pitch wrapped traditionally in vines and leaves, chanting. Our students huddled in their area blowing their horns. Another thousand people smashed around the field and into the road. A couple of disinhibited men under the influence said rude things.  In other words, kind of normal. 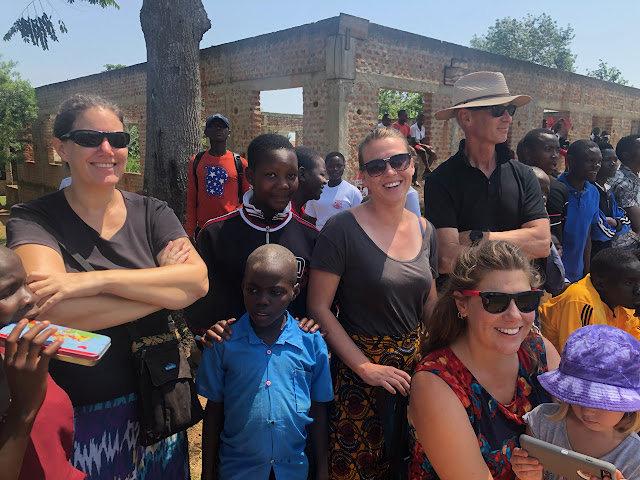 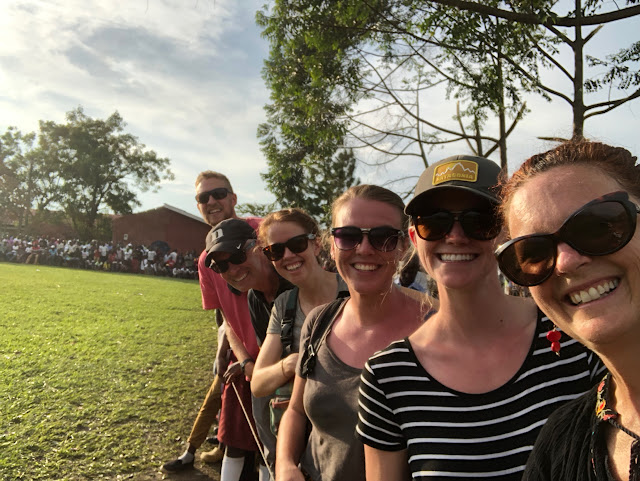 However, after the half-time break, the Simbiya coach and another Simbiya teacher/administrator came out blazing.  As the teams lined up to begin, these two men were shouting loudly in the faces of the onlookers and the officials, claiming that "the bajungu have paid off the referees".  We were five feet away as this hateful angry speech about us was being used to rile the crowds. The uproar delayed the game another 15 minutes or so, with the police saying "just let the kids play, this is their match, stop ruining it" and who knows what the officials were saying. Finally these two men stopped shouting and we began, but the atmosphere was now very tense. 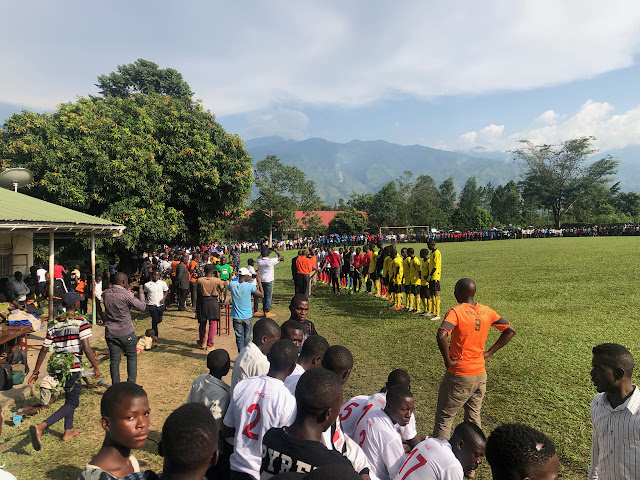 About 15 minutes into the second half, the refs called a foul on Simbiya at about mid-field and gave us a free kick. Our boys played that masterfully and converted it into a goal, the first score of the game. Our students erupted in joy, running onto the pitch and then back over the end line as has happened with every goal in the entire week of the tournament on every side. As they returned, the Simbiya keeper grabbed ?one or two of the CSB girls, and a CSB female teacher Madame Pamela intervened.  She got between the irate goal-keeper and the students.  So the goal-keeper punched Madame Pamela in the face. Bleeding copiously, she was then rushed off the field in the midst of pandemonium.

I ran with Pamela and a student to get out of the crowd and seek help, followed by a the Coca-Cola rep who very helpfully was a head taller than everyone around, very strong, and had a car.  A quick exam of Pamela did not show any lacerations, just a profusely bleeding nose, but she was so shaken and the Coca-Cola organizer really wanted to get out of Dodge so we got in his car to take her to a clinic, blood on our hands trying not to ruin his seats. He had to jump back out numerous times to push rioting students off the vehicle to get out of the gate. We finally made it to the road and sped to Nyahuka where the clinic was manned by one of our old friends and colleagues, who kindly and professionally administered first aid and let us wash off our bloody hands.  I walked Pamela back to the safety of Christ School then proceeded back up the road on foot alone.  I suspect the Coca-Cola guy had fled the district, I never saw him again. 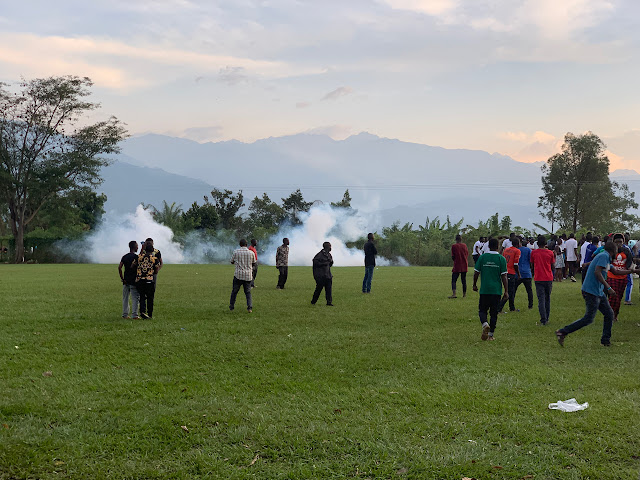 Meanwhile at Simbiya, things went from bad to worse. While we were fighting the melee to get out of the gate in the car, Simbiya scored an equalizer, upon which the field was overtaken by the crowd and the referees feared for their lives.  They abandoned the game, pulling off their uniforms to blend in. Scott gathered the apprentices, Ken the headteacher had all the CSB team and students sit in one spot surrounded by army. The army fired off five tear gas cannisters and fired shots into the air to disperse the crowd. People trampled the fence down into the road to get away from the tear gas. CSB students were coughing and crying. The CSB group stood to march out with the army escort, as Simbiya students threw stones at them. All the way down the road CSB students were falling down overcome by the tear gas, looking for water to wash burning faces, protecting themselves with arms and clothes. Army were chasing ambushes by rock-throwers.  Staff were trying to keep the students together. Scott felt like someone was going to get killed.

But no one did.  There was rock-throwing into the CSB compound into the night, there was increased awareness and security, but a heavy rain dampened tempers and the night passed without further trouble. And in the light of day, we're all wondering, WHAT WAS THAT???  Just rowdy enthusiasm for a game, a craving for victory, an assumption that any score against your team is illegal? Was it the natural consequence of rampant indiscipline amongst restless young men with too much alcohol and time on their hands? Was it simmering rivalry seeking an outburst? Or something deeper?

Are we doing anything that exacerbates the tension? Yes, just be being here and being different, we are DISRUPTIVE. Christ School gives scholarships based on need and potential, not family/political connection. That sends a ripple through the system. Christ School does not tolerate teachers trading grades for sex, or beating students, or holding multiple jobs and never showing up for class, or bowing to the chaos of disgruntled teens, or cheating by smuggling test answers to students.  That disrupts the way things usually run. Christ School asks for accountability, not popular.  But are we doing other things that disrupt unnecessarily, in our attitudes, our manner of relating to the district? Are we communicating superiority or pride? I know I have that attitude and we all need prayer to not despise and judge our neighbors. 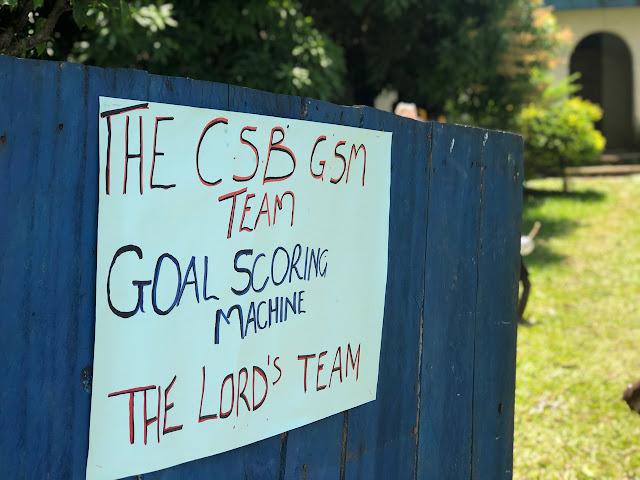 On Sunday, Desmond preached to us to love our enemies and to seek to be a blessing to this place.  Now that we've been punched, gassed, and stoned, the challenge is upon us. We hope for the district sports committee to bring consequences, because it is not merciful to allow bullies to ruin the day for children playing football. But most likely, it will all be swept under the rug and the violence will resurface. So how do we move forward in this place, trying to protect our students and do the right thing . . . but not perpetuating division, growing scorn in our own hearts and giving room to hatred in others? 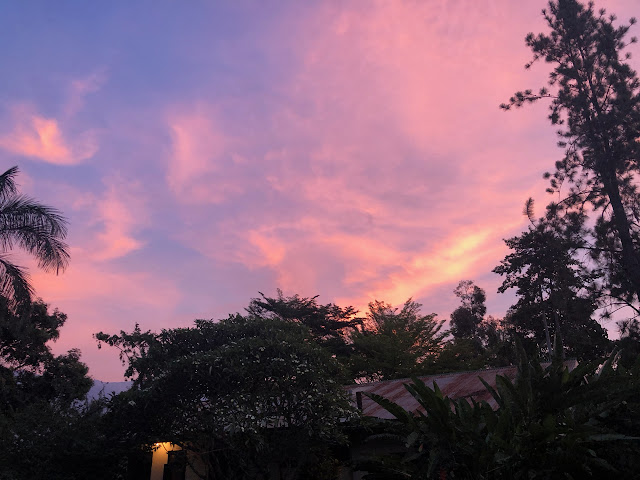