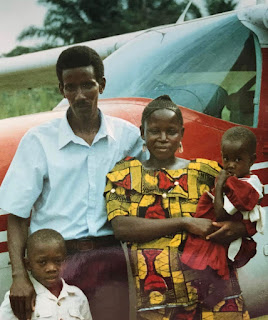 Yosefu and Rose, with Mugi and Zawadi, in the late 90's on the airstrip


"Quietly Extraordinary" was Pat's phrase to describe the life our our friend Yosefu Mutabazi, who died this past Sunday morning at the age of 61. He was born in Rwanda, but moved to Uganda with his father as a boy and went to primary school in the Masaka area.  I could not follow the whole story but something to do with a piki and getting a job brought him out to Bundibugyo, where he met and married Rose and adopted her young son Mugisa who had immigrated from Congo. They went on to have three more children together,  Zawadi Edith (nursery school/early primary teacher with son Abel),  Sam (studying physics, chemistry, and math in S5), and Katusime (an S4 candidate taking exams this year). Yosefu was one of the first men who embraced the Gospel as our team began living and working here, and has been a right hand person of World Harvest Uganda ever since. He trained pastors, helped with Bible stories and translation, worked to establish churches, developed youth programs. He managed the Books for Bundi Library and more recently worked with Laura Stewart's new NGO promoting Bible Memory for youth (Onelife 20:24).  But mostly he opened his heart to the ever-changing group of bumbling foreigners, gave us advice, listened to our questions, gently corrected our mistakes.

He was never in a hurry, never demanding, patiently deliberate, dedicated to Scripture and truth and mercy. Perhaps because he began as an outsider he was sympathetic to our neediness. After knowing him for more than two decades we found ourselves entrusting our newest missionaries into his care. I don't think any of us imagined Bundibugyo without him.

Friday during our CSB celebration, as so often happens with highs and lows, he came to see Dr. Marc having become weak and stumbled and fell the day before. His blood pressure was sky high, and Pat drove him to the local small Catholic health center near by for treatment of this newly diagnosed malignant hypertension. We all thought this was concerning but treatable. However by Saturday he had become unconscious, and in spite of heroic efforts by Marc, Pat, his family, and many friends enabling transfer to Fort Portal, he never regained consciousness and died Sunday morning. We were sadly unavailable having driven Kevin to the airport and picked up Karen . . . but returned Sunday evening to sit at his home til nearly midnight. 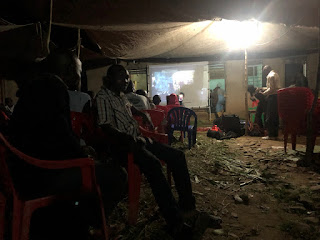 Traditionally, when someone dies, the close family sits in the house with the body (in a coffin or on a mattress) and others stay outside awaiting burial the next day. In the old days there would be drums beating all night to ward off evil. These days, we have lights hooked up, speakers for music, and in this case even the Life Ministries projector showing the Jesus film. 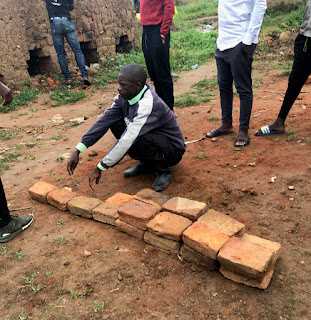 Monday morning, we were back down to sit and show our support physically, while younger men started digging the grave. Since Yosefu was a much-loved senior, his grave was lined with bricks and finished with cement. 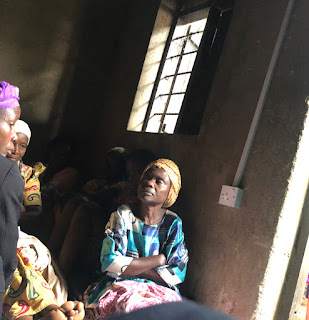 Women take turns coming into the house to sit with the wife, children, and body, sometimes singing and praying, talking or being quiet. 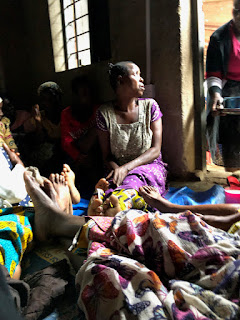 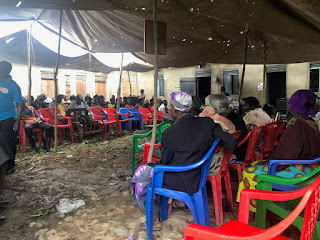 While friends comfort and youth dig, the elders organize for the funeral. Tarps propped up by poles, the sound system, many rented plastic chairs, and an ever growing crowd of people throughout the morning. 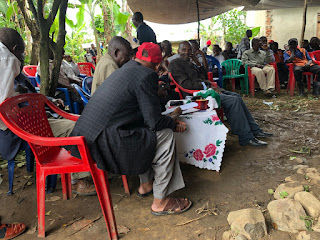 The church elders sat at this table receiving any donations to help the family, recording them in a book. 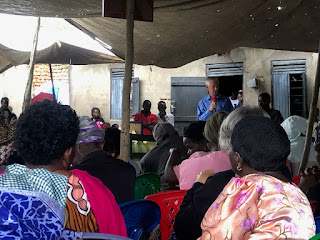 The funeral consisted of praise music, speeches, sermons, tributes, condolences, all of which went on for many hours. We collected and printed a dozen or more messages from across the world, as our missionaries recalled Yosefu's grace in their lives. Here Scott is preaching on Revelations and hope, the New Heavens and New Earth, the Kingdom on which we stake our life, using a song lyric from Andrew Peterson:
And all of the death that ever was
If you set it next to life
I believe it would barely fill a cup
'Cause I believe there's power in the blood . . .
I have to admit that lyric takes some faith here in Bundibugyo. There is a lot of death. 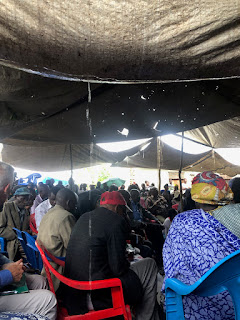 But as the rain poured down and the daylight faded, that lyric stuck with me. We were dancing in the mud, declaring death to be impotent in the face of the life God is bringing. We were remembering a man who preached this truth even as we reminded ourselves of the same truth in our grief. If our theology does not survive a leaking tarp on plastic chairs next to a fresh grave, with bereaved kids all around, then it is not worth embracing.

By dark, we were ankle deep in heavy mud and rain, the coffin was in the ground, and people were dispersing quietly home.

The final tradition is held 4 days later, which was this morning, and symbolically the tools of burial are to be washed that day and a large amount of food prepared. Everyone returns to sit under the tarps a final time and eat a plate of food. This symbolizes peace with the spirit of the person who has died. After that, the family is free to leave the home and start re-assembling their life.

We know we will see Yosefu in eternity, with his ready smile and loping gate, probably surrounded by small children who felt the warmth of being in his orbit. Please remember his family in your prayers.

I'm so sad for his family's and the community's loss. Your week has been full of extremes. Thank you for sharing with explanations. It is valuable cross cultural insight.

It seems this quote by Thomas Merton is fitting. I've thought about it a lot lately. What victory there is in a Christian's demise on earth.
"It is the very essence of Christianity to face suffering and either not because they are good, not because they have meaning, but because the resurrection of Jesus has robbed them of their meaning." -Thomas Merton