Of sacred wounds and shining wonders: COVID-19 day 183 in Uganda

Ministry can indeed be a witness to the living truth that the wound, which causes us to suffer now, will be revealed to us later as the place where God intimated [God’s] new creation. —Henri J. M. Nouwen (1932–1996) 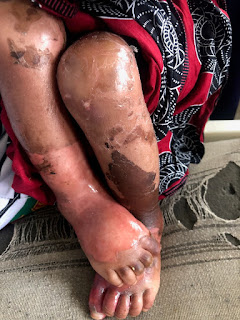 Same skin that was broken be the same skin takin' over. . .

Most things out of focus, view

But when you're in the room, they notice you (Notice you)

Them men, them gon' fall in love with you and all of your glory

Your skin is not only dark, it shines and it tells your story -- Beyonce, Brown Skin Girl 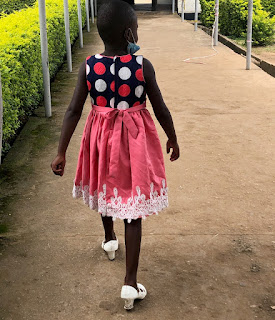 shining but not escaping

This morning we worked in our garden. The weeks are long. Most days begin before sunrise and work ends well after sunset, a stretch of  malaria and fever that seems to never end, meetings, calls, emails, prayer. So it is a gift to have a morning for a walk with the dogs, a cup of coffee, and a chance to hoe and crumble the composted dirt into rows for the next wave of planting.

The wound in the earth, the broken surface, becomes the place of newly created goodness. 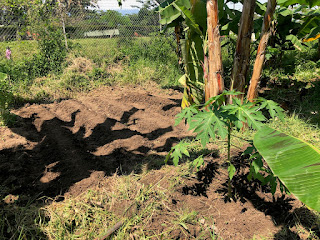 The new rows, with papaya and banana looking on

COVID-19 for one. I have sticky-notes for prayer for people we know who have been infected, so far all recovered. 30 million stories, and for nearly 1 million (198,000 or 1/5 of those in the USA) the story has ended in death. Here in East Africa, we've been bracing for six months, yet the pandemic has not come with the ferocity of Wuhan or NYC. So far so good, or not. While coronavirus spread and death has not overwhelmed Africa (? some combination of younger populations/older people already dead, less travel exposure, previous similar rainforest miasmas breeding similar virae with some unknown immunity, early strict lockdowns, prayer and mercy, no one knows for sure), the global impact will be felt here for many years. The USA pulling out of the WHO; less investment in TB, malaria, AIDS, malnutrition; less access to a new vaccine; less income from tourism; school closures resulting in an epidemic of teen pregnancy; the world tending to turn inward and self-protective in the face of hardship; the list is long. After decades where child survival has improved, this new decade may look very bleak. 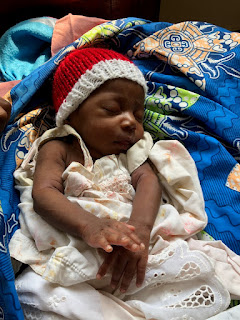 Is there any wound that cannot become the place of new beauty?

African American spirituality was forged in the fiery furnace of slavery in the United States. The ore was African in origin, in worldview, in culture, and in traditions. The coals were laid in the bowels of ships named, ironically, after Jesus and the Christian virtues, which carried untold numbers of Africans to the Americas. The fire was stoked on the “seasoning” islands of the Caribbean or the “breeding” plantations of the South where men, women, and children of Africa were systematically and efficiently reduced to beasts of burden and items of private property. Yet those who came forth from these fires were not what they seemed. Despite the oppressive and ungodly forces applied against them, they forged a spirituality that encouraged hope and sustained faith, which enabled them to build communities of love and trust and to persevere in their persistent efforts to be the free men and women they had been created to be. . . Diana L. Hayes, Forged in the Fiery Furnace: African American Spirituality

If the history of America gives us any hope, it is found here. Injustice and oppression on a continental scale still cannot snuff out the shining lights.

We awoke this morning to the news of Ruth Bader Ginsburg's death. No one is obligated to agree with all her arguments, but we have to admire the way she found good right in the hardest places. Being a woman in our parents' generation, forging a way for equal pay and opportunity. Even just the example of standing on principle and being willing to work and work hard.

And this week's news in general has been discouraging; the hope of reunion with family recedes as vaccine development feels less certain and travel remains a mirage. Nevertheless (an important word) the truth remains that there is nothing too impossible for God to turn to good (Rom 8).

Let's take courage then. In spite of forces that distress us all, let us look for the forged gems. 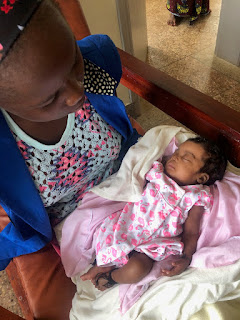 A gem, see story below

Remember the 15-year-old whose premature baby the nurse was wrapping up as a dead body? Innocent, we learned this week, in the Latin root means not-yet-wounded. I don't wish wounds on 15 year olds, or 15 day olds. But this pair returned for a check up this week. K smiled proudly as I paraded her little chub-cheeked baby around the NICU as inspiration to all the other moms of 1.2 kg strugglers: here she was weighing in at 2.52, very much alive and well. Every day we feel the weight of all that is broken, and yet see the glimpses of beauty. A mom of twins who was determined to leave the hospital, but because we do rounds and assess and talk we convinced her to stay, which allowed a transfusion to save one twin's life. A mother whose blood pressure had reached danger levels, who could be induced and rescued. Our young doctor Isaiah tracking down a missing lab result that made a diagnosis of possible leukemia, needing a referral. A school staff engaging with the Gospel in new ways as our team continues mentorship. An accusatory email trying to wound us, that required a soft answer because more important issues are at stake. A toddler with signs of starvation who came too late to be included in the day's milk distribution; yet our BundiNutrition staff took it upon himself to return to the hospital and start him on feeds. These are tiny sprouts of new creation, but significant nonetheless. Every single person around us has their own wounds, some open and some scarred, all telling a story of growing glory. 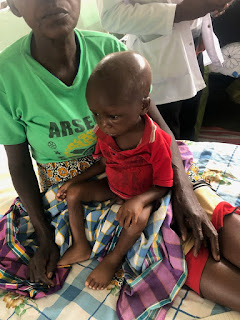 the toddler on his grandmother's lap that needed therapeutic milk

Lastly, here is a two-set album from Porter's Gate, worship music that gives a soundtrack to all the above. Listen to "O Sacred Neck", which talks about wounds and glory.

So good! Thank you! Ruth in Haiti