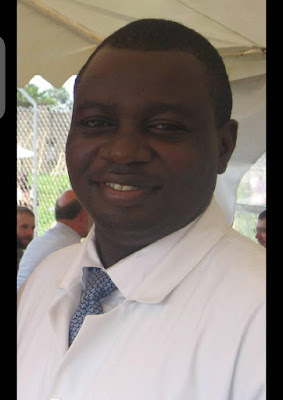 On the 4th of December 2007, we were in this very place, surrounded by epidemic, and without our kids, facing uncertainty and loss. 2020 is not the worst we have seen.

13 years ago Ebola Bundibugyo boiled up in this little pocket of the world. Dr. Jonah was in his first year post-internship, and had been examining and treating patients with Dr. Sessanga, PA Scott Will, and us, all of us lulled by the negative Ebola testing into the assumption this was a particularly bad typhoid epidemic. However, it was a new strain of hemorrhagic virus, requiring a new test, and by the time the CDC announced this discovery Nov. 29, Dr. Jonah was already shivering with fever and depleted with vomiting in Kampala where he had gone to pick his daughter Masika up from school. We put our children and team on small planes on the grass airstrip to evacuate them from the risk of being near us if we also succumbed, and tried to keep on responding to the epidemic as larger organisations arrived to help. Dr. Sessanga also fell ill with Ebola, and Scott went to his home to check on him. On Dec 4th we received the stunning, unbelievable phone call from  Jonah's brother: he was dead.  Within a day, the toll for Bundibugyo health workers climbed, and five from the hospital died. We buried four of them in a memorial plot at the hospital together, only a few of us attending, the whole district blanketed by fear and grief. Those days were so raw, running on adrenaline, wondering if we would all die. 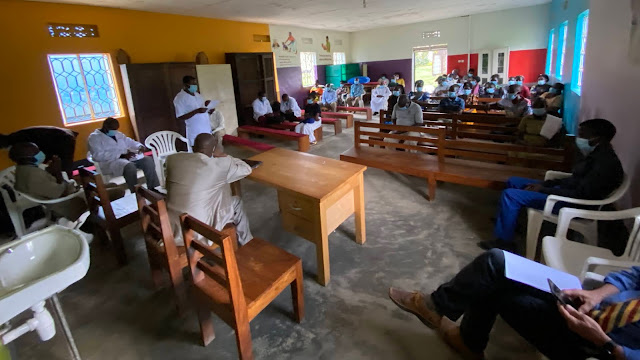 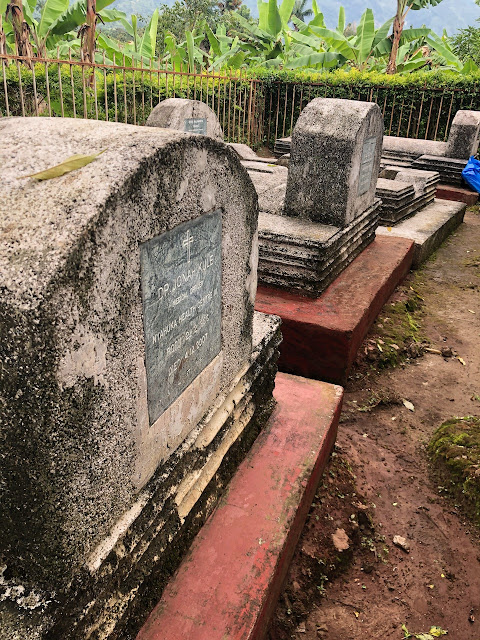 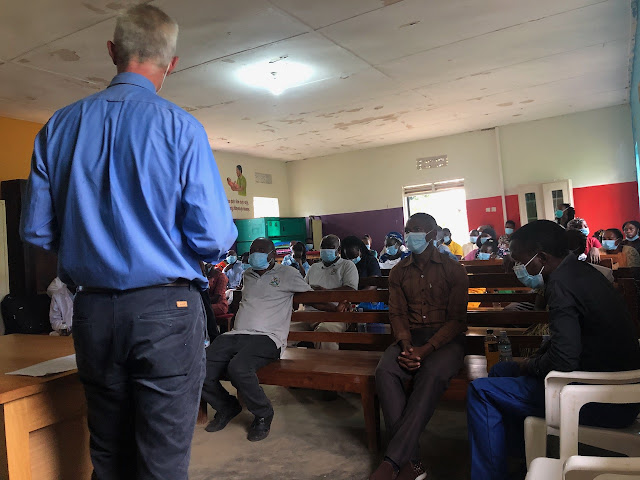 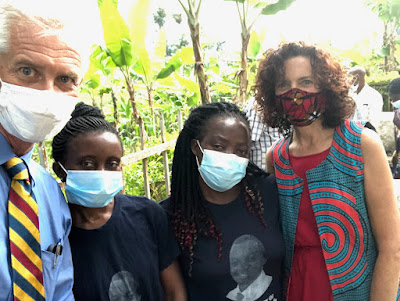 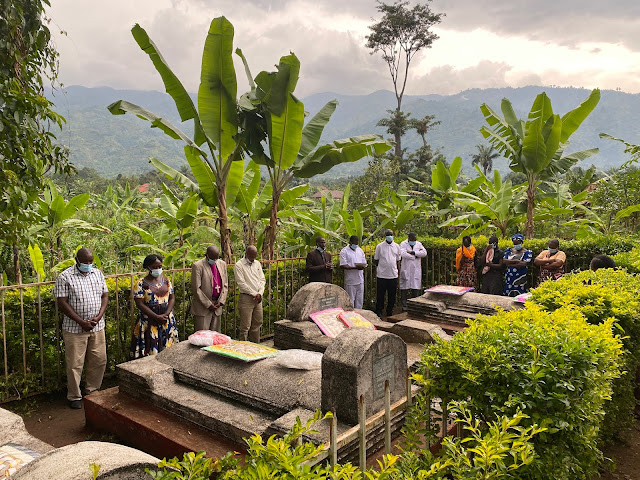 Yesterday, the hospital administrator Francis, whose mother had been the Matron (head nurse) in those days who died Dec 5th, 2007, organised a meaningful remembrance. About 60 of us gathered Friday afternoon to speak, remember, lay wreaths, pray. There were family members of the five hospital staff who died, clergy, government officials, current staff. Scott spoke about Jonah's life, his commitment to lay down his life in a very Jesus-like manner to serve his people. His final words being words of love, hoping that no one else died like he was dying. Dr. Amon, who went to medical school on scholarship thanks to the funds and programs we initiated as a mission in response to Jonah's death, spoke of the heroism of the five and enjoined current health workers to take courage. Rev. Julius who was in CSB back then and now leads the main Church of Uganda congregation in the district preached the Gospel: good news that this world is not the end, and yet a strong call to use our time in this world like Dr. Jonah Kule, Kule Joshua, Rose Bulimpikya, Asanasio Maate, and Johnson Kiiza did. It was a sober but determined tribute. 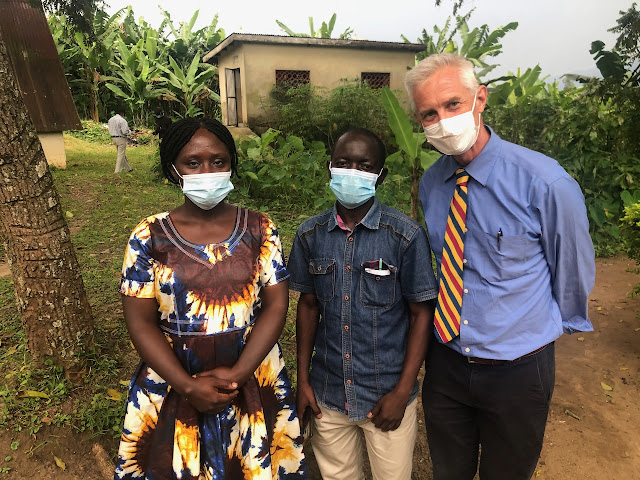 And timely, as cases of Covid-19 climb, as deaths continue. Working in a hospital is draining in the best of times. In rural Uganda, it is often an experience of reaching one's limits, stepping over too many patients lining halls and floors, finding IV's out and medicine stocks "finished", surgery delayed for lack of a pair of gloves, babies dying after hours because the power went out cutting the oxygen concentrator off. This week a child died in my hands as I was desperately resuscitating while the nurse ran looking for supplies, alternating breaths and compressions alone, with a mother screaming and writhing and a crowd of onlookers. Malaria, which is up 42% since 2018 due to the heavy rains, has taken a huge toll here. Africa loses twice as many people to malaria in a year as North America has to COVID-19. This week Scott cared for a mother pregnant with twins . . . who had lost FOUR CHILDREN in last December's flood, when they were simply swept away but the landslide of rocks and water. We shore up IV tubing for blood transfusions, or antibiotics for meningitis, or locally made food supplements for malnourished kids.  Wednesday I admitted the infant of the woman who died almost a month ago with post-CS bleeding and shock, from eclampsia. She was starving. 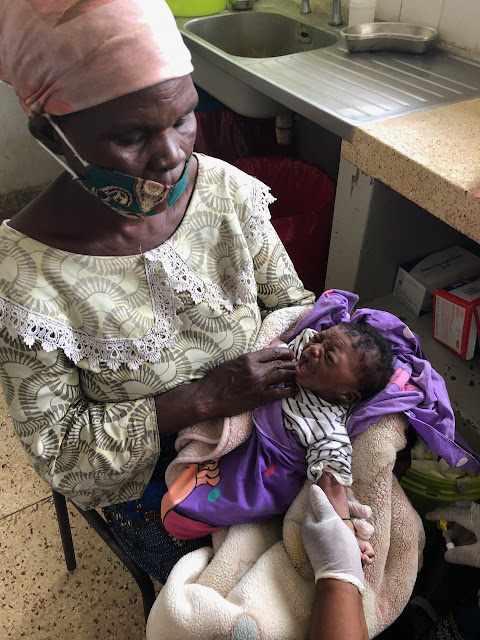 Baby M.O. expressing her hungry unhappiness. Pray for her grandmother who is trying to feed her.

This blog has been hard to write lately. I was sick, which turned out to be a minor URI but it took 9 days to get the negative COVID test back, and in the interim I kept entering the sea of viral goop with my N-95 mask and hand sanitiser to keep trying to minimize harm from all the above, which actually cost us some trust and misunderstanding. We planned and led a 3-day team retreat over Thanksgiving Weekend, as safely as possible with our "bubble" of 14 adults and 13 kids from Bundibugyo and Fort Portal. Our theme came from Zechariah, tied to Advent, which I'll write about another day. It was a needed time to connect with God and each other but also a major effort to pull off. December means end-of-year evaluations, budgets, contract renewals, school finals, bonuses, needs, asks, gifts, graduations, weddings, and funerals . . .all things that are important and additional to all the other work. We miss our kids. Our moms. It's been a lot.

So yesterday came as a gift really. Paradoxically, though we gathered to mourn, we actually came away strengthened and encouraged. Where your treasure is there your heart will be, and it is no small thing to be able to gather with people who walked through our darkest days with us, to share a joint grief, and to celebrate a joint view of how far we have come. Bundibugyo Hospital has risen from the bottom of district rankings to the top 20%; as has Christ School. Small seeds die, but grow. It really is true. A daughter of one of the other health workers remembered Scott coming to their home with food, when they were shunned and feared. Small, but bearing fruit for years. And even though we get tired of the constant sense of helpless inadequacy, angry at injustice and corruption . . . we are humbled and challenged by the example of the Bundibugyo Five who paid the ultimate price for serving others.

At our retreat, Mike preached on Sunday, and he talked about the metaphors of the vine and branches, of fruit, salt and light. Salt has stuck with me this year. Taste, yes, but as Mike said, also preservative. We are scattered, small grains in a lot of rot. And if we can slow the sorrow even a little, stop the decay even temporarily, that is enough of a calling. Sometimes presence goes a long way, in 2007 and 2020.

A little fighter in the 575 gram weight class 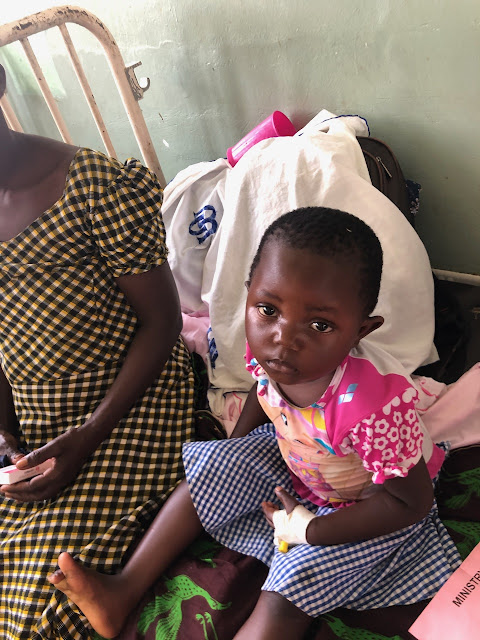 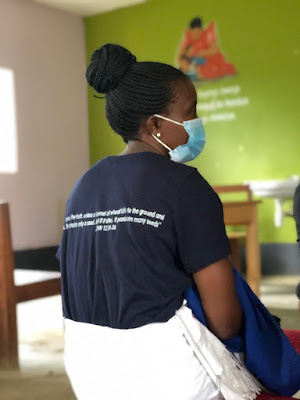 The verse Scott preached at Jonah's burial, on memorial shirts made by his family.

Addendum: at the same time I was posting this, our ED for Serge Bob Osborne wrote us an email reminding us of this article about Dr. Jonah back at the time, and sent this photo from Jonah's medical school graduation, with us and his wife Mellen. 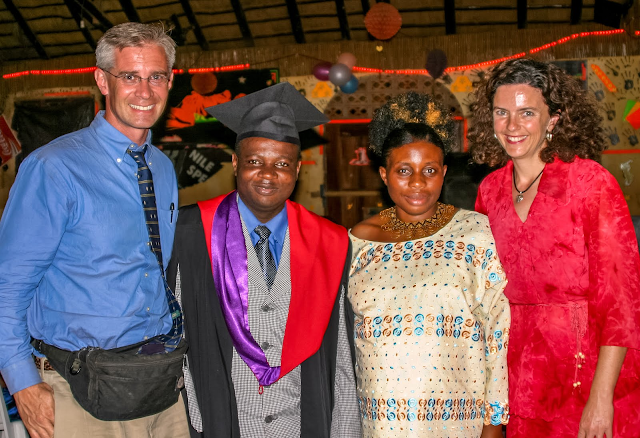 Thank you for this. Praying for you in Haiti.