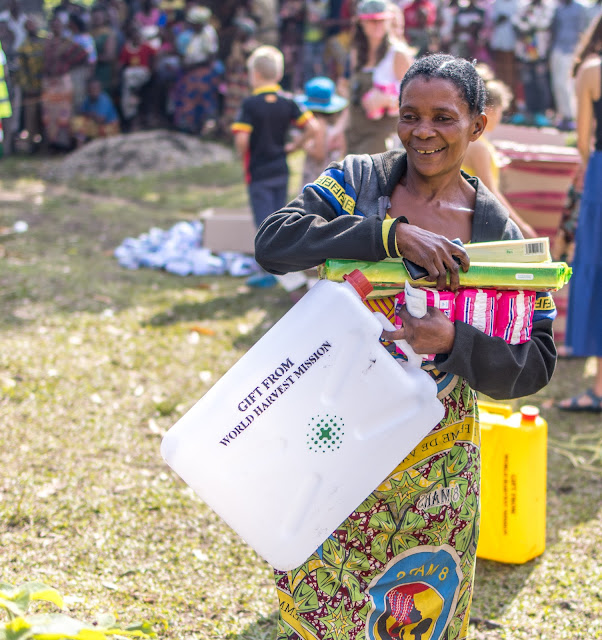 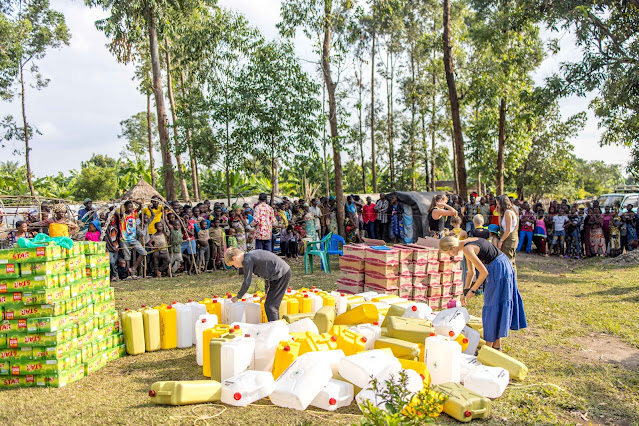 We once fled from war, on foot, and were thrown on the mercy of others. So when Scott gets called to District meetings about people who have migrated temporarily into Uganda from Congo, uprooted by a conflict that simmers and flares between the same group that sent us running (the ADF) and the same militaries that helped us return (UPDF and FARDC), he goes and listens and advocates for that same mercy. It's a complicated situation, with local, regional, and international implications. Aid can be a means of good, or a long-term harm, if it is not applied fairly and thoughtfully. We need to respect both the Congolese desperate and their similarly-stressed Ugandan hosts. This week there was a news story of a distantly foreign ADF commander killed only miles from our border . . . but also Red Cross concern that some of the 29,000 "persons of concern" they estimate to be staying in hastily built shelters, with relatives or on church or public land, are suffering from epidemic gastroenteritis. The word "cholera" was queried. Yes, the government wants them to register and move to officially gazetted refugee camps. No, most of them have not been willing to do so. In a long meeting between NGO's and government, he negotiated permission for our World Harvest Uganda team to provide a small "Water, Sanitation, and Hygiene (WASH)" package to a thousand families.

We are not a relief agency, we are a long-term, stay-and-participate-in-life model of mission. ALMOST ALL of our fundraising goes towards projects with arcs of decades, not days. But when there are earthquakes, mudslides, floods, or war, sudden convulsions of harm that throw the community into disarray, we have been SO THANKFUL to have a Bundibugyo Emergency Relief Fund that has blessed thousands of people over the years in occasional, quick-response mercies. And interestingly, the capacity to respond with speed and integrity lies not just in being a small faith-based mission with generous mostly North-American donors, but also in the growing cadre of Christ School Bundibugyo Alumni led by our administrator and accountant John who are getting pretty good at this kind of week-long push. John and his CSB alumni team listened to Scott's plan and made it happen: a budget,  official letters of permission, two days on the border in various communities with Red Cross registering actual Congolese in need, two days in Fort Portal procuring jerry cans, bars of soap, feminine hygiene products, water purifying tablets, transport and organisation.

And then today, loading all the above into 7 trucks and dispersing to the communities along the border that are most affected.

We personally accompanied the team to three sites, one of which was the main border town on the main road between Bundibugyo and Eastern DRC. Our missionary team has often participated in some aspects of the actual distributions too, and today 4 kids and 4 adult moms/teacher/intern also came to the largest site to make the giving personal. The day-of logistics are formidable. Scott and I walked through the shelters people had constructed on the land around a Catholic church, basically bent poles tied with reeds then draped with UNHCR tarps to form tents, three-stone cooking fires in the space between them, laundry hanging on the bushes. Thankfully the language stretches across the border so we could chat, listen, laugh a bit, because resilience is amazing. The chairman of the Congolese camped there was a Charismatic Episcopal priest whom we asked to speak to the milling crowd and to pray, to acknowledge that these items come from God via his people, that they are small tokens of his love. Then people came one by one into a roped-off space to receive their aid. Lots of grateful smiles, and curious chatter, but also inevitably those who were not registered and felt left behind.

Bundibugyo Emergency Relief. We long for the day when it is no longer necessary. The kindness and competence of our alumni and our team are a taste of that future. In the meantime, we're thankful to be a tiny part of the net that God uses to lift up the poor from the ash heap. And encouraged by the way that response causes evil to backfire. Because such distress as war, flight, poor water, sickness . . . led to the usual barriers being irrelevant. Catholic, Presbyterian, Episcopal, and SDA churches, government headquarters and schools, Ugandans and Americans and Congolese, young and old, all pulled together to resist the inevitability and distress of sorrow, and to witness hope. 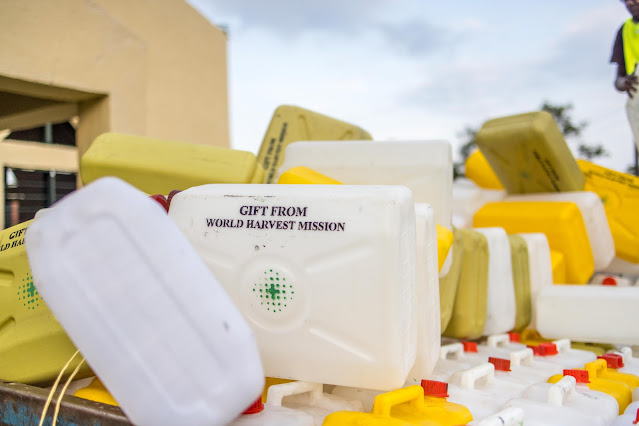 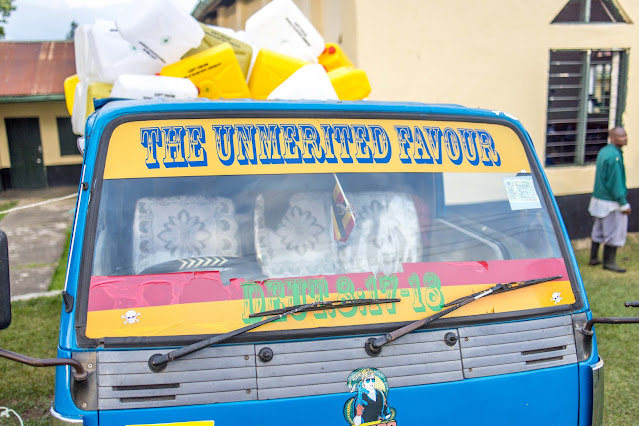 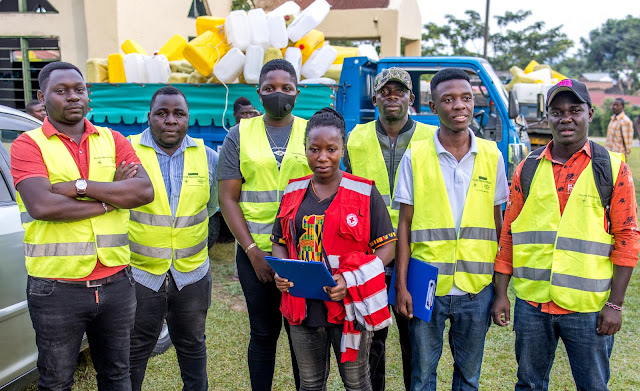 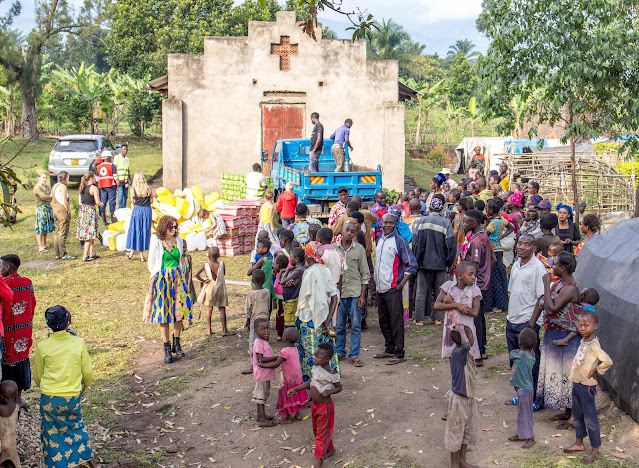 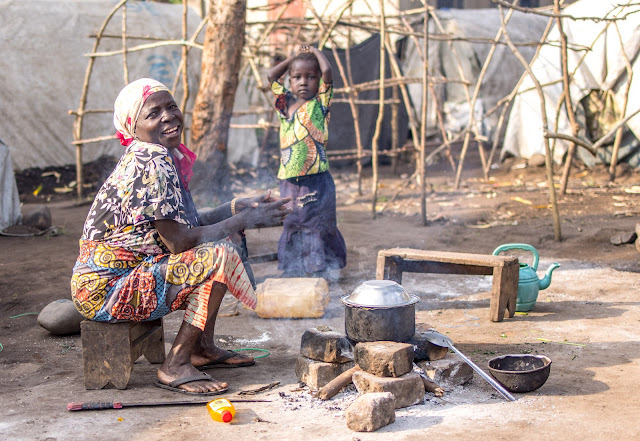 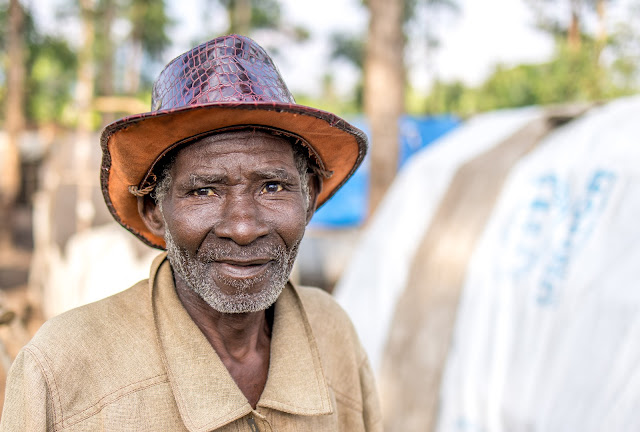 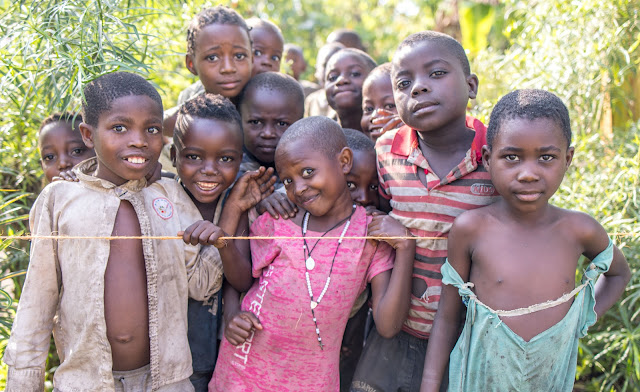 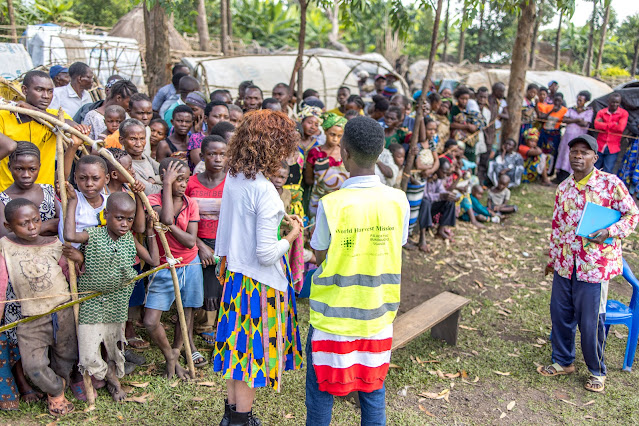 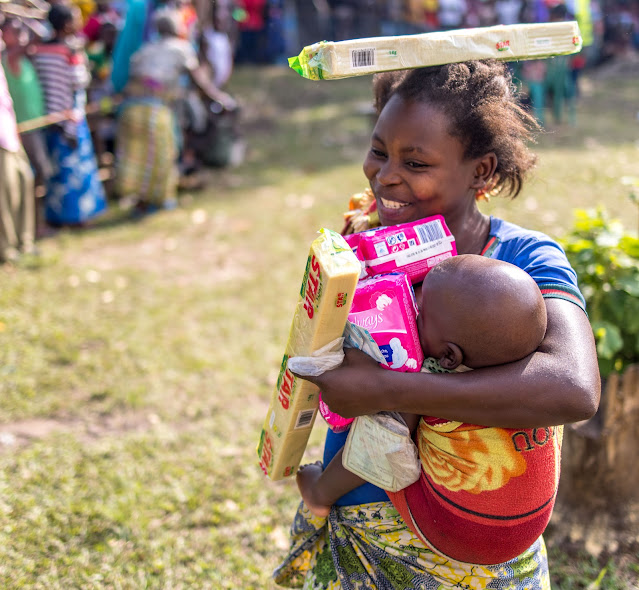 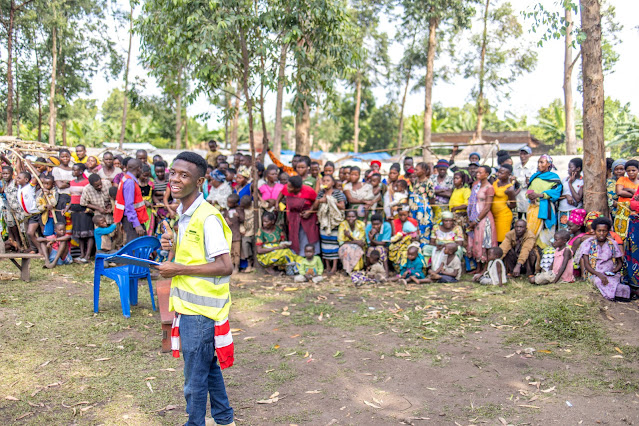 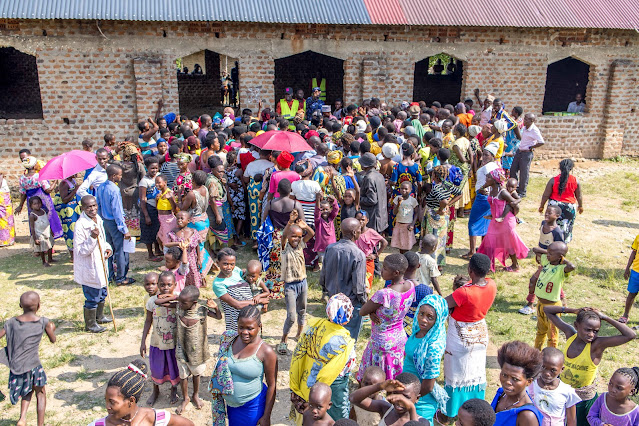 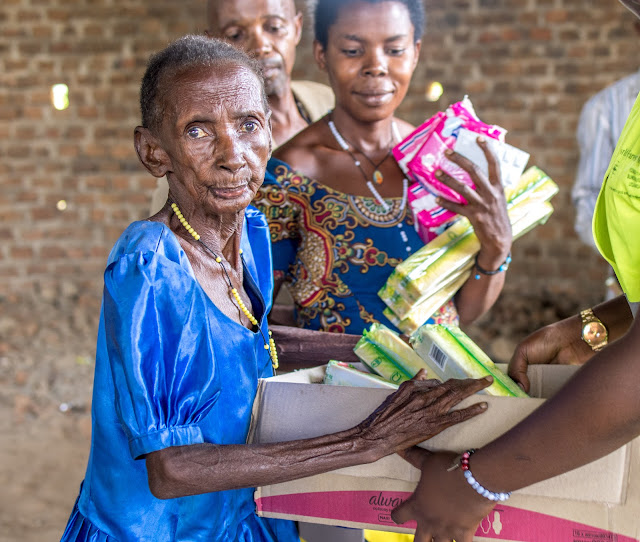 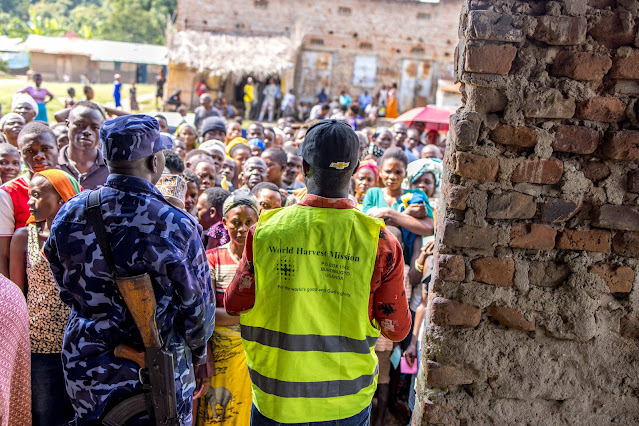 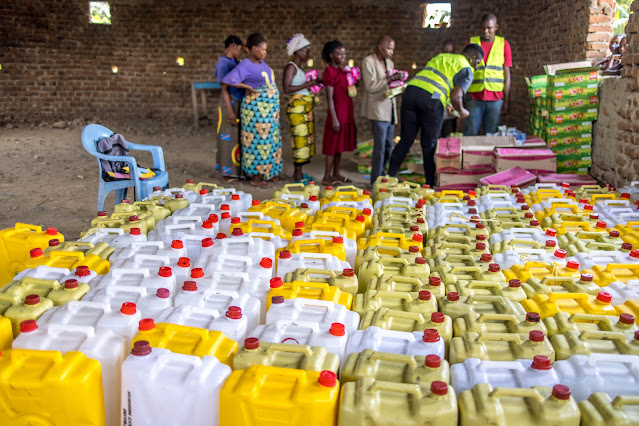 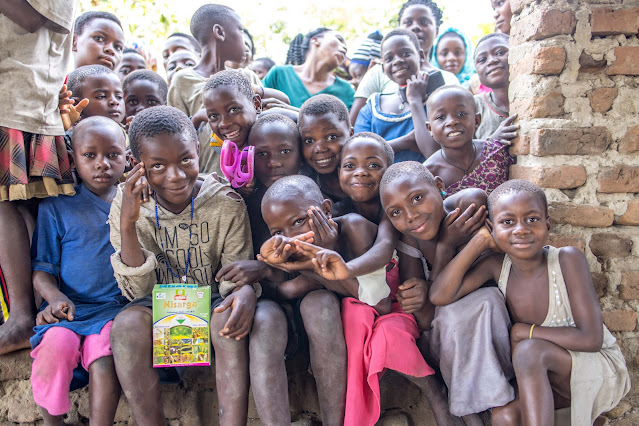 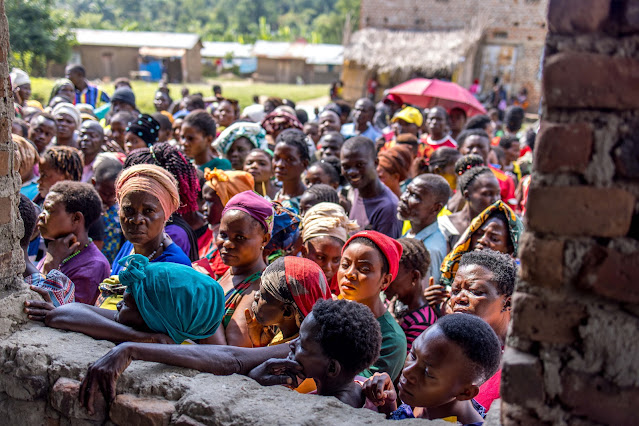 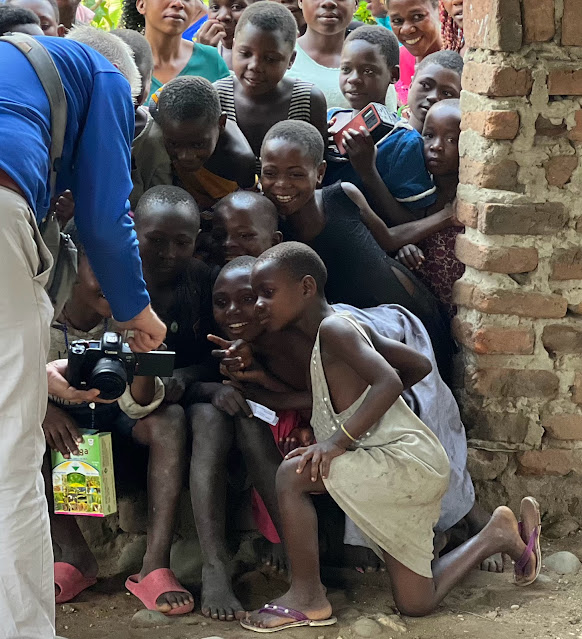