On the difficulty of aid 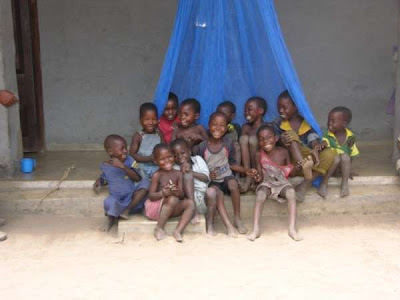 Bundibugyo has received thousands of insecticide-treated mosquito nets from UNICEF, bundled in bales with labels from as far away as Japan, hefted on ships and trucks, stacked in warehouses and then heaved into pickup beds, unloaded at health centers.  What could be better than handing out protective nets to pregnant women and young children, preventing the most vulnerable from being infected with malaria parasites?  Malaria remains the number one killer in Bundibugyo, as in most of sub-Saharan Africa.
But getting the nets hung over the sleeping forms of the unborn and recently-born and about-to-give birth is more difficult than one might think.  A few months ago the hospital administrator was jailed, accused of stealing hundreds of the nets, to sell. Since then the nets do seem to be making their way to the health centers as intended.  But yesterday the staff launched into their litany of complaints about this program.  If even they can not hand out a free boost to their fellow citizens, no wonder we struggle.  Here are some of their observations:
I asked for one bale of the nets to be kept in the Paediatric Ward store, and I am now dispensing them at discharge to kids who are admitted with severe malaria.  My reasoning is that the parents have just narrowly escaped losing their child and will be motivated now to believe the risk is real and therefore use the net, the net will be going to a house which we know harbors malarious mosquitoes, and the child is particularly vulnerable to fatal consequences from re-infection.  Still, it would be ideal to follow these kids a week later and see how many are actually sleeping under the nets.  In a house made of mud bricks or wattle walls, how easy is it to hang a net?  In a house plagued by rats, how many get chewed through?  In a home where mattresses are shoved side by side on the floor to accommodate many kids, how easy is it to hang and use only one net?
Yes, there are difficulties, even in giving away something as straightforward as a mosquito net.  But these issues are not insurmountable.  Attitudes can change.  The same parents who beg, borrow, and steal to manage school fees for their kids can learn the value of a mosquito net.  We all want the same thing:  a thriving, live child who grows up to his/her full potential, whose mother survives her subsequent pregnancies too and stays involved in his/her life.  A few ounces of filmy white netting can be the wall that shuts out death.  It's aid worth giving, even if it is difficult.
Posted by DrsMyhre at 12:14 AM