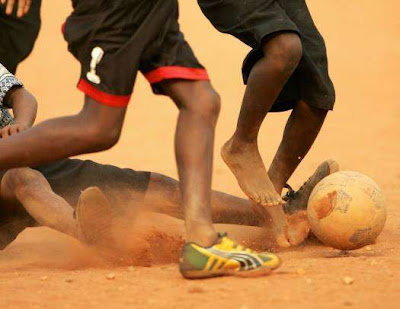 If you have not watched English Premier League football in Africa, you have not experienced the full spectrum of March Madness. This weekend we found ourselves scanning for satellite dishes in villages near the game park where we were visiting, and when the Man U-vs-Liverpool game time came around we filed into the only show in town. Picture a barn basically. A windowless split-log tin-roofed structure, with flattened cardboard boxes tacked up over the chinks. Dirt floor, narrow tottering rough-hewn long benches. 97 people (95 of them men) in an area the size of many American basement rec rooms, watching a TV on a table while a sputtering generator huffed and puffed outside to power the connection. Craning necks, shifting numb behinds. Enthusiasm. About half the crowd found it comfortable to remove their shirts (it was a bit close in there . . ). Almost all the crowd found it enjoyable to talk loudly, comment, clap, shout, jump, slap their friends' backs, and otherwise carry on. As the score stacked further and further in Liverpool's favor (much to Nathan's glee), our family became isolated in our stunned and sober stares. In fact it seemed to me that the African crowd merely wanted to enjoy the game and the win, so their passion for the team increased in proportion to the score. By the end Nathan was standing up with his new buddies, yelling and congratulating each other, as Man U was soundly defeated.

Football, or soccer as Americans call it, is truly the world's sport. Probably every person in that room kicks a ball (or a bundle of banana leaves) on a regular basis. Probably every man could imagine himself playing for a European club, as a good number of African star players have managed to make it there. In spite of the noise, the discomfort, the distant screen, the pungent barn odors, the terrible loss, I felt like it was the REAL way to watch football!

Damn, that was fun to read!

i love your writing style. succint and mostly shocked! amazing!