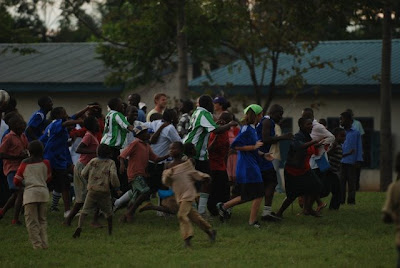 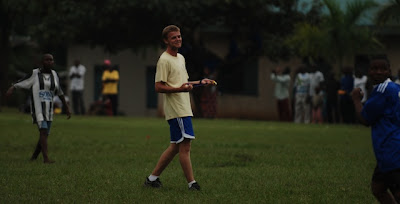 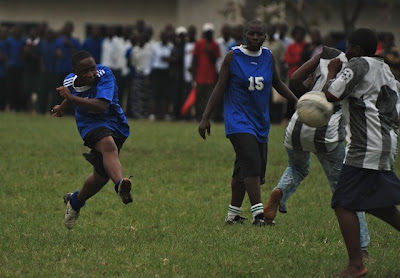 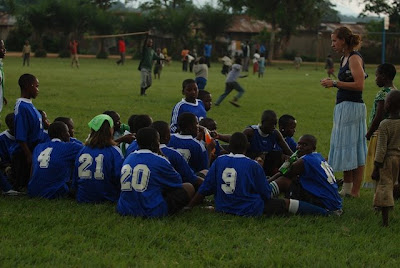 Yesterday the boys' match was reasonably friendly . . . they scheduled it for 10 am to avoid the drunken crowd that disturbed the first semifinal. Unfortunately, they kept the plan a secret until yesterday morning, and it took until early afternoon for Bubandi to round up their team, since they are not a boarding school and probably have pretty irregular class attendance. So it was another limbo day, with CSB suspending class schedule and the team in uniform warming up and everyone standing around waiting through a four hour delay. Nevertheless, CSB managed to win 5-nil.

But the big news in friendly football was the girls' match. It seems that we missed a cultural clue last week. When Simbya agreed to play a "friendly" match with our girls, we interpreted that word as "non- tournament, unofficial". But they did not show up, and sent word that CSB had not demonstrated friendship by sending them "something". Classic. Friendship is defined by the exchange of material goods. If you are someone's friend, you loan/give to them when they are in need. As any American reader might imagine, since we pretty much define true friendship as a relationship untainted by the contamination of financial exchange, living in a culture where true friendship is defined by transaction takes some getting used to. The CSB team sent a crate of soda, and the girls showed up yesterday afternoon.

Christ School won, 3-0. It felt like a very historic event, two secondary school girls' football teams playing each other, in football season, in uniforms, with spectators. There was passing, dribbling, plays, scores. There was a lot of pushing and shoving, it was amazingly physical. Another historic event for our family: Julia got to play for about a quarter of the game. She's 12 (years younger than the other girls) but tough, and she hung in there. But a mujungu wore a CSB uniform and played in a game, and that was beautiful to see. Afterwards she was hugging her team mates, laughing, jumping up and down, even running the post-game lap they like to take. She feels amazingly connected to the team, and we are so thankful for that, and for Ashley's role in it. Another fun aspect of the game: boys stood and drummed and cheered for the girls just like the girls always do for the boys' matches. And afterwards I saw some of the top players of the boys' team organizing to get soda for the girls! Nathan also did a phenomenal job of officiating a very chaotic and physical game

So in spite of confusion, delay, threatening weather, an airplane landing with the Sudan team, motherless baby nutrition day and normal hospital rounds, school, etc. . . . it was a good day of friendly football, and a taste of how the game should be building community for kids in Bundibugyo.

What a great answer to prayer, and planning, and preparation, and patience! I am sure this is a great step forward for girls empowerment in BGO, and it is great to hear how the boys stepped up in support. A learning and growing experience for all.

Great job, Ashley, on leading this effort. I remember being in Bundibugyo in the summer of 2005, when our daugher, Kathryn (Matt Allison's little sister) brought a couple of suitcases full of soccer equipment for the girls' soccer team (of which there was none at the time). She also conducted some training sessions. I can still remember the laughter of the girls as they played. Some of it was the laughter of embarrassment as they tried to learn some new skills. But some of it was also the laughter of the simple fun of the game.