A tale of two dogs, Or the beauty and pain of fostering

Words to live by from Deuteronomy:  You shall not see your brother's ox or his sheep going astray and ignore them.  You shall take them back to your brother.  And if he does not live near you and you do not know who he is, you shall bring it home to your house and it shall stay with you until your brother seeks it.  Then you shall restore it to him. . . (22:1-4)

Perhaps if we focused more on some of these laws the world would be a gentler place. 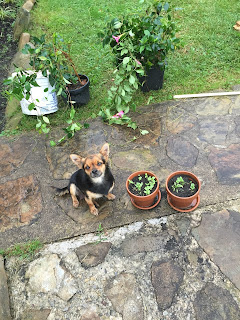 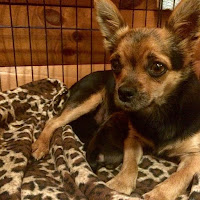 A couple of weeks ago, this happened to us, twice.  The first dog was a little female chihuahua/corgi-ish mix whom we termed an unlikely angel as she appeared just as my book was published, a peculiar life-imitates-art coincidence.  We called her Sparky (angels as flames of fire, and a literary reference to Roald Dahl), fed her, and let her get into our life and heart.  When no one responded to the notices we put up on lost pet sites, and no neighbors responded to our search for her owners, we took her to the vet to get dewormed and immunized and to confirm our suspicion that she was pregnant.  While there, we met the Claws and Whiskers Rescue service, who offered to keep her while we were out of town.  And when we returned four days later, lo and behold, she was the mother of two puppies, all healthy and settled into their new foster home.  The vet worker who took her in didn't want her moved again so soon, i.e. I think they were quite attached.  While we knew this was for the best, and knew we were traveling way too much to be responsible dog owners this year, we were pretty sad driving back to our house.


Until the next morning, when a second dog appeared in the very same porch chair. 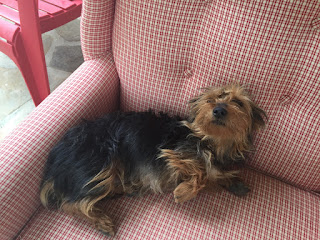 A male this time, at least part-scottish-terrier looking dog.  We had seen him when Sparky first appeared, but he had hung back in the edges of the woods, run away when approached, and she had barked him off once. So we thought he may have found his way back or on, but there he was, looking bedraggled, weak, and defeated.  Scott coaxed him into eating a little bit, and we let him sleep, and fed him again, small increments like a malnourished baby.  In 48 hours he was coming back to life, scampering, following us around.  Maybe the father of Sparky's babies, we thought, maybe both were dumped out of a car by people who couldn't handle having pets anymore, or didn't want the puppies around.  We called our new rescue friends and they wanted us to bring him in right away.  Reluctantly, we brought him too, and this time it was just one loss too many.  We grieved out of proportion for a stray dog and a short acquaintance. 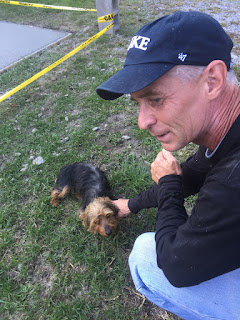 Because when you find something, you feel responsible.  When you watch life return, you get drawn in.  Helplessness calls out caring.  Response begins to spin cords of attachment.  Which works great when it's your newborn baby for whom you will lay down your life for the next few decades and beyond.  But it's a cruel stab when you are just a step along the way for someone else's pet, let alone child.  When you are called to foster and restore.

So this post is a shout-out to my cousin Sandy and our new friends Teri and Christy and all the solidly good and kind people out there who nurse animals back to health and find them homes.  And an even bigger shout-out to the people who foster children, you know who you are.  I hope this doesn't sound flippant to them, but dropping off those little dogs was just a tiny tiny inkling of the risk they take.  Bringing in children, loving them in all their skinny dirty wildness, adjusting patterns and bonding, only to possibly help them reunite with someone else must be the hardest job in the world.  Being a step along the way in someone else's story takes courage.  I suppose we taste it in the hospital too, pouring life into fragile beings, bonding, and saying goodbye, but having a baby in your home is a quantum-leap harder.

Sparky and Scotty gave us a chance to remember why we have had three dogs over the last 21-year-stretch, and to practice a little bit of Old Testament practical kindness.  We heard that Scotty already has a new family, and Sparky will when the puppies are ready.  That's good, and sad.

your personal computer.
to know more about the site , just visit this site below
!!!