This Week: Busting Tribalism One Story at a Time

In a few hours we will reach the one-week mark back in Kenya.  And what a week it has been. 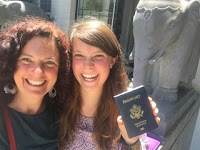 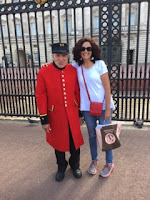 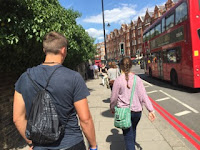 While we were struggling with the embassy of India and its designated private visa company in Washington DC as the clock ticked inexorably towards our departure hour, while we were traveling across three continents and 8 time zones, while we were jet-lagged and bleary-eyed and filling forms for the bag our frazzled BA check-in attendant threw onto the conveyor belt without tagging, while we were processing goodbyes and anticipating hellos, while we were settling into a borrowed home and sorting out all the little glitches of daily life and survival . . . the world was disintegrating.

Two more black Americans were shot by police, the injustice rank and raw on video.  Five police officers were murdered by a sniper with a vendetta.  Across the ocean, and on a scale hundreds of times as dire, South Sudan fell apart on their 5th Independence Day as government soldiers attacked the body-guard force of the opposition during talks in the capital, which triggered extensive violence and chaos and the deaths of hundreds of combatants and civilians.  Days before, terrorists blew up a market in Iraq, again, killing hundreds, and others held hostages in a bakery in Dhaka resulting in 29 deaths, plus several suicide bombers struck in Saudi Arabia, while drones keep targeting alleged plotters and leaders. An IJM lawyer with his client and driver were murdered in Kenya, then pastors on a bus in the North East as well, targets because of their work.  Today an uneasy truce holds, both in America and in South Sudan and in Kenya, but suspicion and fear swirl in a deadly brew that could reignite at any spark. 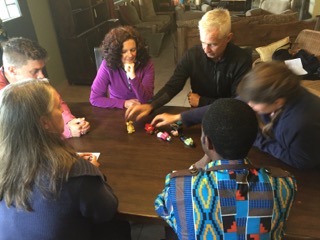 It's a hard time to have left our passport country.  And a hard time to be what feels like a step back from the front line, immersing ourselves in Swahili classes.  Here we are on this little mission station on the Rift Valley escarpment, chilly in the morning clouds, sipping chai and gathering around a table for four hours of vocabulary and pointing and listening and responding.  "Pick up the sister of the boy" "Buy the cabbage for 25 shillings" "Show me the large purple paper" "Put the chicken between the donkey and the cat" "Hold two spiders" "Touch your nose" . . . and on and on it goes.  It's a very interactive and concrete language method, well-organized by Karen.  But does it really matter when people are being killed for their skin color or origin or religion?

The racism of America and the tribalism of South Sudan and the murky brutal politics of the near East have the same root:  fear that my group will not get enough, not be OK, because of the other group.  Millenia after Cain and Abel, we still worry that love is a limited commodity, that survival is a zero-sum game, that grasping forcefully will be justified.  We still have not learned to celebrate diversity.  We still fret over who is favored.  Only now we do all that armed with weapons increasingly lethal.  Now we bump against each other constantly.  But we rarely hear and see.

In spite of globalization and travel and immigration and media, we seem stuck in our own limited stories.  White Americans rarely enter into the reality of living as a person of color in our society; Dinka distance themselves from Nuer.  Muslims and Christians have lost any sense of common ground.  The other color, class, nationality, sexual orientation, etc. remains opaque and distant.

Which is why these hours of tedious vocabulary and adjective endings and proper demonstrative pronouns matter.  Incomprehension furthers division, but a shared language gives grounds for understanding.  Tanzania seems to have had much less intra-tribal tension than Kenya, South Sudan, Rwanda, Burundi, Uganda all around it.  Could that be related to the insistence upon Ki-Swahili as a unifying national language?  It's a tricky paradox, holding onto unique heritage while embracing kinship.  But surely telling our stories and hearing those of others  forms the foundational bridge of peace. 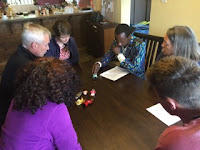 So pray for us as we slog through hours of study.  Pray this time will allow us to bridge into many lives, to hear their stories, to share The Story.  I feel the same way about my books, hoping that those stories of Africa bring the continent to life for a rising generation who will respect and love the people rather than boxing them into stereotypes of otherness.


Jesus is the Word made flesh.  It's all about reversing the polarizing effects of confused language and fear and hate.  Building a new community based on love, and this is the right place for that, an international community with a true kinship.  Here is the antidote to hate, as expressed and pictured by the multi-cultural choir at RVA.

Karibuni bara la Afrika. Thank you for your insightful postings. Keep them coming, stay safe and live in praise and adoration of our Lord.
And say hello to Rodger and Ginny at Kijabe when you can.