Linguistics as Liberation: a story of learning Lubwisi 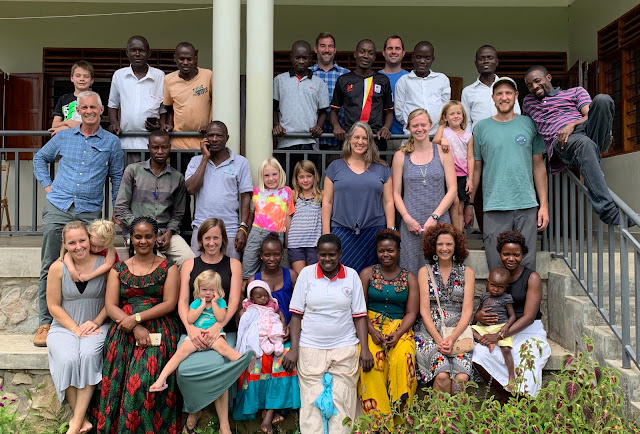 Uganda celebrates independence tomorrow. 57 years ago the British granted the Uganda Protectorate full independence. Of course prior to the 1800's Uganda existed independently with no permission from the British at all, with four or more distinct Kingdoms, each with their own languages, traditions, militaries, trade patterns, preferred foods, capitals and courts. Besides those four, there were dozens of smaller groups creating their own cultures and habits. One of those smaller groups was the Baamba-Babwisi-Batalinga-Babulibuli grouping here on the northwest slopes of the Rwenzori mountains trailing into the vast Ituri rainforest, straddling the imaginary border lines that the British and Belgians negotiated. They lived with very minimal contact with the world at large until the British put in a dirt road in the 1950's and set up a yellow fever research station. The larger kingdoms and tribes around the area tried to dominate, and the British actually encouraged that using those more familiarly organized tribes as administrators of their taxation and profit-making. So I suspect that independence in 1962 did not much impact the average person here. Over the next two decades Uganda's central government in conjunction with Protestant (Church of Uganda) and Catholic missions had set up a few schools and clinics, and our own World Harvest predecessors were making trips from Fort Portal into Bundibugyo to run immunization clinics, public health trainings, and the beginnings of churches. In the process we realized that the predominant language spoken here, Lubwisi, had never been written down. There were no books, and no Bible.

So from the late 80's on, we have had linguists on our team who have worked with local cultural leaders and trained Babwisi themselves to take over the work. They spent years meeting with hundreds of villages to clarify the vowels and consonants and decide on what letters to use, then more years translating the Bible bit by bit. We now have a full New Testament, and some primers, and work ongoing in Psalms. Meanwhile schools are teaching kids to read in English (in spite of national policy of learning to read first in the mother-tongue language, backed up by solid evidence that such a policy leads to better English literacy in the end), all secondary education is in English, government and business occurs largely in English (well, not really here, but most places). So you might argue: WHY learn Lubwisi, why translate it, why invest hours and years into this small language at all, when English competence dominates the world?

Because God cannot be known fully in English, or any other language.  I am deeply indebted to an excellent book I am reading but not quite finished called Global Humility by Andy McCullough. He re-writes the tower of Babel story by pointing out that after Noah, in the chapter BEFORE Babel in Genesis, a diversification of language and culture was actually the good work of humanity in the world. It was Nimrod the hunter who tried to control, centralize, enslave with one language, one tower, one place. In this perspective, the intervention of God to re-enrich the languages was not an act of punishment but an act of liberation. "A multiplicity of languages, then--and this is the important point here--is a blessing, not a curse."

Which is what we devoted the last week to here in Bundibugyo, thanks to Karen Masso.  Karen joined this team not long after we did and we have walked this path together for a very long time now. The Massos have moved back to the USA but Karen still works as a language-learning facilitator for Serge, gathering materials, teaching, supervising, investigating options for language schools. She prefers the growing participatory approach, which involves a lot of visual aids and repetition and a recording-listening app called Mesha. She taught 14 local people in the mornings to work as language helpers and then we all had lunch together and those 14 worked with the team for the afternoon, 1 or 2 with each adult and our best helpers taking the kids in a group. One week is just a taste of what we need to continue plugging away at for months and years. But perhaps the best part of it was the capacity to bring together our very diverse group and start building community between the language experts and the needy foreigners. 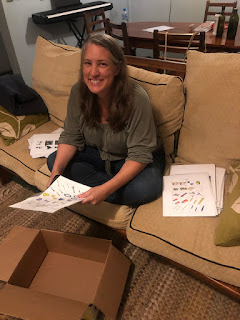 Every night Karen was cutting out visual aids and arranging packets 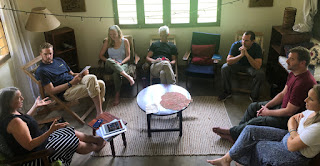 Day one, a meeting with Karen to explain to us the process 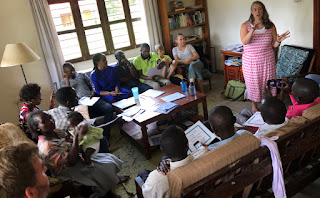 We usually had brief times as a group then the bulk of the time was one on one or two. 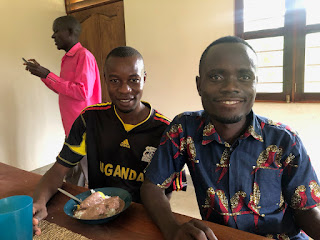 Many of the new language helpers are CSB grads, including those who found faith and purpose in those years 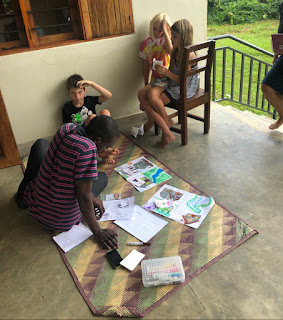 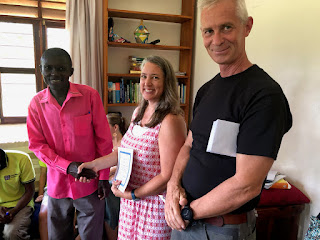 The last day, we handed out certificates and tokens of appreciation to all our helpers. Just a representative sampling of the "graduation" shots. 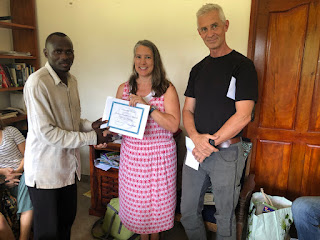 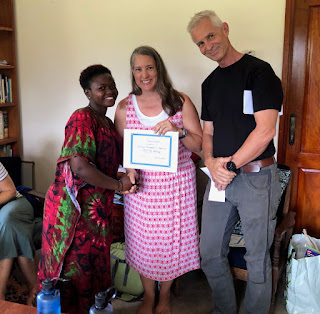 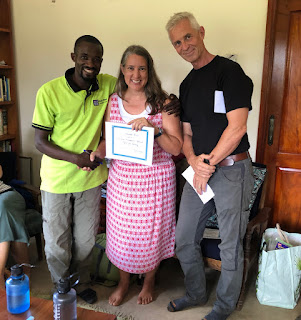 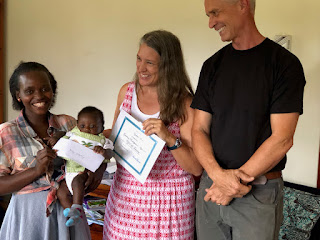 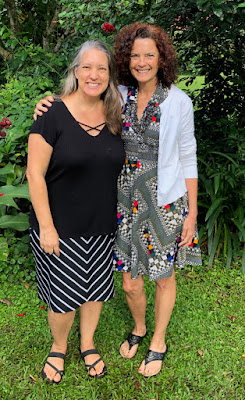 what a gift to have a true friend spend the week with us. Missing her already.
Posted by DrsMyhre at 11:30 AM

Thanks for this brief history of Bundibugyo and the Lubwisi language. Although people from different cultures may have differences that may be "sinful" in the light of the ten commandments, they may have strengths too. E.g. stealing vs. honoring your father and mother. Have you (Jennifer) or Lisa noticed this? These kind of things may be more evident in the established communication.

Love love the way you honor the local languages and culture (even after all these years of living out through many of its challenges) and the how you articulate the exploitation of colonialism. I especially enjoyed hearing about Karen's great work from the perspective of the beneficiaries. May God speed you along in this process.