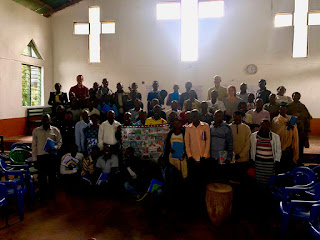 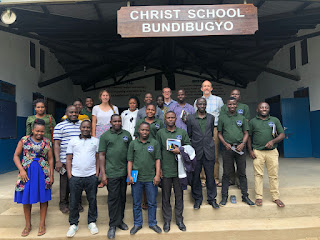 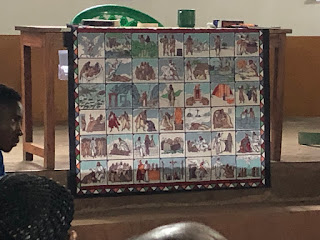 Sometimes I get to explain why I wrote four young-adult magical realism novels instead of books of theology or culture. Besides the fact that I don't know enough about God to write theology, or enough about anyone to write about culture, I actually think stories offer unique ways into our thinking. They allow us to enter another's reality, to build empathy, to ponder cause and effect and morality and truth and mystery more subtly than a factual treatise would.  They get past our defenses and cause us to see the world and ourselves in new ways. Story subverts our assumptions, molds our baseline narrative, our world-view. Story engages us at the level of our imagination, not just our rational thought.

Three times this week, these ideas have jumped out for me.  First, I watched a few minutes of Ta-Nehisi Coates being interviewed about his new novel (which I have yet to read).  Everyone wants to know why someone quite successful in writing non-fiction took up this new form of communication.  He explains: "You could state verifiable facts to people, and they would just bounce right off . . . what I realized, was that what they were actually resisting was not the facts, but the implications of the facts . . . and so I realized the way you get to that is through story telling."

Secondly, I reached chapters in Global Humility on narrative and parable, in which McCullough says:
"Media and the arts have a creative, parabolic power to hold a mirror to society, to speak of judgement and hope, but in non-direct ways which engage the imagination in a society which does not accept the authority of the Bible prima facie." 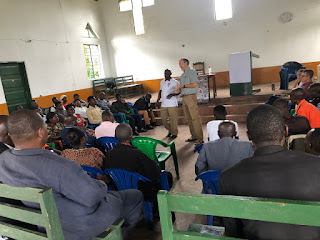 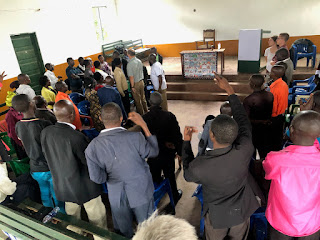 And thirdly and most importantly, we hosted our Serge Kenya colleagues for a week.  George Mixon pointed out that 70% of the Bible is in story form. He came with Jack and Andrea Roylston to teach a large, interdenominational, multigenerational group about Chronological Bible Storying. This is a technique developed for primarily aural learners in oral cultures. Typically, participants work for months or years to memorize 30-40 key stories that tell the Big Story of God's work in the world from Genesis to Revelation, learning how to tell them with factual accuracy and engaging drama, how to ask questions that dig for meaning, how to open doors to encounter with capital-T Truth. We only got the introduction to this work this week, but how rich it was! George, Jack and Andrea did a 3-day seminar for 75 women and men representing over 30 churches and schools, taught at CSB chapel and two church services, worked with Sunday School teachers, and also led a 1-day seminar for CSB staff. 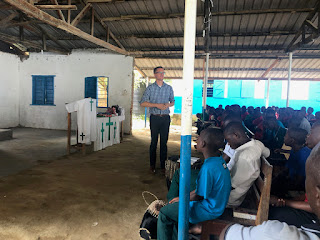 Most sessions went like this.  One of the team would ask a question, a big question, the kind of heart-question that we all struggle with about life. Then they would tell a story, say the story of Eve, Adam, the Serpent and God in Genesis 3, or the story of Jesus healing a bleeding woman and the dying girl in Luke 8. After telling the story straight through twice (repetition, the key to learning!), they would then engage the audience with good adult-learner techniques. Asking questions, playing games.  Everyone stand up, and you can't sit down until you provide the next sentence of the story.  Break into groups and tell each other the story. And so on. Once they were sure we had the story facts in place, they would start delving deeper. Why do you think Eve said that? What if Jairus had not asked Jesus to come? These would eventually lead to the real heart of the story: what does this tell us about God? About us? About God's relationship to us? 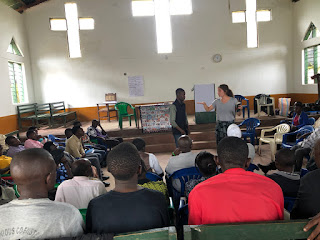 It was delightful to watch our friends engage. For me, to see how the stories can make SO MUCH MORE SENSE to majority-world listeners than to the world's wealthiest elites, or how they resonate with real life in 21rst century Uganda. To see how my neighbors picked up on certain details (shock and dismay when Jesus delayed going to see his sick friend Lazarus, unforgivable!) that would not have been as important to me. To witness their skill in story-telling, something that is very much a part of this culture. To see teachers at CSB make the leap to how this kind of technique (interactive, socratic) would be applicable in their classrooms in general, not just in a church-like setting.

Thankful for this week of stories!
Posted by DrsMyhre at 6:21 AM