Africa is generally last to the table. Last economically, last in health indices, last in control of resources, last in accessibility to education or electricity.

But at this moment, being last is being best. Unlike times of Ebola, when the rest of the world is frightened of any contact with Africa . . . this time, for now, the only reported African cases are from travellers (mostly from Europe), and African countries are blessedly dark on the coronavirus map. Which is a good thing, but also a tricky thing for those of us with a foot in multiple worlds. 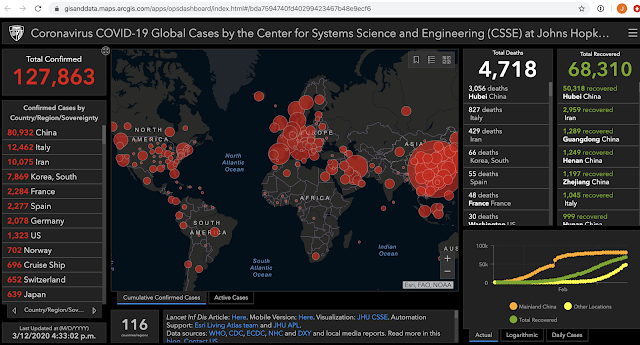 So here's some of the complexity of watching a pandemic from afar.

Being on the edge of a current Ebola epidemic (which is now almost over, and had 3444 cases and 2264 deaths) and having had a massive measles epidemic (which killed more Congolese children in 2019 than coronavirus has world-wide so far, at least 300,000 cases and more than 6,000 deaths, which we as a human society didn't get too alarmed about sadly) . . . we are not strangers to the importance of paying attention to disease and its prevention. So when the WHO and the CDC and numerous universities issue warnings, and when Lancet starts publishing studies that are peer-reviewed and sobering, paying attention is a matter of life and death.  The key facts we know are

So, those are the facts.

Now, there are admittedly a zillion things we do NOT know. For instance, when a country reports a case, or ten, or thirty, is that how many cases truly exist or just a factor of the number of tests done? Sadly it seems to be more the latter.  For every death, there are probably a hundred or more cases in the population. Another thing we don't know is the exact timing of an infected person being able to infect others. It looks like that timing may include the day or two before symptoms appear. Meaning that well people may be well, or may be a day away from sickness and still able to make others sick. We don't know how long it will take to reach the rest of the world, what the impact will be of all the information blitz and the travel restrictions. We don't know the health impact of the economic downturn.

And we don't know how long Africa can hold out. Uganda has banned arrivals from 16 countries including the USA; anyone who insists on coming is required to self-quarantine for 14 days. This continent's main advantage is that half our population is under age 15, therefore less likely to get severely ill.  Our older people might be healthier than most continent's older people, just to have survived. Poverty might mean less lung damage from smoking. Temperatures routinely get over 30 degrees C, 100 F, which decreases the virus's lifespan on surfaces.

All that might be outweighed though, by our fragile health system capacity.  In the best of times we don't have enough oxygen to supplement kids with pneumonia; what will happen if large numbers of people need it? In the best of times we lack ICU care. IN the best of times our ratios of doctors and nurses to population are frighteningly small.  People live in close proximity; social distancing is definitely a counter-cultural stretch.

Besides the facts, what we know and don't know, there is also the vague cloud of instability.  To me this feels like the days after 9/11.  We were here in Africa, and felt safer than our families were. It was hard being far away. The wobble of the world was such that there would always be before and after. And that made it hard to think very far ahead. Would travel stay unsafe? Would we be able to see family in the coming months? Similarly, now, our Serge Africa friends are feeling the punch of restrictions.  Visitors are canceling. Plans we had for an every-four-years- reunion conference in late May have been canceled. The intersections with our kids and mothers most likely won't happen this summer. These kinds of losses are huge.  We feel the exhaustion of decisions, of care, of predicting, of vigilance. We feel the weight of making a mistake that could make us the vectors of bringing disastrous consequences. We feel the likelihood that a crashing stock market will translate into less generous capacity for giving, less funding for Christ School, less emotional space for people to pray for us and care. We feel the anticipatory sadness that further pressure on African systems will mean further instability and death.  Most likely, we and our teams and our families will all hunker down and find a new normal and pull through just fine. But the months ahead look trying.

That's the pandemic view from Uganda tonight, in the rain, with news playing in the background. Tomorrow we'll be back to rounding on too many patients, meeting with staff, struggling for justice, gently caring for the sick, praying for others, and finding the new normal.

And we will be reminding our own hearts, and yours, that God is with us.