58 years, 204 days of COVID, and Worth as a Fact without Conditions

Yesterday Uganda as a 20th century independent post-colonial country turned 58. Uganda, of course, existed from the beginning, and the people who live and congregate and cultivate and celebrate here have done so for millennia. Still, the modern state and I began our trajectories together in 1962, and it turns out we have a lot in common. African roots, European influences, British colonisation, and a delight in passion fruit, have shaped us both, and in less than a week we Myhres will celebrate the 27th anniversary of moving to this country and continent.

On a bike ride today, I took a road I had never traveled. And it reminded me of just how significant the last 27 years have been in Uganda's 58. 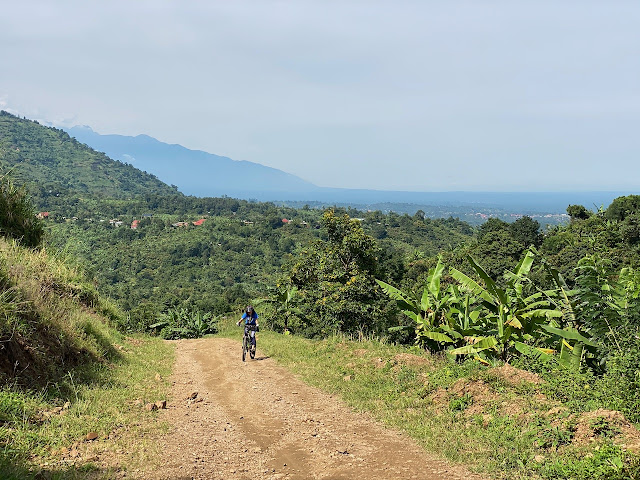 Full disclosure, I took this road because I was hoping for an easier trail . . . Scott is a biker and I am a wanna-be who has been trying since I was 18 and met him to keep up. Sometimes on a weekend he graciously invites me to join a ride. Yesterday's Independence Day holiday did not really happen for us: it just meant working harder with fewer staff, coming back to some hard phone calls with people we had hurt, then catching the end of a burial of a young man our kids' age whose dad was an early friend of the mission. I know I was depleted (and have been) so after eggs and coffee this morning we loaded our bikes on the car and parked in town so we could take a winding dirt road that hugs the mountain roots from Bundibugyo to Kikyo.  We both thought we remembered it being more reasonable than it was (which stands to reason because we last rode on a motorcycle and it's been more than a decade . . ). 7 1/2 miles doesn't sound long until you know the rough terrain, the steep climbing, and the minimal function of my gears. It was gorgeous and some fun, dramatic views into Congo, maroon cocoa leaves and little purple sprinkles of wild flowers, greeting surprised people, crossing streams.  But at the planned turn-around I decided I couldn't face repeating all that up and down in reverse, and needed to find a road into the valley and hit the paved main road, while Scott turned back along all those buttressing spiny roots of the mountains to reach the car and then take the main road to meet me. My route was a little longer but easier. Anyway, as I sailed downhill, I passed lots of homes that took me back to our earlier days. No bricks, all wattle and mud-walls, no electricity lines, quiet, no radios blaring, birds, greeting, families grouped around shelling beans or drying cocoa, long stretches with no one at all. While I found it peaceful and nostalgic, I also realise that Uganda has embraced a warp speed of change in 27 years. Ubiquitous cell phones, electric power, pavement, piped water projects, "permanent" (brick, cement) building materials, cars and motorcycles, schools and churches multiplying, doubling population. I love the simplicity of the old days, but I also love the fact that we can treat malaria with a very effective new medicine, and that dozens and dozens of young people go to university every year, and we have a local-language Bible and radio station. Bundibugyo was always on the margins of the Kingdoms that preceded the British, and on the periphery of the colonial system. So in 2020, I think we're in our best place yet. When we pray, Your Kingdom come, your will be done, on earth as it is in Heaven . . . this is what we mark with another year. That's a longing for light, a determination for goodness to rain, to reign. 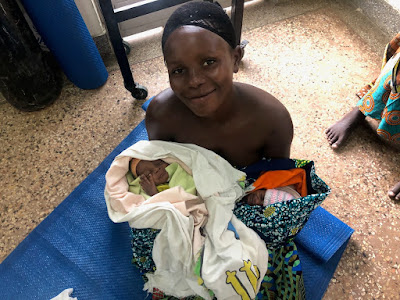 And though we have poured ourselves into this place and called it home, we will always be straddling our American and African attachments. So on the same day we marked Uganda's Independence, we read an excellent editorial by the author Marilynne Robinson. It was called, "Don't Give Up on America." The gist was, the spirit of our times teeters too close to resentment. Our polarising leaders and our own fearful hearts lead us to fan anger, disappointment, alienation, suspicion into a bitter hostility. And that makes the trust in reality, in truth, very difficult to muster. Which we need in order to work together for the common good. My favourite part of the essay, though was the beginning, which I will quote here:

What does it mean to love a country? I have spent most of my life studying American history and literature because of a deep if sometimes difficult affinity I would call love. Deeper, though, is a feeling like a love of family, a hope that whoever by whatever accident or choice falls under the definition of family will thrive and will experience even a difficult life as a blessing because his or her worth is a fact without conditions.  . . . Human beings are sacred, therefore equal. We are asked to see one another in the light of a singular inalienable worth that would make a family of us if we let it.

That is grace right there.  Worth as a fact without conditions. That grace creates a family, a community, a church, a country if we let it. That grace turns a difficult life into a blessing.

Not giving up on America, or Uganda, or the human family.

Vote, call out truth, and work for change. On Friday we lost two babies and a preteen child who all should have had better, faster care. The root causes of that lack are deep and complex, and not easy fixes. Those children had worth as a fact, no conditions needed to be proven for them to deserve life. Justice failed them. We've come a long way, but there is room for so much more. What if money was allocated fairly? What if jobs were filled with people of integrity? What if all girls learned to read? What if we had the courage of knowing that only God's opinion of us matters? My Bible reading this morning was the Sermon on the Mount, Matthew 5-7. If there is anything that shines out of those chapters, it is this: God's ways are not ways of spotlights and force, they are ways of goodness that only make sense when we see the bigger picture of a universe arcing towards justice and mercy. What if we prayed for those who treated us spitefully, and doubled down to work behind the scenes for those who asked too much of us?

In Uganda, or America, that would make the next anniversaries in 2021 something to celebrate. 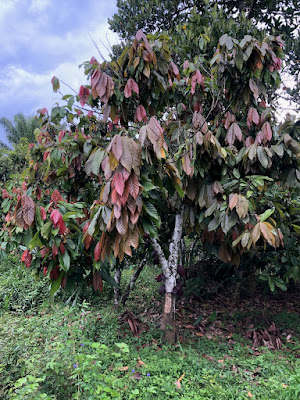 Cocoa trees, closest thing we get to Fall

Lovely reflections. I really like that tag line of unconditional worth...derived from the One who alone is worthy and invested is with His image.
When you write that justice failed the deceased children, do you mean that they suffered injustice? Or, in what way did justice fail?