200 days of 2020 have now been spent in near-continuous alertness to disaster. In fact, Uganda's version of the pandemic is better than most. Our mortality rate hovers just under 1% (reported deaths/cases are 82/8965 . . which of course is not in the least bit reflective of actual deaths or cases, but the best we can do). We spent 5 months in a severe lockdown (for a long time, not allowed to drive in a car except to work at the hospital a few miles away, no movement beyond foot a few hundred yards to local markets, no churches, schools, restaurants, gatherings of any kind) with a flat curve. In the last month we're now opening a bit just as cases start to escalate, but nothing like the USA. And yet . . . the sense of impending doom lingers. If one of our team mates draws the 1 in 100 or 1 in 1000 straw, there is not a lot we can offer. Most days are spent in a miasma of respiratory virae under the hot heaviness of an N-95 mask, for which we are thankful. Help is limited, money is tight, medical supplies are sparse. It weighs. 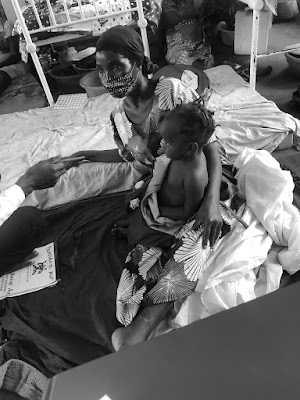 Yesterday for instance, the morning report announced 16 sick babies in NICU (accurate) and 95 on Paeds ward (less accurate, but we probably did see over 70). When you consider that they have not been reviewed, or had vital signs, the charts are little lined paper books and the labs disappear for days, so each one is a blank slate of figuring out who-what-when-where-why . . . it takes a lot of energy. No one died on our watch, so there's that, and the sickest children from last week were all rebounding: a ten year old with cerebral malaria who had been unconscious with abnormal pupils, a six year old with severe malnutrition and anemia listless with sickle cell disease, a six-month old twin pair with pneumonia. We even discharged a 6-week old who had been critically ill on oxygen for days with a bronchiolitis. One of the preems came back looking great. We strive to hold onto those moments of thanks. Because it's otherwise a sea of insanity. It's hard to bounce from a preteen with unexplained ascites to a 1 year old with an undiagnosed complex syndrome to another kid strolling in with a massive neck tumour to then next dozen who have received variously incomplete courses of malaria treatment that needs to be rectified to a follow-up for low weight gain. A student appeared, I spent extra time on patient #3 making it a learning opportunity, he then disappeared for the rest of the day and I never saw him again. Referrals departing, referrals returning. An unexpected big-wig arriving to teach the staff about HIV diagnosis. Parents asking for discharge. A district official popping in for his own kid to get a check-up for the most minor rash. It's relentless. I am very thankful for Dr. Isaiah, without whom I might still be there lying on the floor (actually there's so many people, the floor is pretty much covered, so I'd be lying on some patients).

Scott meanwhile did two surgeries and all of OB rounds, all of which was quite life-saving, and still had time to help me get through the last few kids. We were just pulling out onto the road about 3:30 pm to get home in time for Scott to have a meeting with some of the other Area Directors when my phone rang. One of our key partners, Clovice, was at a smaller health centre with his wife. They had been at our house on Sunday with anxiety about her upcoming delivery, and Scott had checked her term pregnancy with an ultrasound and BP and reassurance, but now she was in labor and it was impossible to understand on the phone. We decided to drive straight to the health centre, and once there we confirmed she was in potential trouble. The young volunteer recent-grad doc had done his due diligence. So, forget the meeting or a drink of water or anything else, we piled her entourage and luggage into our vehicle and turned around to go back to the hospital. 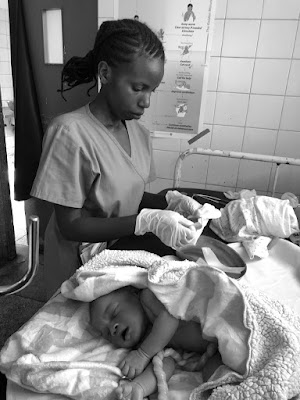 It turns out that a few phone calls and a 5pm-ish timing makes for better-than-usual emergency care. Long story short, with a quick C-section and a bit of resuscitation and a few harrowing moments, the outcome was a delightfully perfect little girl and a happy dad. Mom will be happy when she feels better. 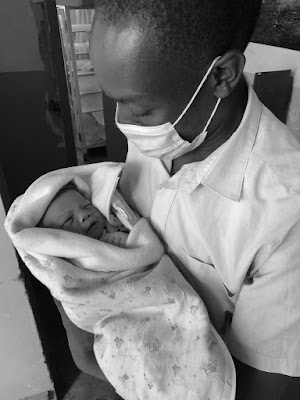 Back to the wall: five minutes before that phone call, I was DONE. I find myself reaching the limit and resisting the stretch. And yet when it was a friend, a faithful person, a family who are not just names or diagnoses but real people, we didn't hesitate to add on a couple more hours. By 6 we were reaching home again, and by 6:05 someone was knocking on our door, and the wall was back up.

So, truly we need transformation ourselves. Me mostly; Scott is solid. I know it is a scarcity mentality, a lack of faith, a mental wall that feels the need to be protected from one more problem. In the irony that so often accompanies life, per request of the Medical Superintendent we started a staff Bible study series on Monday mornings. On whom? Abraham. So, I was teaching about faith and courage and the unknown and sacrifice and stepping out at 8 am . . . while grumbling about exhaustion 8 hours later. Sigh. Yet, limits are also OK. They are human. They are part of the design of creation. 6 days of labor and one to rest. Three score and ten and then eternal rest. Another paradox, that we are called to embrace faith and sacrifice; we are called to let go of being superhuman saviours. I think we want inviolable lines that excuse us from the hard work of having to hold onto both of those truths. In this moment, have faith and push on, in that moment, say no and turn off. Both are valid and we won't always get it right. Which is why we need grace just as much as we preach grace.

200 days down, unknown days to go, and asking for an infusion of courageous can-do spirit, and of peaceful let-go rest.

Praying for you, Jennifer, in this hard time of stress and separation. Just simple getting through the day takes more energy. May God be with you to strengthen your heart and hands, and may the Holy Spirit wrap you in His arms to rest. Love, Judy in HMB

Jennifer & Scott,
Thank God for the many daily mercies He gives to others through your hands. May He continue to give you both strength.

"Thy shoes shall be iron and brass; and as thy days, so shall thy strength be."
Deuteronomy 33:25