The story of Jesus' birth contains deep paradox--a chorus of angels in the night sky singing peace, then a company of soldiers slaughtering toddlers. 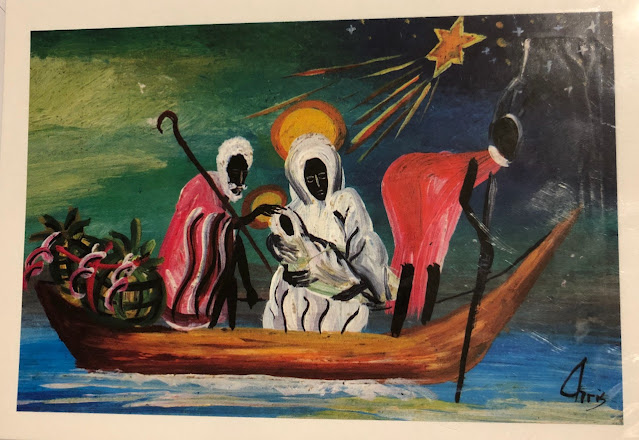 post-slaughter flight to Egypt on a Ugandan Christmas card

As does life, always in every place, only some days it is more evident than others.

Yesterday, we started our rounds as usual, and Scott was immediately told about a woman in labor who had had two previous C-sections. After one C-section, women can try to labor and deliver naturally, but after two the risks of those scars being too weak to hold in the intensely powerful contractions of labor becomes a real concern. She was early in the course, and an ultrasound confirmed the uterus was intact and baby was fine, but Dr. Isaiah agreed to delay his planned elective C-Section for this lady to move to the front of the line. In the theatre, as nurse Kacie set up to receive the baby, she noticed the woman's extreme pain and distress, which in retrospect was probably when the uterus burst. To get any sort or emergency done in a timely way, Scott keeps a locked drawer with the drugs for sedation, cleaning solution to sterilize skin, even the sutures. He laid that out as the staff got out the instrument set and drapes, then as he always does, said "Let us pray". Only for the first time ever, before he could start praying, it was the patient who jumped in and prayed out loud for herself! As she said Amen, the ketamine took effect and she was out. That was a timely prayer, because he found the uterus exploded, the placenta no longer giving oxygen, the baby with a low heart rate floating free and in need of serious resuscitation. Because Kacie is a Helping Babies Breath ninja, and Scott was there to get things moving and supplement the supplies, that baby's life was saved. He spent the next two hours doing a hysterectomy (the womb was not salvageable) with the wrong instruments, no suction, no big sponges, bowel and blood everywhere,  and about half the suture that would be used in resourced places, which the staff had to get out of his drawer as they went along. Then getting the mom transfused, and then seeing all the other patients on the ward, and rescuing a woman who had severe malaria and anemia and other significant infections. But all in all, though he was drained and dehydrated and hungry by late afternoon, it was an angel chorus rescue day, life winning. 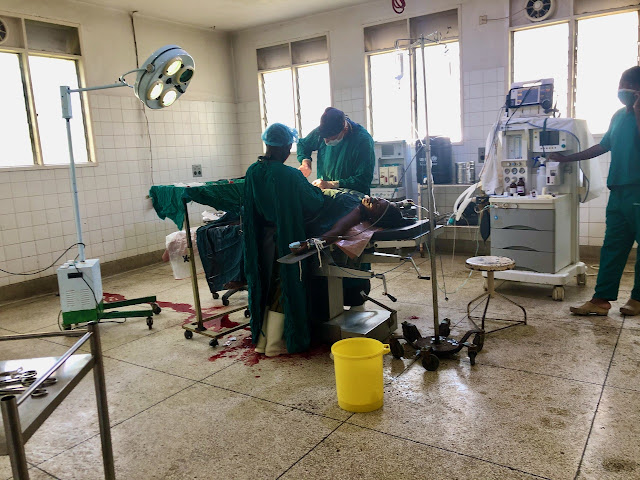 I peeked in to check on Scott 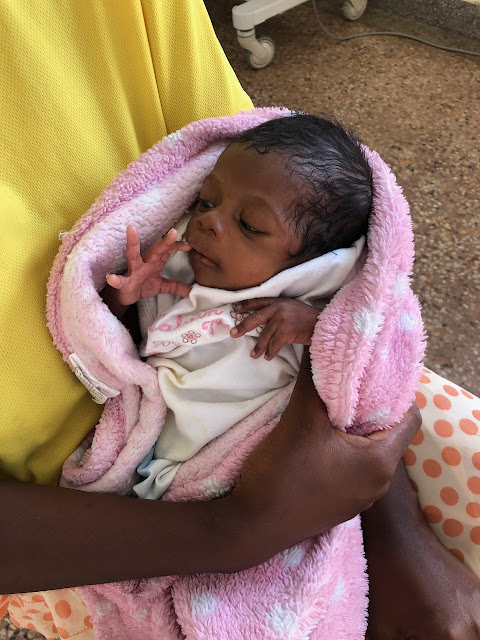 One more life-filled angel-rejoice sight, a preem discharged after 33 days

I, on the other hand, plodded along through my usual mess of preemies and asphyxia and infection, malaria and burns and bone infections and sickle cell. There was a 4 year old with a skull fracture and brain bleeding from being hit by a motorcyle as she walked along the road ('tis the season for reckless drivers and too many pedestrians), who will likely recover. About an hour after I left, the nurse called to say a baby whom we discharged last week had returned and wanted review. Since I was miles away, I asked another doctor to see them, went on with my afternoon, but at 5 pm as I walked back home the family was sitting in the grass in front of our community center waiting for me. The baby looked pale, weak, and had vomited blood. I recognized him then, he had had severe brain-damaging jaundice from blood group incompatibility with his mom, and by the time he was admitted after a week of life there were irreversible consequences. Nevertheless, we had kept him for about ten days of treatment and he had left when they begged to go home Friday, improving a bit. I shouldn't have let them go, because by Monday he was NOT Ok. Sadly, they had not waited to be admitted that afternoon, instead deciding to come find me. I was exasperated with their choice, but wrote up all their admission orders, labs to check, dosing of medicine plan for the week, and gave them money to buy a less-available antibiotic and to get a taxi to the hospital. I called the doctor who was still around, and he talked to the NICU nurses to prepare. Sadly this morning I found out that they didn't go back, and the baby died during the night. The slaughter of an innocent side of the day, death too real.

In my early years, I think I found the Herod-killing-babies part of the story shockingly horrible, which it is. If I were writing the story of God coming to earth, I don't think I would have admitted to that part. Surely I don't want the life of my child to mean the death of untold numbers of others. It is a story that weighs, that disturbs the flow, that is glossed over. Rachel weeping for her children. Broken hearts. But the longer we are at this, the more I appreciate the paradox. Jesus' birth was the beginning of the end of evil. But not the end of the end of evil. Evil is still amongst us, still real, still lethal, still heart-breaking. And the fact that even Christmas has a dark side means that we shouldn't be surprised by a rough Monday in 2020 either.

The angels are bright with glory, but for 99.99999% of us, unseen. By faith we declare that God is with us. The rampaging agents of destruction, however, are all too easily seen . . . Uganda approaches elections and police fired live rounds into opposition crowds, tribal militias in DRC have attacked other tribes, medical workers are striking in Kenya, Burundi remains one of the poorest countries in the world. So I am sort of glad we have a story that is not unrealistically bright, that contains a dark edge, that relates to our reality.

I always think of my communication efforts as aligning with the Flaubert quote - "Human speech is like a cracked kettle on which we tap crude rhythms for bears to dance to, while we long to make music that will melt the stars.”
By contrast, your writing is music... stirring up so many emotions and rallying to action.
Thankful for you.