On Just Mercy, and Creating Noise

Yesterday I was walking down the hospital sidewalk with a Kenyan friend and colleague whom I greatly respect.  She talked me off the ledge last week, and I value her wisdom.  I was lamenting that one of our discharged NICU preems was still in her cot; she has been held hostage for weeks now over inability to pay her bill, even though costs here are quite low with government subsidies.  She doesn't even look like a preemie any more as she gains and grows.  My friend said something along the lines of, well, I used to try and advocate for individual patients, but I found it just created noise.  In other words, be quiet and let the system (slowly) work, because if you call attention to the dysfunction it just generates ill will.  Focus on the places we can make an impact, like this afternoon session teaching "Helping Babies Breathe" to our interns. 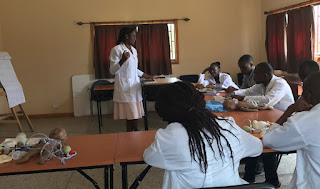 As God is my witness, I've generated some serious ill will lately.  The week before I had bugged social work and hospital administration repeatedly over the cases of two other kids, both with AIDS, from desperately poor families struggling with their own illnesses.  I could feel the hostility.  Then I spoke up, in what I thought was an appropriate, anonymous, and systems-improvement-oriented manner, about some gaps in our own team's care which I believe contributed to a death and could have resulted in several more.  Gossip and assumptions percolated until I got texts saying "working with you is unbearable" and "do you know everyone has a problem with you, no one wants to work with you, do not interfere with how we work."  Those are not paraphrases, they are direct quotes.  And they hurt.

I am sharing this because I've been at this for 24 years, and it is still murky.  And hard.  I still struggle with the wisdom of finding that line between cultural acceptance and passive aggression.  When does the lack of noise represent playing into an unjust system, and when does it represent humility?  Could I have been more gracious, wise, patient, and kind?  YES, always.  Should I acquiesce to systemic dysfunction because it is the delicate balance of this reality?  Maybe, sometimes.  Can my education, my otherness, my skin color and nationality, my age, my verbal tendencies, all become liabilities of power that wound?  Sadly they can.  What would Jesus do?

The answer to that I find complex, and impossible to dictate.  Jesus observed Jewish cultural norms that will not necessarily be universal or eternal: temple visits and festivals, synagogue reading of scrolls, choosing men as his closest disciples for his itinerant teaching.  Jesus also created a LOT of noise.  Healing on the sabbath, challenging the perceived righteousness of the established leaders, defining love with an enemy as the example (the "good" Samaritan), touching the unclean.  Only he knew how to do that with perfect wisdom, and with genuine love for all involved, both oppressed and the rule-blinded enforcers.  I don't.

So where does that leave me, and probably most cross-cultural workers who join the struggle for justice and healing and hope, then find that attempted change meets serious resistance and generates quite a bit of noise?

Mostly, I think, we have to embrace over and over the paradox of the prophet--speaking truth requires love.  Acting for mercy requires humility.  I so much want to make things right that I often get it wrong.  We are never perfectly able to hold both mercy and justice equally well.  So we ask for wisdom (Job 28 was this morning's reminder), for the Spirit to groan in and for us (Romans 8), so we can choose our battles, and accept God's pace.  Sometimes we encounter something worth creating noise about.  Most times a bit more patience would allow us the quiet space to be heard more gently.  There's no formula for always getting that right.  Please pray for us. 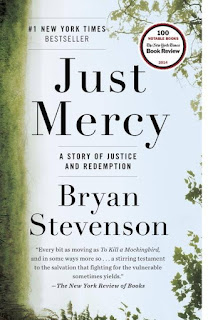 Let me end with a plug for a book about someone who seems to embody a modern-day example of getting this more right than most.  I finished Bryan Stevenson's Just Mercy last week too.  He writes the true story of his career in law, representing people on death row in Alabama (there were so many) as part of the Equal Justice Initiative, because our American court system suffers from some of the same imbalance, structural discrimination, tragic unfairness, dysfunction, and just plain sorrow, as the Kenyan health care system.  As you read, you cheer for him, but you also see his own pain and the way slamming up against racism over a lifetime has left him broken as well. And after about 280 pages he opens his heart.  He tells us that once he realizes he is fighting, not because it is necessary or important, but because he's broken too, he finds the strength in that common humanity to continue with compassion.  "I understood that even as we are caught in a web of hurt and brokenness, we're also caught in a web of healing and mercy.  I thought of the little boy who hugged me outside of church, creating reconciliation and love.  I didn't deserve reconciliation or love in that moment, but that's how mercy works.  The power of just mercy is that it belongs to the undeserving.  It's when mercy is least expected that it's most potent--strong enough to break the cycle of victimization and victimhood, retribution and suffering."

That's the Gospel.  Kenya needs it, and so do I.

Lest you think we're quitting, we're not. Yet anyway.  After absorbing a good bit of hate, I also got a good dose of encouragement from someone else.  I received mercy, whether I deserved it or not. This person, also a cultural insider, told me not to quit, and ticked off a list of changes that have happened these 9 months for the better:  doing exchange transfusions, tracking data, creating what's-app sign-out lists for communication, using second-line drugs, recognizing and treating life-threatening dehydration, organizing rounds to see the sickest patients first, increasing our level of teaching.  Change is hard, but some change is good.

God is intentional in all His works. Maybe silence does speak volumes. Leaving room for someone else to feel dismayed... Yet, aren't you there as a teacher also? You're in a tough spot!! God consistently asks me to pray for you. This week was pretty specific to what you wrote about so if that is encouraging...know He is completely in this with you. You are there on purpose.

I find that trying to follow in Christ's way is always a huge challenge, and that it never gets easier for very long.
Your choices, your caring and working, are such a wonderful, inspiring example of holding the paradox in your heart. Thank you so much for wanting to be God's hands and heart. I read your posts with such gratitude for your honesty. I am praying for you.
I have just begun reading the book that you recommended, Rohr's Hope Against Darkness. I was struck by his phrase (p. 26) "the power that Jesus is offering us from the cross."
When I come up with what that power is--mercy, forgiveness, compassion--it seems to be weak, inactive (like most of the Beatitudes, smile). And yet that very power is what unites us in our hope against darkness. Christianity is such a profound paradox, as you point out regularly. Thank you so much again, Jennifer.
And thank you for suggesting this reading. It is a real source of encouragement, as are you. May you be blessed. Judy in HMB