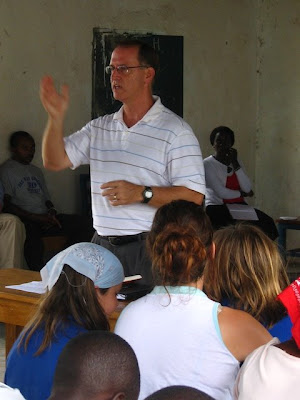 Kevin Bartkovich, our long-time team mate and friend, is in the hospital in Durham NC in critical condition.

He had gone out for a jog with Joe yesterday and collapsed within a hundred yards of the house. Thanks to Joe's calls for help neighbors called 911 and started CPR. JD ran out to find him with no pulse or breathing, and continued the CPR herself until the ambulance arrived. He was in ventricular fibrillation, the kind of arrhythmia that causes sudden death. It turns out that he has a previously undiagnosed congenital anomaly of his aortic valve, which occurs with some frequency (at least 1 out of a hundred people) but does not usually cause any symptoms until mid-way through life, and then the first sign can be this kind of sudden collapse during exercise. The paramedics had to shock his heart three times; the third time in the ambulance finally got it beating again. Kevin was without vital signs for at least 5 to 8 minutes. In the Duke ER he did try to fight the tube in his throat for breathing, and opened his eyes, so those are hopeful signs. He is heavily sedated, medically paralyzed, on life support, and cooled down to a near freezing temperature, all to try and minimize the damage to his brain from the long period of no oxygen. Preliminary tests indicate he did not have a "heart attack" (myocardial infarction) or a stroke; the collapse was due to the electrically ineffective rhythm his heart went into.

Yesterday was the Bartkoviches' 15th anniversary. I can only barely imagine JD's experience of finding Kevin lifeless on the street and doing the first CPR she's ever had to perform, on her own husband. By the time she got her 4 year old twins cared for and got to the hospital, she had no idea if Kevin was alive or dead, since she had last seen him put into the ambulance after the first two attempts at defibrillation were unsuccessful. Her family, and many friends, have rallied around her now. His prognosis is far from clear, he is certainly not out of the woods, but we hope and pray that he will recover without major impact on his brain. He will eventually need a replacement of the abnormal heart valve.

Where is God's mercy? We can not see it as clearly as we would like; we say by faith that it must be there. Here are two glimpses.

One, since this event stems from a life-long silent heart defect, it could have happened any time during the Barts' ten years in Africa. Kevin's final weekend he hiked over the mountain pass with teachers from CSB, a strenuous endeavor hours from any road or phone, not to mention hospital. He coached soccer and jogged around the school track. If v-fib occurred here, he would not have survived. Even if he had gone down most places in America, he might not have been revived in time. This happened five minutes from one of the premier medical centers in the world. This is a small vision of the way God sends His angels to keep us from stumbling, even when we don't know it.

And glimpse number two, this occurred in the midst of Christ School crisis. Yesterday the students were becoming very restless and threatening violent strikes, the immediate issue being the school's new policy of having a "spot exam" (pop quiz) period at the end of every day. The bigger issues are complex, related to being teenagers, poor, reckless, with little to lose, no skills for non-violent conflict, distrustful, many with histories of abuse and abandonment. We got the news about Kevin while students and staff were in the midst of meetings over their complaints. The meetings turned into prayer meetings for Kevin. This was a needed reality check and change in focus, at least for the day.

With tears and love, we lift you all up before the Father.

May God come through for him, and be with his family and friends through all this..

I will pray for Kevin & JD. And I will also add my moment of God's grace: when my then 13year old was in a bike accident and suffered a TBI, a pediatrician was the first person to stop and offer her knowledge and assistance. Without her, I can't imagine where we would be. God's moments of grace are everywhere. WE just need to look for them. God bless.

I'm praying for a full recovery and much comfort for Kevin and his family today. My hope is that they come out of this having a wonderful story to tell of God's provision in the face of such a critical situation. I will pray for JD and the kids as they wait for news. May God also give you peace today as you go about your work while shouldering this news.

Our prayers are with Kevin and the Barts today here in Maine.

The plan is to have updates posted at the Barkovich's blog. There is one brief update there now.

Please spread the word. Thanks.

I'd like all the friends of Kevin & JD to know that the word is getting out to all the alumni of the North Carolina School of Science & Mathematics where Kevin taught for many years and JD was a student. Most of us had Kevin as a teacher and many had him (as I did) as a coach and mentor. He touched so many lives and this tragedy is especially heartbreaking. We are all thinking of their family and our thoughts and prayers are for a swift recovery.

As Colin says, many of us know Kevin as a soccer coach and teacher -- in my case from as far back as the Duke TIP program in 1982. We're wishing him a swift recovery. Thank God he was on Duke's doorstep when this happened.

Keeping them in our prayers. We lit a candle at the Church of the Holy Sepulcher thanks to http://holylandprayer.net. God bless.