Today is day 12 post-flood and landslide.  Now the SUV caravans of UNHCR, CRS, Save the Children, Uganda Ministry of Disaster Preparedness, Ministry of Health, NGO’s that care for internal migration, the Red Cross, are moving up and down the road (or what’s left of it), calling meetings that suddenly disrupt normal work in the hospital or government, that pull people into the priorities that each group brings with their tarps and money. Mostly this will eventually be good for Bundibugyo. Some press, some concern, some supplies, some effort. Only one water system has been repaired to functionality, and Josh is still problem-solving and infusing some relief funding to keep the water tanker trucks filled and moving to the hospital and camps for the displaced. 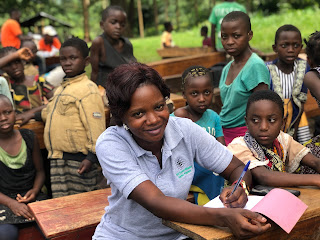 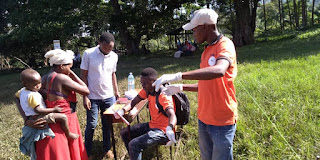 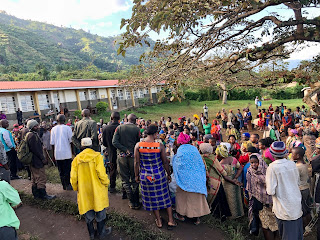 Meanwhile though, since we have actually been living through all this rain and muck ourselves, and since we are connected to a small flexible organizations and donors who are quickly responsive, we were able to supply about 500 people with emergency survival items last week, and we’ve now completed nutritional surveys at both IDP (internally displaced persons) camps this week. We gathered and trained a team, purchased supplies, and visited one camp yesterday and one today. At each place we began with prayer and a good-news story, grounding the relief effort in the reality that even in sorrow, God sees and cares. Then women and children were registered, receiving books for recording health visits since their possessions were lost. We gave each child a dose of Vitamin A and emergency supplies of ORS (oral rehydration) and zinc (tablets) that they can use in case of diarrheal illness, a life-saving intervention after floods and rocks destroy waste disposal and cut off clean water. Next each was weighed and measured, then the results analyzed to identify any that were moderately or severely malnourished. In a normal situation, we’d expect 3% or less of kids to qualify. This week we found 16% of the children were malnourished (40 moderately and 5 severely, out of 185 screened). 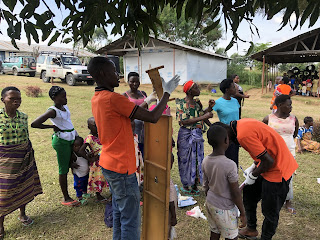 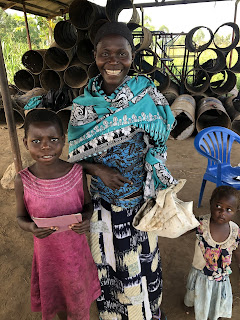 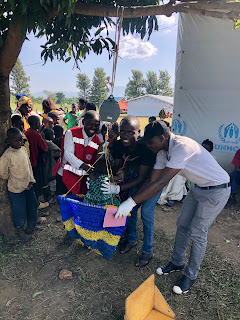 The good news is that all of the children received a kilogram of supplemental protein rich food, a peanut-soya-morninga leaf blend that will boost their nutrition. The malnourished ones received a quadruple supply!  Plus antibiotics, and a follow-up appointment.

Hungry kids are vulnerable kids. Poor nutrition increases susceptibility to disease, and negatively impacts brain growth and development. It is one of the cycles of poverty that is very difficult to break without an infusion of help from somewhere—food to make people survive and thrive, heal and grow, learn and play, and eventually care for their own families. 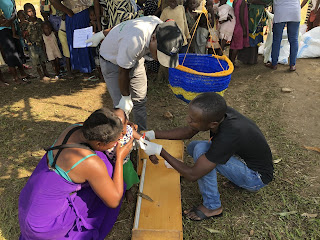 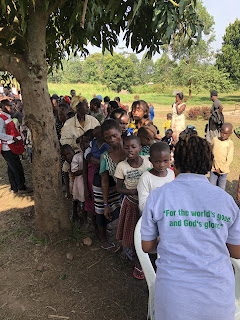 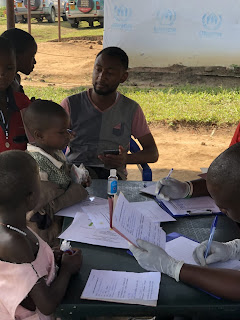 Our team has had a focus on nutrition for decades, because it is an intersection point where spiritual truth, parity in relationship, justice in economics, wisdom and kindness in social circles, education and achievement, all meet. Real religion is just this: caring for the orphan and widow in their distress (that’s in the Bible).  In fact we are thrilled to have Serge Apprentice Jessie Shickel spearheading this program right now, and would very much like to have more help. The work this week not only identified and helped another almost 50 families . . . It was a visible touch of God’s mercy in a place that needs to see it.  It was an opportunity to learn new skills and serve for 13 mostly CSB alumni. It was a little taste of the Kingdom for us all.

And it was a reminder of Christmas (isn’t everything), because the young child Jesus was born displaced in a makeshift camp . . And then was sent fleeing as a refugee across borders. The magi came with their gifts, people of resource who studied the situation and came with their aid. Re-imagine the scene of the gold, frankincense, and myrrh, expensive gifts, as an aid distribution. Some portable goods the family could use to survive. Brought out of the respect and curious wonder of people from far away, who wanted to help. 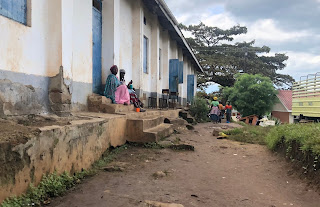 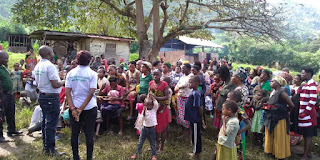 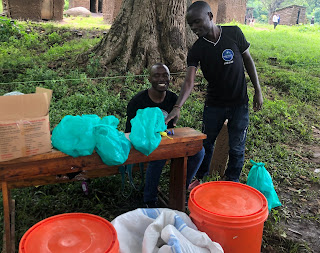 Tonight we will meet with the district leadership and a number of NGO’s. The disaster response is hopefully turning a corner where the bigger agencies will take on an increasing role. Our team will continue to support nutrition and water, and look for gaps we can fill. And Scott and I will head tomorrow to our own Christmas break meeting our kids. We are deeply, deeply weary, feeling the weight of sadness around us, the desperation. At the same time, as much as we are eager for a break and for a reunion, we will truly miss this place for a few weeks. Where you pour your treasure, there is your heart. We’ll be back in January, hopefully with a little rest and perspective.

Let me close with a photo of our team this week, the young men and women who have worked hard to make all this happen.  These are my 2019 Magi. 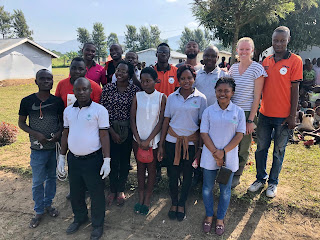 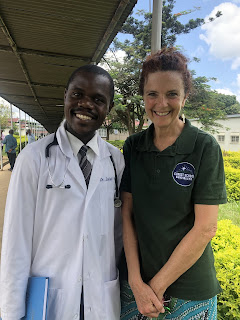