The Best Christmas Pageant Ever

If you have not read this book in the last week, it's time to read it again. Preferably out loud, with people you love, under stars around a campfire. And if you're prone to crying, then have someone else read Chapter 7.
It is a slim story by Barbara Robinson about an annual Church Christmas program that is unexpectedly thrown into disarray when the Herdmans, absolutely the worst kids in the history of the world, get involved. It is a story about nothing less than grace.
Imogene is bossy, loud, mean, manipulative, aggressive, unpopular. But when she encounters the reality of Christmas, it "comes over her all at once, like a case of chills and fever". Unlike the self-righteous flower committee . . she encounters Jesus' mercy without presumption or preconceived ideas. This has been an Imogene Herdman sort of year for me. I'm reflecting a bit on why as we go through this season of Advent, preparation, anticipation. As a team we're looking at the first chapters of Revelation and the gifts God gives of life, a new name, a vocation, and a home, paralleled in the Creation and Fall , redeemed in Jesus' first coming, and to-be-perfected at the end of time. And I'm grateful for the deepening awareness of sin and shortcoming and the harsh cost inflicted on others, or at least I want to be grateful, which is a good first step. I think God planned out our lifespans so that people in their 40's have teenagers to sanctify them (and vice versa), and for some of us we're in the "adolescence" of our 17th year in community as well. In your 20's and 30's a lot of life goes on, but you're so busy surviving . . . that in this decade of 40's it's time for some important character forming work, a lot like the teens, with swinging hormones and decision branch-points, to become hardened in one's ways, or to become a person of gentleness and joy. That's where a few bold teens come in handy, particularly if you're blessed with one who is brutally honest, verbal, insightful, growing spiritually, and partially separated from home so that he has a separate world of holy, patient, committed, competent adults to contrast you to. Then throw in some good hard relational conflicts, some great meditation time with God, some insights like the poison ice cream that peel away how you wish people saw you and mirror what your friends and colleagues really encounter, and the stage is set for a Herdman-sort of pageant, a coming into Christmas tentatively and sorrowfully. 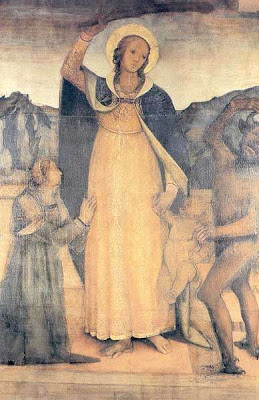 Imogene, after playing Mary in the pageant, asks for the Sunday-School picture of Mary as a keepsake, perhaps revealing the purity of what she longs to be. When we got to that point in the book this time, I was deeply impacted, because about a week ago a picture came to my mind which we had seen in the civic museum in San Sepolcro, Italy, some years ago, and with the wonders of the internet I actually found it to look at again. It is by an artist named Gerino da Pistoia, and is called something like Madonna del Soccorso. I had never seen any portrait of Mary quite like it and was very drawn to it at the time, and all this delving into names and vocation brought it back to my heart. In it Mary is clubbing a demon with whom she fights for the life of a baby . . but all the while looking serene, beautiful, radiant. Since pictures of Mary are not a normal part of my life and thought, the two encounters this week caught my attention. How to have the passion and power of a club-wielding woman-of-God, without friendly-fire accidents, with a face of love? And how to know His grace when I see how far from that portrait my own reality lies?
The season is not yet at its final chapter, the awe of grace has not yet fully washed over. Let us wait in anticipation, welcoming redemption, unexpectedly wrapped in swaddling clothes.
Posted by DrsMyhre at 11:52 AM

I am always appreciative of your writing, Jennifer, and your posts continue to remind of the reality of the Kingdom's blessings and costs. But this post resonated with me in a very personal way. I am a fellow mid-life mom of teens, painfully aware of the disconnect between my desires and my behavior, both of which are duly noted by my children. Oh, how I need to rely more fully on the One in whom there is no such divergence!

My 12th grade ESL students just finished this book-- they loved it. Most of them have experience with pictures of Mary, and we all agreed that Alice Wendleken seemed the part much better.
But thankfully Imogene got it-- thankfully it's ok for Mary to be imperfect and frayed. The pageant was better for it. I want clean edges and haloes, but I guess that won't always happen this side of heaven.
Praying for you!
-Becca I.