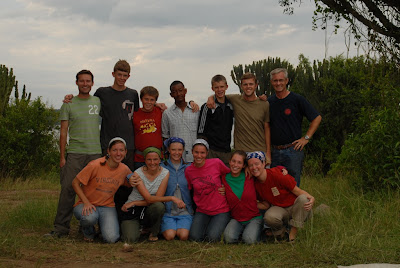 Saturday morning most of our team headed out of Bundibugyo, and in spite of car problems and forgotten items and a rain storm, managed to make it over to the eastern side of the Rwenzori range to Campsite 2. This is a promontory overlooking the Kazinga Channel between Lakes George and Edward, an isolated patch of national park where we love to camp. Everyone who had not previously camped there with us joined in. We arrived in the late afternoon to set up tents and cook dinner, grilling sausages and vegetables to wrap in tortillas, all over a fire, as dusk deepened and a light chilly rain began to fall. Because of the rain we all scurried into our tents early, and miraculously Scott slept. He is usually up tending the fire and shooting hyenas with a sling-shot, but he was so utterly spent by the last few weeks, that between the rain and the weariness we didn't notice any nocturnal visitors. Not so the newcomers, who were anxiously attentive all night to the plethora of animal calls. 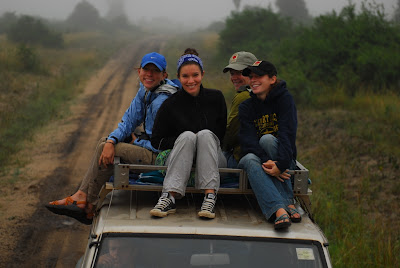 Sunday was a true Sabbath. We drove for several hours around the park. My favorite memory of the day was the swallows, blue, darting, swooping, keeping pace at eye level as we sat on top of the truck bouncing along the rutted tracks. And a monitor lizard, a grand-daddy of the reptiles as big as a small crocodile, stretched across the road blocking our path, in no mood to move. And the afternoon boat launch, breeze on the water, thousands of birds, up-close yawning hippos, wallowing buffaloes along the shore, graceful stilt-legged storks and jeweled kingfishers in the reeds. And the elephants. And sitting around the campsite reading, while the kids kicked around a small soccer ball amidst the cactuses and clouds, in the heat of mid day. And just about everything! In the evening we joined up with Pat, and the PIerces, who were staying in lodges, and after dinner had a celebratory cake to say goodbye to Sarah. 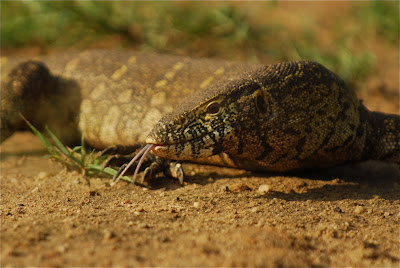 Then back at the campsite we read through our week's Advent readings aloud and shared what God had been impressing on our hearts this week, as the fire sparked upward and joined the millions of starpoints of light in the clear sky. Kids young and old roasted marshmellows (or as Ashley says, marshed roastmellows), and we sat around the fire singing every Christmas carol we knew and some we didn't, until late at night. Lions rumbled their territorial growls across the channel, and later we were awakened by the rising sharp call of hyenas gathering nearby. But nothing disturbed our circle of fire and friendship. 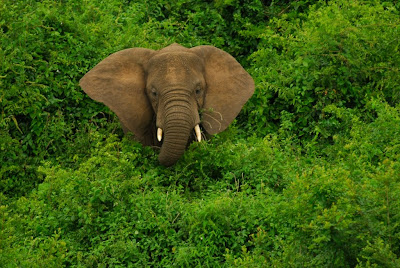 There is something about getting away into the wilderness that brings our hearts back to God, to the wildness and order that He created. The tensions and problems of life fall away as we enter the isolation of the game reserve. Our humanity is put in context, and we are humbled. Very thankful.
Posted by DrsMyhre at 4:43 PM

Jennifer, This is Anna's mom. I've been blessed by you blogs for the past 6 or so months since we knew Anna was heading your way. Haven't heard from Anna in a few days so I especially appreciated hearing about your camping weekend. Thanks for your faithful writing as well as your thoughtful ponderings about how God is moving so we in the US can feel closer to our loved ones. It is a comfort to know that Anna is under your team leader care. Be assured that I am praying for all of you. P.S. I loved seeing Anna front and center in your pix.