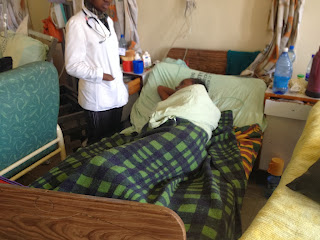 Jennifer writes about lots of tiny babies, but today let me share the story of a 57 year old woman I'm caring for on Kijabe Hospital's Womens' ward.  Mercy's her name.

She came in with some diffuse respiratory symptoms: cough and shortness of breath for several months.  Let's call it a chronic cough.  Should she have come earlier?  Perhaps.

She underwent the standard work-up for her problem: complete blood count, chest X-ray, sputum examination - as well as a test which every patient get who is admitted to any hospital in Kenya: an HIV test.  Bang - positive.  Life-changer.  I have not gone into the details of her lifetime partners with her, but in most of the cases we see at Kijabe, women are married and faithful to their husbands - while men are out and about and inadvertently bring the virus home to their wives.  Don't mean to man-bash here, but those are the facts.

So, Mercy is very sick.  She has several signs suggestive of tuberculosis.  And she's dealing with a new diagnosis of HIV infection.  That's a lot to deal with.  She's got to be worried about the possibility that she might not live as long as she once expected to live.  She is dealing with denial, anger, or fear - or all of the above.

So on Friday we were rounding and began to speak with her at the bedside.  As if things couldn't get any worse…she told us that she received news that her two sons who are in their late 20s got into a serious fight the night before…and killed each other.  My jaw dropped.  This is beginning to sound a lot like the Book of Job.  Debilitating and potentially terminal illness.  Estrangement from her husband.  Death of her children.  Not much left except for her house to burn down.

I stood at her bedside with my two medical trainees - silent.  What to say?  I tried to think of what to say.  I tried to express some words of consolation and encouragement.  Everything I could think to say just seemed so trite.  I really can't imagine being in her shoes.  Try it.  You have just been told you have AIDS and that your two sons killed each other last night.  Unfathomable.

Well, I made an effort to console her in her sorrow.  Then she looked up and said, "If you put God first, then everything else will be OK."  No sobbing, fist-shaking, screaming.  Only quiet confident words of faith.  Very inspiring.

That's my prayer when I face disaster.  No cowering, groveling, cringing.  Lament yes.  But hopefully, that howl melts with disturbing clarity into worship.
Posted by DrsMyhre at 12:01 PM