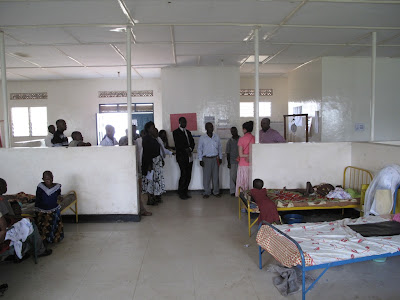 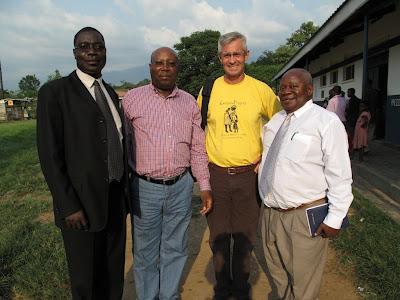 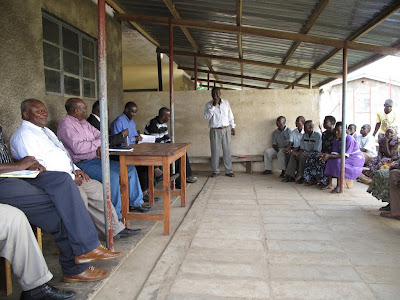 We welcomed two more visitors today, Dr. Naomi who is spending two weeks with us in the midst of her family practice residency to further pursue God's call to missions, and Brian a friend of the Pierces who came for a similar period of time to encourage them. The MAF flight that swooped out of the clouds to deposit them into our lives also took Pamela out, after a brief but full visit of reconnecting with life and friendship here. So more hugs, introductions, hellos and goodbyes. Pat and I took Dr. Naomi almost directly to a burial, perhaps an inauspicious first hour in Bundibugyo, but somehow appropriate. The oldest daughter of a prominent community leader died of AIDS yesterday, and pretty much everyone we know had turned out to show solidarity and sympathy. As we walked away from the grave with the crowd, I got a phone call: Please come to the health center RIGHT NOW, we have more visitors.
So Scott and I biked down, to find most of the staff milling about, and within a few minutes an entourage of four fancy SUV's pulled in. Dr. Sam Zaramba, the Director General of Health Services for the country of Uganda, had arrived. This senior official serves at the very top of the government health structure, second only to the Minister of Health himself. He was accompanied by Dr. Amone who has become a friend and supporter of our work since our ebola days together, and by our chief of health in the district Dr. Sikyewunda, and a half dozen other officials from the Ministry in Kampala and from the district. They toured the health center, which is seems has a national reputation as one of the most functional health centers in the country (!). At one point Scott had the opportunity to give his focused and articulate advocacy speech: with facts and figures he explained how the patient care at Nyahuka Health Center is equivalent in volume and service level to that offered at the hospital, with 1/20th of the budget. After the tour we all sat down with the staff, and these officials thanked "the Dr. Scotts (that's me too!) and World Harvest Mission" for the support in buildings, personnel, training, drugs, and equipment . . and mentioned specifically that Scott attended to Dr. Sessanga when he had ebola and when NO ONE else would go in his house, which spoke volumes and has not been forgotten even now . . .it was a little embarrassing but OK we admit kind of nice. However the most hopeful thing: Dr. Zaramba was the one who came up with the whole health system structure for Uganda, and he declared that highly performing health centers should have different budgets than barely functional ones. As his underlings took notes he promised to address the budget, and increase it!
I was asked to open the meting in prayer, and then as they got ready to go they asked me to pray for "traveling mercies" once again. I really loved the opportunity to pray by name, loudly, for the health leaders of this country. Amen.
Posted by DrsMyhre at 11:56 AM

Dear "Scotts", that is a wonderful and I am sure encouraging tangible blessing in recognition of long and faithful service. I am sure whatever is done by th eMinistry will be modest, but the fact that you are a "role model" clinic has tremendous value in its own right. Even a little manna is still manna. God bless and keep you all, and I thank Him for providing days like these even as we remember the days of ebola. Love and prayers, Craig and Lisa