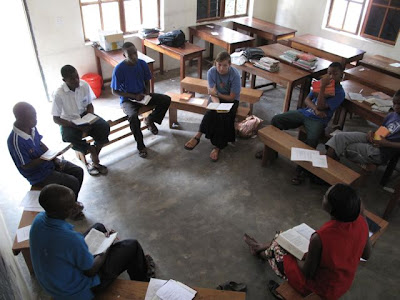 Scott stood up in the time for nkaiso, testimonies, at church today, to give God glory for working through a very challenging and unknown process over the last few months culminating in the unanimous vote of the board on the new Head Teacher (see post below). So much remains to be seen, but we have to affirm that prayers have carried us through everything up to this point and trust that the Spirit has been leading. How could a dozen people from different language groups, skin colors, education levels, genders, ages, experiences, with different goals and hopes, otherwise agree? If Scott had sorted through the paperwork alone and presented his choice, he might have felt more in control of the outcome, but there would not have been the sense of community ownership and spiritual intervention. We are grateful.
And this outcome fits into a general pattern of movement, risk, change, hope, that we and others sense. A few posts below I wrote about background anxiety. We knew this was a crucial weekend, and asked many to pray. I am not on the board, but invited all our team and all the CSB staff to join in an extended prayer time during the board meeting, quietly and on-the-side asking God to move. The chaplain seemed to catch the vision for this and announced it to the school. He requested me to type up a list of prayer requests, and I asked him to lead or delegate the leading of the time. Fine. But on Saturday morning, I found the room locked and no one waiting to pray. I had envisioned a significant coming-together of most of our team and most of the staff and even a handful of students. Instead one CSB staff and one missionary joined me and a half-dozen boys. I had had a vivid, disturbing dream the night before which I wrote down that morning (something I RARELY ever do, but it seemed to combine all the anxieties of the last weeks). As Eunice opened, she described dreams three people had told her that week, and all were very similar to mine, and led to a sense of need for prayer. Africans put a lot of stock in dreams, more than we tend to. If it stirs people up to pray, then that's a good outcome. I only wish it had stirred more!
But my testimony is: it was a great day. I enjoyed the time with Eunice, the counselor, as we prayed through the book of Ephesians. We prayed against deep patterns of destruction that have been etched for centuries in Bundibugyo, we prayed for love, for unity, for wisdom, for change. And the handful of students joined in. When the lunch bell rang, Eunice asked them if they would like to go, or take a break. No, they replied. So on we prayed. Instead of people coming in and out, the small group stayed the WHOLE time. I kept wondering when the rest of the people invited would show up (only one more eventually did). . but mid day God brought to mind the story Gideon in Judges 7. He mobilizes an army, but God whittles the group down to a mere 300 men, to show that He does not need numbers to accomplish His will. So those few boys and we few women were who He wanted to pray for that day. 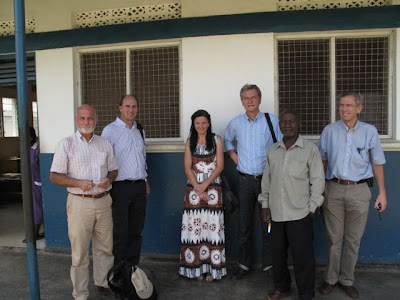 And in the 24 hours since, here is more testimony. The biggest, that a new Head Teacher emerged. But more things are happening. A group of Dutch doctors from a Christian NGO showed up to meet us . . . never heard of them before, but there they were saying they wanted to find medical projects to fund. A young man in whom we invested deeply early in our time here who had been taking wrong turns for seven years stood up in church today and became a Christian. Another young man gave a testimony of God working in his life. Worship was lively. My child, whom I worry about having friends, spent a whole day hiking with a group of boys yesterday and had a great time. Some students asked if they could volunteer to teach Sunday School at church. All of these remind us that the Spirit is moving. Stay tuned.
Posted by DrsMyhre at 3:53 AM

I have loved reading the posts over the past few days. Encouraging news.
Debbie Ferguson